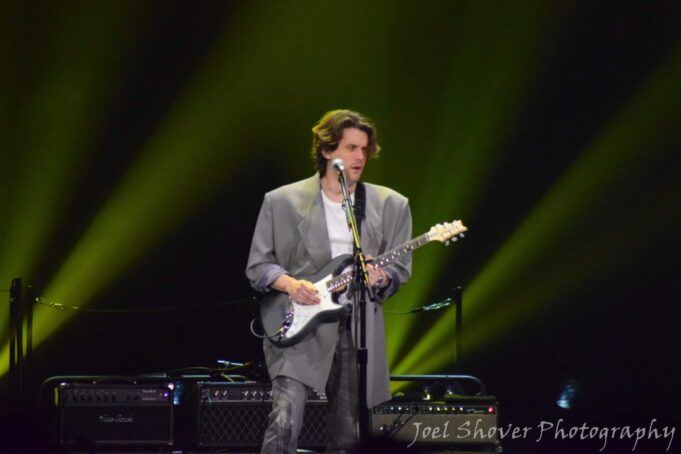 John Mayer’s Sob Rock Tour paid a visit to South Florida with a stop at the FLA Live Arena on Saturday night April 2nd 2022. The tour train is now making the turn onto the final stretch after completing a run of west coast dates that included many bust-out-deep-cuts including “Age of Worry”, “I’m on Fire”, “Clarity” “Walt Grace Submarine Test January 1967” “XO”, and the long awaited, “Assassin” that John graciously dusted off after twelve long years. What would John have in store for us loyal fans here in Florida? Perhaps we get a Dead tune tonight, I mean Dead & Company did cancel out Florida last tour and didn’t even include them for this upcoming summer tour.

It really wouldn’t be a complete night in Sunrise, FL without a little rain shower to start the evening. Fans made their way into the FLA Live Arena and were greeted by smiling friendly staff. Looking around I notice that there really weren’t any long lines as the arena had numerous merchandise booths set up along with a vast array of food and beverage refreshments. It’s safe to say that the staff at FLA Live Arena knows how to put on a show, and every one of them knew how lucky they were to be working tonight!

The Opening act for this portion of the Sob Rock tour is YEBBA, a singer and songwriter from West Memphis, Arkansas that became well know for her talented viral vocals on an episode of SNL with Chance the Rapper. Her bee-bop melody had the crowd warming up.  I tell you first hand I could feel her passion flow through her music and so did the whole arena as she received a standing ovation.

Who was that tall guy on bass that looked oh to familiar in a ball cap? Pino Palladino was doing some double duty on bass for Yebba playing hits like “Stand”, “Louie Bag”, “October Sky”, “Distance” and “How Many Years.”

Full gallery of photos from this show by Joel Shover here.

It was now time for the Sob Rock train to come rolling in the packed arena. John Mayer and his band hit the stage rocking the new single “Last Train Home”. The tone for the evening was more soul-full than the previous shows of this tour that I’ve seen on the east coast, and by the sounds of the bass I’m starting to believe the rumors that Geddy Lee left the perfect soundcheck bass combo written on the walls backstage.  Palladino’s sounds were distinct in every note to the enjoyment of the crowd.

“Belief” was next with John on the black PRS Silver Sky and he showed the near sold-out crowd that he can JAM! Another hit from Sob Rock is “Wild Blue” that featured amazing visual lighting along with the guitar mastery of Mayer. You couldn’t help but wonder if Mark Knofler was in the house for that number.

Every concert goer’s favorite tune was rolled out next with “Who Says”. I’m still planning that trip to Japan. Mayer took us into a short jazzy blues filled “Moving On and Getting Over.” Next, “Waiting on The Day”, from Paradise Valley, was the near bust out that we would get here in South Florida. This was the second time John has played this song this tour. It shows that Mayer is really embracing the fans pleas to play the deep cuts we love so much off his albums.

“Helpless” featured Greg Phillinganes going back and forth with Mayer and then performing a little Keytar solo.  “Neon” solo acoustic followed by “Stop this Train” a fan favorite as well as “Free Fallin” had every cell phone light in the house on! It’s a great feeling to look around and know that you’re part of something that is so emotional special. Mayer wasn’t done pulling heart strings, I mean it’s what he does, it’s his job, so save your battery life and enjoy the show!  “Queen of California” was next and that had the whole crowd singing once again, did they ever really stop?

This took us into the closest Grateful Dead wawa sounds that we would get of the night with “I don’t trust myself with loving you” this featured the magic fingers of Isaiah Sharkey noodling back and forth with John Mayer. I overheard a fan saying “You know you’ve made it when John Mayer plays rhythm guitar for you!” The talent on this stage is unbelievable. The grieving ballad of “I Guess I Just Feel Like” had the crowd singing with anticipation of the jam portion of the song. This song just keeps evolving to parts unknown and were loving every minute of it.

My favorite off the new album was next and in another form. A slowed bluesy “Shot in The Dark”. John could take this song in any direction and it will win the hearts of every fan.  Prince’s cover “The Beautiful Ones” masterfully sung by David Ryan Harris took us into another setlist staple and sing along “Slow Dancing in a Burning Room” as John had the FLA Live Arena sing a verse.

Mayer then informed the crowd that they were going to hear the next song no matter what and with some very laughable banter “Your Body is a Wonderland” came next. Almost every John Mayer fan you meet would tell you they love the lyrics “Keep Me Where the Light Is”. I mean who wants to be in the dark unless you’re a shot, right?

“Gravity” was next but even that couldn’t pull the South Florida fans from the Sob Rock High as they screamed for more. The band returned with “All I Want is to Be with You” they closed the show with John confirming he is ready to be a star with a song that featured a lot of videos of the crowd on the screens, as they were all now shown in a “New Light”

Go See Live Music……. Till The Next Show…. Joel

Half of My Heart
(Snippet/banter)

Moving On and Getting Over

Waitin’ on the Day

I Don’t Trust Myself (With Loving You)

Shot in the Dark

Slow Dancing in a Burning Room

Your Body Is a Wonderland

Encore:
All I Want Is to Be With You

FULL SHOW AUDIO, use the arrows to toggle between songs.

Full gallery of photos from this show by Joel Shover here.