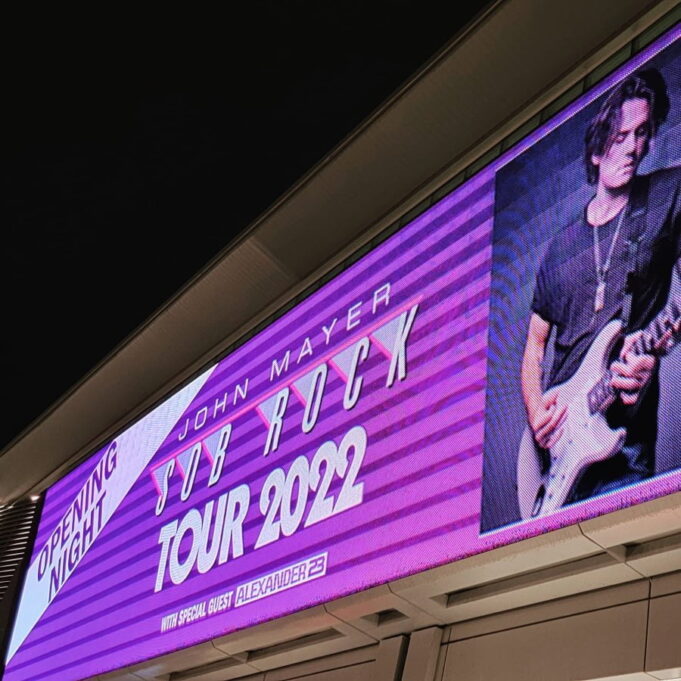 What opened in January 1990 as The Knickerbocker Arena with a performance by Mr. New York himself, Frank Sinatra and has since hosted legends in the music industry such as Eric Clapton, The Grateful Dead, Garth Brooks, Phish and the now infamous November 16, 1991, Jerry Garcia Band show.

Now this venue boasts the name MVP Arena and how appropriate MVP John Mayer returns to kick off his Sob Rock Tour. This show marks Mayer’s fourth return to the Cap City, and the fans came out in droves from all over the world.

John Mayer chose Alexander 23 as a supporting act for the Sob Rock Tour. As Alexander 23 took the stage with confidence, we later found out that this very live show was indeed his first! They played a nice 30+ minute set including the well-known Tears for Fears cover “Everybody Wants to Rule the World” as the crowd shuffled into the MVP Arena.

Check out Joel’s review of the Los Angeles SOB tour preview with tons of video.

This place was already heating up as fans as young as 4 months old were ready to hear John Mayer. That 4-month-old will learn in ten to fifteen years if not sooner that they were indeed at the right place at the right time for they were going to see a true guitar legend hiding out in his rock & roll band.

This is the era of SOB ROCK as John Mayer stated to the sold-out crowd after performing the tour opening song from the latest hit album Sob Rock, “Last Train Home.” John did not need long to warm up he was straight fire and playing off the muses right into the next smooth jam “Shot in The Dark” also from the album Sob Rock. The band then tapped into the multi-platinum album Continuum for the hit song “I Don’t Trust Myself with Loving You.”

Check out Joel’s review of the Los Angeles SOB tour preview with tons of video.

It was now time to slow it down with a sold-out sing-along with “Who Says” from another certified platinum album Battle Studies. The band continued to open the catalog further from the album The Search for Everything with the rock ballad “Love on The Weekend,” where John did a little lyrical change much to the enjoyment of the audience. So now we are only five songs into a setlist twenty-one songs deep and the place is on fire.

Albany New York never disappoints and neither does Isaiah Sharkey as he and John noodled back and forth on the next single from The Search for Everything, “Moving on and Getting Over.” It was back to Sob Rock for “It Shouldn’t Matter but It Does” as the Albany fan choir sang along word for word. John stayed with the acoustic guitar and brought out “Rosie” another fan favorite from The Search for Everything.

When I say John Mayer can JAM, I mean John Mayer can JAM as he did on the next song evoking empathy from the crowd with “I Guess I Just Feel Like,” Sob Rock. We were now all “Helpless,” from The Search for Everything, as Greg Phillinganes jumped up center stage with his Keytar to face off with Mayer, by the crowd’s response we all knew that a part of the 80’s was now back upon us in a new and curious form. The show kept rolling even when the band played “Stop This Train,” from Continuum.

It was now time for the crowd in Albany to self-reflect with the Folky Blues Ballad “In the Blood,” from The Search for Everything. We were living on the wilder side of the light with “Carry Me Away”, The Search for Everything. We were about to be treated with something very special. After a little stage banter from John, he dusted off “Your Body Is a Wonderland”, Room for Squares, a song that has not been played by John with a full band since 2004! The crowd was ecstatic. The now dark MVP Arena had only a spotlight on the stage that only meant one thing in a space this hot. It was “Slow Dancing in a Burning Room”, Continuum. John sang perfectly along with the sold-out crowd note for note. Now deep in the setlist, deeper than we ever knew, it was time for “Wild Blue”, Sob Rock.

Check out the full gallery of photos from that show here.

It was time to reel the crowd back in with the chart-topping hit “Waiting on The World to Change.” John Mayer and his band have been rocking and swaying this historic venue back and forth and the crowd has been waiting for the Grammy award winning song “Gravity.” The band then thanked the crowd and walked off the stage but Albany and those that traveled afar wanted more.

More is what we got as John grabbed the acoustic for the title track “Born and Raised.” This historic night of music starting off the 2022 Sob Rock Tour concluded with the hit that keeps lighting up phones in your drawer alone… “New Light” from the new album Sob Rock.

Get out and see this tour. Most importantly, Go See Live Music!!! Till the next show- Joel.

Check out the full gallery of photos from that show here.


Check out Joel’s review of the Los Angeles SOB tour preview with tons of video.