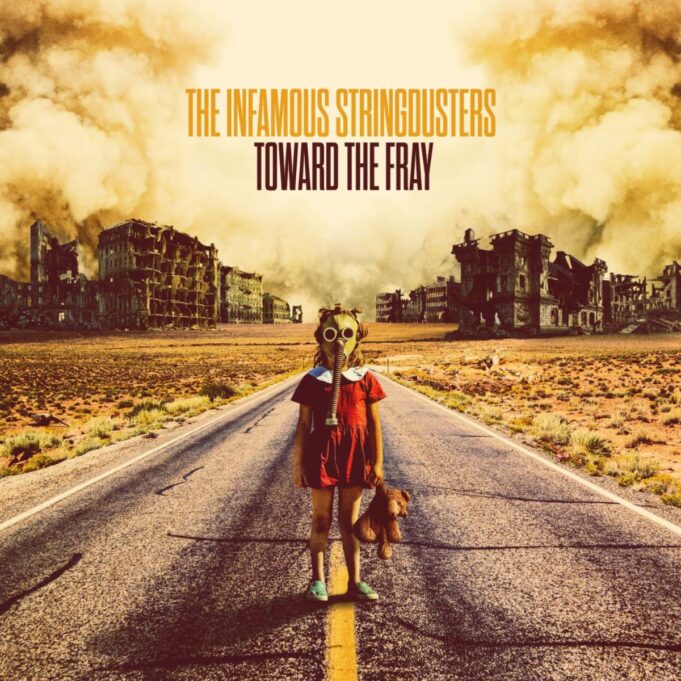 The Grammy Winners Showcase Their Personal And Musical Evolution On New Album Toward the Fray; available today. Announce Tour Dates all over the US for 2022.

February 18, 2022 – Denver, CO – The title track of The Infamous Stringdusters’ new album Toward the Fray finds the song’s narrator making a decision to get involved, rather than just comment on the sidelines; a thread that weaves through the GRAMMY-nominated band’s entire release, directly reflecting a pivotal moment in its members’ collective consciousness.

Deeply affected by the killing of George Floyd, with eyes wide open to how the world works for everyone, the Stringdusters set about educating themselves on being better citizens of this country and beyond, while making Toward the Fray. “All five of us took that opportunity for our consciousness to evolve, and we took the responsibility seriously,” says Stringdusters bassist, Travis Book. “That’s what I hear when I listen to this record. The songs are very honest and real, but what other option do we have?” The most real take away from their time of reflection comes in the form of album track, “I Didn’t Know,” written by the band’s fiddle player, Jeremy Garrett alongside legendary bluegrass songsmith Jon Weisberger, and with accompanying drumming courtesy of Circles Around The Sun’s Mark Levy—making this the very first Stringdusters album with drums.

Throughout the process of writing and recording Toward the Fray—and over a large break in touring—the Stringdusters’ musicianship has continued to blossom into near-mastery. “Our new album, Toward the Fray, is the beginning of a new chapter in our journey as a band. Music brought us all together some 16 years ago, but life and our evolution as people, not just musicians, is what keeps us together and keeps things interesting. Now we have something to say, and the experience to seize that moment in a meaningful way,” says Stringdusters banjoist, Chris Pandolfi. “Maybe this is just a first step in this new direction, and we are certainly not claiming to have all the answers — after all, the irony of growth is that there is a humility in it. But as we gain a sense of awareness and responsibility, we want to do everything we can to honor that and do some good in the world. That’s what this album is all about.”

“To me, the theme of Toward the Fray is about dealing with your problems head on, rather than running away from them,” says guitarist Andy Falco. “One of the things that I’m really proud of is that this record is true to all of us. It’s a genuine record because it really is about everything that we were all going through. We’re talking about the pandemic and all of the chaos, but we’re talking about love and other things, too. We were able to reflect and dive deep and look inward during all of this. I hope people who hear these songs will feel like they’re not alone. That’s what we always hope that people can relate to in our songs—that we’re all in it together.”

In addition to the release of Toward the Fray, the Stringdusters and their label, Americana Vibes, are pleased to announce a partnership with Colorado’s Arapahoe Basin Ski Area which officially kicks off on April 16. The Basin, as it’s known to skiers and snowboarders, is known for its extended ski season–oftentimes bleeding into the July 4 holiday weekend. “The Basin has long been known for spring skiing and a laid back and welcoming vibe,” shared Jesse True, Director of Marketing at Arapahoe Basin. “In this crazy time, skiing at the Basin has become even more important to our guests, it is a place where we can all come together and enjoy the outdoors. We feel like the Stringdusters and Americana Vibes really match our culture, and what better way to celebrate spring skiing than a day at the Basin for all things Dusters?!”

The April 16 event is set to include live music by Americana Vibes artists, a full-bar takeover by Denver’s Station 26 Brewing, on-site activations from the likes of Cheeba Chews, Rosenberg’s Bagels, contests, games and more. More information will be announced in the coming months.

# with The California Honeydrops and Karina Rykman
^ with Dustbowl Revival

For a full list of tour dates and ticket information, please visit thestringdusters.com/tour.