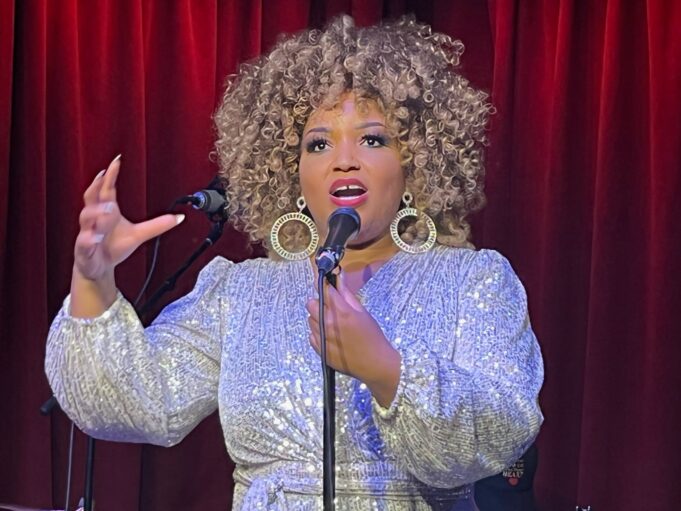 Marisha Wallace, a Broadway and West End star and lauded singer, recently graced Hotel Café’s Main Stage with an outstanding performance that featured a whopping 19-song set comprised of original (“I Know Where I’ve Been,” “My Declaration,” “My Future” and “Miles and Miles”) and cover material that included  (“Valerie,” “Take Me to Church,” Eye of The Sparrow,” “Purple Rain” and “Am Telling You I’m not Going”).

All selections were compelling show stoppers and really moved the audience. Wallace has quite a remarkable voice with expansive range that is very powerful but she also knows to hold back, too. As a singer Wallace can expertly scale back on a song to showcase all its subtleties, shading and nuances as well. She was tastefully accompanied by her backing band that featured Dominick Sanchez on guitar, Will Birckhead on bass, Erskine Hawkins on MD, piano and King Robinson on drums.

Special guest songwriter/producer Toby Gad also joined Wallace onstage and played piano on a new song “Loved By You”  which is part of a bigger collaboration for an upcoming Etta James musical. Gad has worked with Beyoncé, John Legend and Madonna and many more prominent and contemporary artists.

Wallace has released three albums to date: Soul of the Stage, Alice and Sunset. Now, her latest, fourth LP, Tomorrow, was made during the COVID-19 lockdown and she recorded it from her couch in her adopted home of London, England. Marisha Wallace, who was born in New Bridge, North Carolina, had an important and inspirational message to share with her audience at Hotel Cafe. “We are the survivors of this pandemic. We are all out tonight. Please live your life and get past your fears.”

That was exactly what Marisha Wallace is doing on her current tour. This bold memorable show demonstrated Wallace’s mettle and also put new meaning into the phrase “all-around entertainer.” Wallace, who has an effervescent, dynamic and ballsy personality, touched upon so many layers and aspects of her life between songs. A new follower could say after seeing this performance that they had a real sense and essence of who Wallace is beyond the glamour and glitz of her showbiz career.

Those many credits include (“Hairspray,” “Dreamgirls,” “Aladdin,” “Waitress,” “Book of Mormon” and “Something Rotten”). But, when the lights are down, so to speak, reality sets in for all of us. The same exact thing could be said for Wallace. In fact, she wasn’t afraid to bare her soul and get real with everyone in the audience.

Wallace spoke candidly about her failed marriage to a man that has mental health issues. She said she has tried to cope with very tough times in her personal life expressing both sadness and despair. This happened while Wallace had to deal with lowest of lows while trying to balance that with the highest of highs because her professional career was on the upswing. Clearly, it was a tricky and paradoxically challenging thing to do and come to terms with for her.

Despite the upheaval, Wallace has come out on the other side stronger as she shared with the crowd being more self aware and evolved. Her journey put her in a place to take things in stride and appreciate life and the many blessings it has to offer. She also encouraged everyone to say Hi to their neighbor and embrace them. That positive moment had a very friendly, church vibe feel to it. She also spoke seriously about the BLM movement and its effects on her as an African-American woman. Also she shared with the crowd how singing “I Know Where I Have Been,” in Hairspray portraying Motormouth Mabelle, was a profound experience for her. The hit Broadway play was about segregation and integrating a dance show. In fact, Wallace’s father went to the first integrated high school.

Wallace’s larger-than-life show at Hotel Cafe was one her fans and new followers won’t soon forget. This multi-talented artist is the total package and it was an extraordinary performance by this one-of-a kind gifted artist.