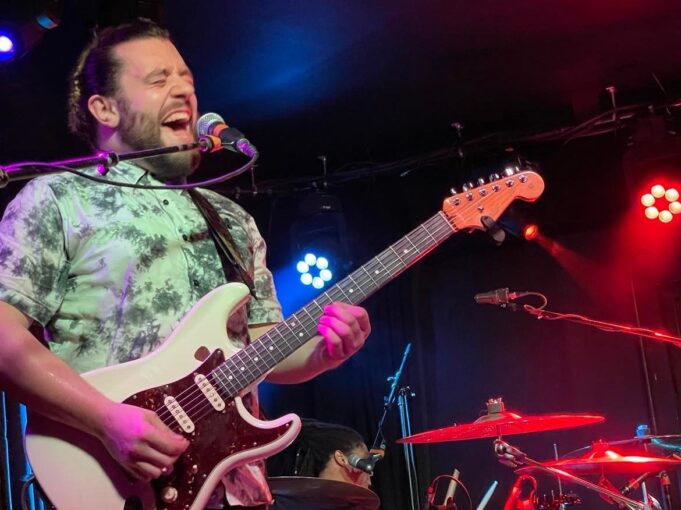 On November 10 2021 the Nth Power played at Woodlands Tavern in Columbus, OH. by Cam Elkins

With creating art, intention is everything. As fans, we feel the emotion of the “why” behind artists’ performances in our guts. Some musicians make music for fame, for likes, for the pop charts, etc… The Nth Power is playing a different game.

The Nth Power is a living embodiment of doing everything for the right reasons. You can feel it from their demeanor alone. Music is a spiritual thing… it is healing, it inspires us, and it brings us all together. The Nth Power performs with a clear acknowledgement of just how powerful music is. Their intention to play music with passion, purpose, and inspiration is obvious and was extremely palpable in Woodland’s Tavern on Wednesday, November 10th.

For those who may not know, The Nth Power is a goosebump-inducing soul trio made up of Nikki Glaspie (drums, vocals), Nick Cassarino (guitar, vocals) and Nate Edgar (bass). The group formed during an impromptu late-night jam session at the New Orleans Jazz Fest in 2012. Ever since then, they have been on a mission. The Nth Power is all about the healing power of love and, for them, music truly is a vessel for tapping into deeply moving emotional/spiritual energy.

“Music is what brought us together, but it’s the spiritual bond that makes us play so in touch with each other.” – expressed Nikki Glaspie, Beyonce’s former world tour drummer.

The trio plays with a vigor and joy that is authentic as it gets. Regularly throughout the show, Nate Edgar would be laughing in awe of just how awesome the jams were. They frequently communicate and react with amazement at each other’s improvisational phrases. Between their soaring harmonizing and hypnotizing rhythms, Nth Power really gave us all a soul trio gospel choir spiritual experience. They were totally locked in, completely on the same page.

The band was extremely present to the moment throughout their entire 2-hour mind-blowing set. During banter between songs, someone from the crowd yelled that it was their friend’s birthday. Immediately the band busted into a “happy birthday” funk jam.

Another moment that I have to mention here is the band’s performance of their original song “I Will Never Leave You.” This song was inspired by and written as a tribute to Harold Robinson Foundation, a program for youths from underprivileged communities in South Los Angeles. Nick told a story of just how touched and inspired they are by the work the organization does to help these kids growing up in a really tough place. After this tear-jerking ballad, the band let the crowd know that they were accepting donations for the Harold Robinson Foundation at the merch booth. Donations can also be made here.

At the beginning of the show (about 8:15pm) a number of people were sitting down but by the end of the night, the crowd was filled with people dancing and going crazy. After the encore, mostly every person in attendance was applauding and cheering at the top of their lungs. After the show, a friend of mine was literally in tears, totally moved by the band’s performance.

In my book, sincerity is at the heart of what it means to be a great musician (and at that — what it means to be a great human being.) The Nth Power is an unbelievably sincere band. The three of them wear their hearts on their sleeves and are guided by a higher purpose. As fans, we live for the unforgettable shows where musicians bare their souls on stage. In this regard, The Nth Power is in a league of their own.

“We are the Nth Power… and we are on a mission.” said Nikki Glaspie between songs. “A mission to heal the world through music.”

This tour is in support of the new album “Reverence” which was featured on the first-round ballot for 2022 Grammy nominations.