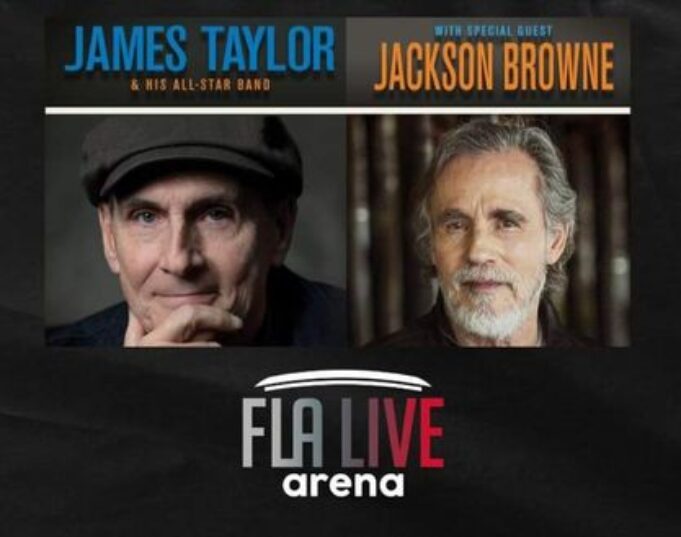 The night started with a sudden downpour as I made my way into the FLA Live Arena in Sunrise, FL. This night was a long time in the making as the show was originally scheduled in 2020 but postponed due to the pandemic. I was finally going to check off a box on my bucket list. I was going to see Jackson Browne. And if that wasn’t enough, he was playing with the legendary James Taylor.

Through the cheers I couldn’t help overhearing the comments referencing the dugout song from the classic movie, Fast Times at Ridgemont High. He then went into The Barricades of Heaven, The Long Way Around, and the first of two songs from the album Late from the Sky, which is hailed as 1 of Rolling Stone’s Top 500 Albums. The Fountain of Sorrow. After this he jumped right into the title track from Downhill to Everywhere, followed by The Dreamer, and Until Justice is Real. Doctor My Eyes came next and gave the crowd the shot that it needed to get them out of their seats dancing. Late for the Sky was the next treat.  This song resonated through me as with every note his voice carried through the arena just as good, if not better, than it sounded when it debuted in 1974.

As Jackson Browne, took a moment to catch his breath he introduced the band then invited his good friend James Taylor to join him on stage to perform The Pretender. But they weren’t done yet. The duo then played Running on Empty to the thrill of the crowd as we entered set break.

The lights came up as they began preparations for James Taylor. I have seen James Taylor perform in several different venues from the lawn at the scenic Tanglewood Performing Arts Center in the Berkshires in New England to Shreveport, Louisiana and the West Coast in San Diego, California. And now in South Florida. And no matter where I’ve seen him his music never disappoints. His songs show versatility as he can go from soothing to a blues sound and anywhere else the music may take him. Listening to James is like spending time with your best childhood friend. He opened with Country Road and then went into one of my all time favorite songs Copperline.

I was moved by his next song, That’s Why I’m Here. He dedicated the second verse to his late friend John Belushi and the last verse to his fans. He went on to explain that what happened to John changed his life and turned him around to recovery. He then acknowledged all of the people at the show who are in recovery themselves by saying One Show at a Time. He also told the other fans not to worry as they were plenty of songs to get tore up to.

James then played the fan favorite Mexico which included horn and drum solos.

This song was followed by You Make it Easy, Line ‘Em Up, and Steamroller in which he brought the Blues to Sunrise. He then went into Easy as Rolling Off a Log and from his second studio album Sweet Baby James

played the title track and Fire and Rain. Next was Carolina on My Mind, Shower the People, How Sweet It Is (To Be Loved by You) which brought the crowd to their feet wanting more. The encores started with Shed a Light and James brought out Jackson Browne to perform a rendition of Take it Easy which was written by Browne and the late guitarist Glenn Frey from The Eagles.

Then the duo performed the Grammy Award Winning You’ve Got a Friend which was written by Taylor’s long time friend Carole King. The show closed out with You Can Close Your Eyes.

Overall, Jackson Browne and James Taylor put on a terrific show. The experience of seeing two legendary musicians share a small stage was unforgettable. They each could have easily put on their own shows but instead they treated their fans to an intimate night of pure talent. I leave you with the words of James Taylor himself, “The secret to life is enjoying the passage of time.”    Till the next show……