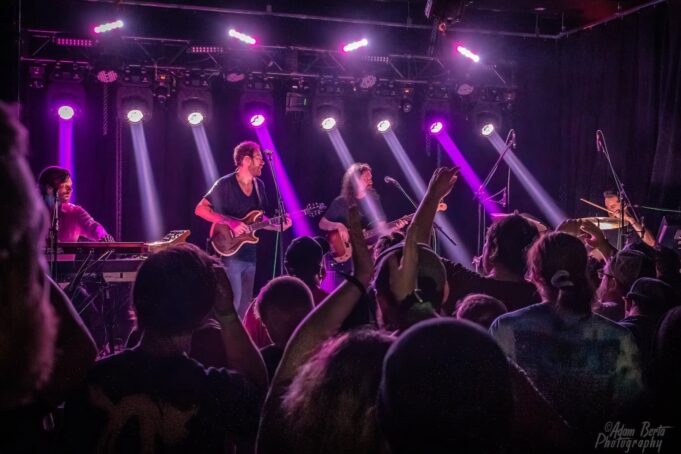 Friday was The Werks at Summit Music Hall, a medium sized venue in Columbus, OH.  I bought my ticket the day of the show. I hopped in the car that night to check out my first show at what turned out to be a pretty cool venue.  Upon arrival, I bought a Werks T-Shirt and said hi to some new and old friends.  The crowd was friendly and the service was great. I met a bunch of cool new people before the show even started.

The band was tight and the show was good.  For the Werks, this was a smaller venue than they would normally play.  The light show was really good, and the crowd was into the music.  After the sound man brought up the keyboard in the mix, the band sounded better than ever.  It was good to see Chuckie Love back onstage (he was the band’s original bass player), and he burned it up on the bass.

Houser’s tone was incredible.  His solos were fitting for the show, because this was a different version of The Werks than I had seen before.  This was a newly refined band, where guitar solos weren’t the driving force of the band, but instead the players listening to each other and riffing off each other like trained Jazz musicians.

The photos are from The Werks Facebook page where you can keep track of upcoming dates and band news.

It had been six years since I’d seen them, and they had recently released the Magic album.  Magic is a serious album recorded at Sonic Lounge, and it took the band a lot of artistic investment to complete this album.  I believe recording an album this good has truly changed them.

The Werks are no longer a guitar hero band, but more of a tasteful, less bombastic band that has put a lot of work into getting where they are.  The Werks toured the U.S. for 14 years, and in 2019 they went on hiatus.  I believe they will continue to progress, and patch up their bones as the demand for them increases.

These men aren’t just good musicians, but soldiers who have fought the war and won, coming out victorious and made from scratch.  Yes, they had humble beginnings, and yes they had to push hard to get to the level they are.  But growing a band from a grass roots following to becoming a national act is a feat as hard as they come.  Play on gents, and go at your own pace.

I was there in the beginning, and I’ll be there for you all the way to the end.

Not from this show: