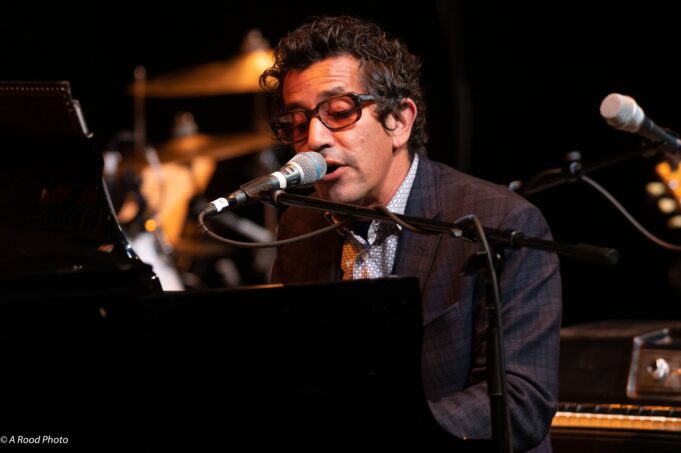 As indoor concerts gradually return to Southern California, Pepperdine University’s Lisa Smith Wengler Center for the Arts has scheduled a full slate of shows on the Malibu campus.

Among the first few of the 2021-22 season was an appearance by A.J. Croce and his Croce Plays Croce performance. Croce’s program is an intimate tribute to his father’s life and music, cut tragically short nearly five decades ago, focused solely on the 18-month output from the early 1970s that catapulted him from coffeehouse folk
singer to national sensation.

Check out the full gallery of photo from this night here.

A.J. was backed by a three-piece band, including former Dr. John bassist, David Barard, along with Garrett Stoner (Nashville-based) and drummer Gary Mallaber (L.A.-based and a veteran of Steve Miller Band and Van Morrison) for a comprehensive, 22-song set loaded with Croce hits and deeper album cuts. From the opening “Don’t Mess Around with Jim” to the touching “Time In A Bottle”- the latter, A.J. explained, his father wrote to him as a baby- the subdued and thoughtful evening played as much as a showcase for A.J.’s own distinct talent as it did as an homage to his father’s incredible work.

Jim Croce’s voice carried a signature tone, and it’s too much to ask of anyone to replicate it. A.J., wisely, kept to his own prodigious vocal ability, caring for the songs melody and mood without approaching imitation. It’s a tough line to hold, but A.J. did so with a veteran’s aplomb. And, even as Jim’s introspective folk lent itself to quieter interpretations, A.J. did take more than a few opportunities to show that he and his band could push the tempo and the amps, driving the acoustic set finale, “I Got A Name,” to a rollicking finish.

As a considerate tribute, Croce Plays Croce covered just about everything a fan could expect. With A.J.’s stories and sentiment, though, it was elevated beyond a mere musical homage. Instead, the evening felt more like a family reunion, gathering an audience that was once again hopeful, as A.J. sang, for a better day.

Check out the full gallery of photo from this night here.