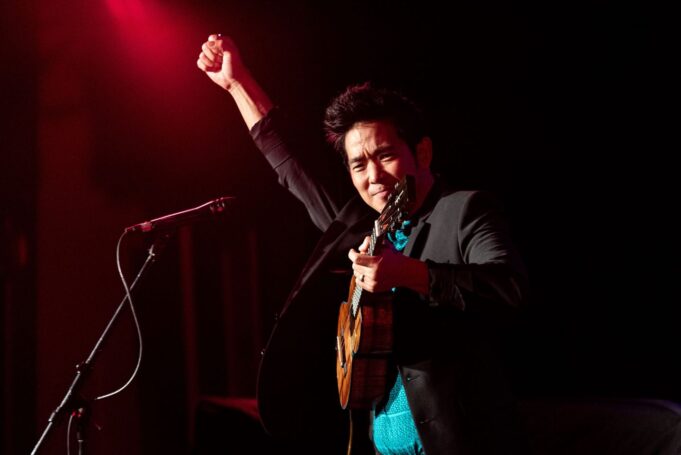 Shimabukuro typically performs in larger venues, but has kindly continued to return to this intimate setting because of his decade’s long history of performing at TCAN. Shimabukuro took the stage on his own soloing on the ukulele opening with Ukulele Five-0.

On Over the Rainbow, a Uke standard, Jake sang literally one word, smiled and then said “see why I don’t sing?” and continued on with a beautiful instrumental rendition of the classic song. Blue Roses (with opening segues from My Life & Hallelujah) enchanted the audience and gave way Something in the Way She Moves Me – which is on his new album.

Jake Shimabukuro‘s new album Jake & Friends is officially available on November 12th 2021, though audience members at his live shows can snag an early copy.  The album is Jake on his instrument forming duets and trios with singers.  I got one for myself and most look forward to track #15.

Pop Quiz!  Track 15 features this chanteuse who was raised in Hawaii, singing her first hit, a song named after a flower.

Pianoforte – amusingly no pianos involved, but Shimabukuro played the song through once, recording it on a guitar pedal as he played. Then he looped and played it a second time along with the recording therefore accompanying himself. (a la Ed Sheeran)

Next up was Let’s Dance – in a flamenco style. Shimabukuro was then joined on stage by bass player Jackson Waldhoff for the rest of the show.  The sonorous sounds of the bass added depth and variety to Jake‘s wonderful ukulele. 143 – an original song of Shimabukuro’s who’s title is based on the pager code for I Love You.

A highlight of the night was Sonny Days Ahead, from his new album, in which the song is performed as a duet with Sonny Landreth – though as a solo for this live audience. The duo performed the Beatles classic Eleanor Rigby, and their interpretation was a dramatic up tempo version of the classic that everyone in the audience new. Ichigo Ichi: which is a Japanese word – you have to go to a show live to find out its meaning!

Another Beatles classic, While My Guitar Gently Weeps – was delivered in a funky yet dramatic interpretation of this beautiful song. The set drew to a close with a flurry of Orange World, Dragon, and finally perhaps the most classic of all classic rock songs, Bohemian Rhapsody.

Encore: Kwaka – this is a traditional Hawaiian song – Shimabukuro explains that it is the Stairway to Heaven of ukulele songs.  A must learn, must play song for all aspiring ukulele players.