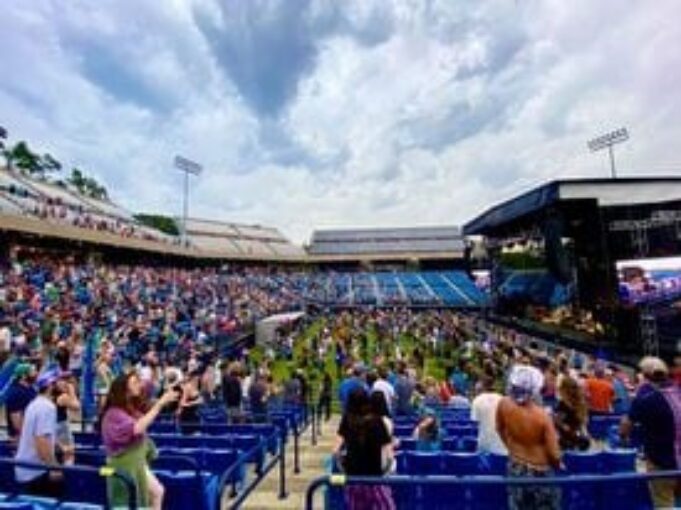 This past Saturday evening, Joe Russo’s Almost Dead performed the second show of their second run at the Westville Music Bowl in New Haven, CT. The band’s last run at the Bowl was accompanied by torrential rainstorms that lasted the entire Memorial Day Weekend. The rain returned with a vengeance during Saturday’s portion of this weekend’s run, and many fans were unprepared. However, the band’s astounding performance made every moment of standing in the rain worth it.

Due to traffic on Connecticut’s Merritt Parkway, we arrived at the lower lot of the Bowl just at showtime. As we made our way through the security checkpoint at the main gate, we heard the band go into “They Love Each Other”. We raced down the concrete steps past thousands of fans to the Astro Turfed GA section and found our pod, which was on Scott Metzger’s (right) side of the stage. The crowd was already in the spirit of things due to the warm weather and dry skies that night.

Bob Weir’s original song, “Gonesville” came next; nearly taunting the inevitable downpour that night with the lines, “Will you stand by me in the pouring rain,” and “Well they say it might rain forever, but it sure can’t rain on me”. Following the sweet, sad song was “Cumberland Blues,” which had every fan on their toes. Throughout the jam, the band teased “Whipping Post” by The Allman Brothers Band.

Next came “Row Jimmy,” which inadvertently summoned rain showers that lasted the rest of the show. The downpour thickened throughout an unfinished “Mr. Charlie,” and a bumping “Viola Lee Blues”. Joe Russo’s Almost Dead closed set one with “Brown-Eyed Women”, which was absolutely the highlight. Despite the inclement weather the crowd danced, sang, and threw their hands in the air. Some folks took cover inside of the Bowl, but many were thankful for a little rain to cool them down after such a hot first set.

Joe Russo, Tom Hamilton, Marco Benevento, Dave Dreiwitz, and Scott Metzger returned to the stage around 8:15 pm and opened their second set with a remarkable “Here Comes Sunshine,” which lasted almost twenty minutes and featured intricate guitar work by Hamilton and Metzger, along with impressive vocal work by the entire group. Although there were no referential teases throughout the jam, the band created a song within itself; almost allowing the fan to forget its origins.

“Here Comes Sunshine” was followed by “Uncle John’s Band,” which turned out to be one big Westville sing-a long. Friends and loved one gathered each other in their arms and swayed to the soothing melody while the rain came down even harder than before. From “Uncle John’s Band,” the show began to heat up once more. The band surprised the crowd with, “Alligator,” sending us all into a dance trance. Metzger’s voice brought high, funky energy into the song, along with interplay between Russo and Benevento.

“Alligator” blended with “Man Smart, Woman Smarter,” which featured a “Reveille” (Morning Bugle Call) tease by Metzger. The crowd clapped along with the stomping beat of Russo’s drums and sang the chorus back to the band. And as if the crowd wasn’t already fired up, the band went into a monstrous “In Memory of Elizabeth Reed,” which featured a Joe Russo drum solo and “Dark Star” tease by Tom Hamilton.

The band closed their second set with an emotional “Peggy-O,” which seemed to hush every talker in the crowd. The only thing louder than Hamilton’s sweet vocals and guitar playing was the pitter-patter of the rain throughout the stadium. At the end of the ballad, Joe introduced the band and thanked the crowd once again for enduring the rain at Westville.

For their encore, the band performed “My Brother Esau,” and the crowd sang along once again. By the end, nearly every member of the crowd was soaked to the bone, but the rain had not washed away a single smile that night. Rain or shine, we were all just happy to be seeing live music together again and we couldn’t wait to return for the Sunday show.