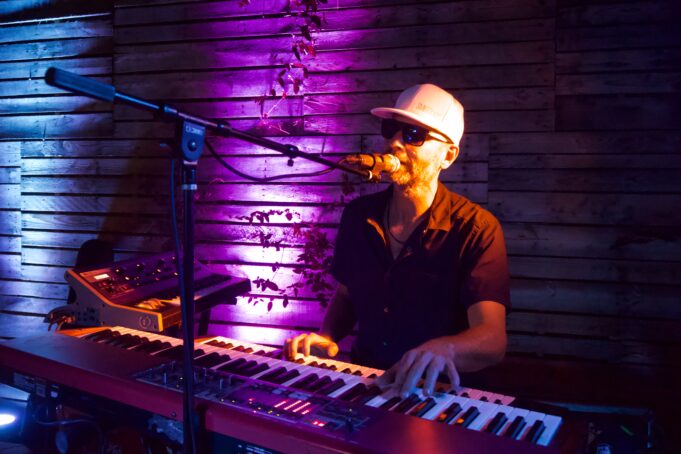 In light of a summer season without major entertainment events, some smaller local venues have been able to improvise and provide a platform for live music, while keeping attendees safe and socially distant. Hartford eatery New Park Brewing has been able to do just that, with an outside dining space which seats couples and small groups at tables in front of an intimate stage setup. Since the beginning of July, the brewery has been holding their “Summer Stage” concert series, which kicked off with an acoustic show from popular jam scene guitarist Tim Palmieri, and which featured other favorite acts from around the state such as Joon and Shakedown.

This past Friday, the venue hosted the organ funk collaboration project Beau Sasser Trio, led by the keyboardist for regionally famous funk and rock acts Kung Fu and The Z3. For this project, Sasser is joined by fellow Kung Fu member Adrian Tromontano on drums and guitarist Justin Henricks of the Albany, NY soul band Wurliday. The show, like a few others in New Park’s concert series so far, was sold out ahead of the day, a level of interest that was clearly reflected in patrons’ enthusiasm coming out strong through the end of the evening’s performance. In the spaces around their respective tables, brewery attendants danced and cheered, almost like a regular small concert.

Organ trios are uniquely fun for a number of reasons, but not least of all because the keyboardist usually handles bass lines with one hand while holding down melodies and solos with the other hand. Such is the case with Beau Sasser, who’s formidable skills ride a line between a clean, soulful sound and a flair for the improvisational. Paired up with Sasser is his Kung Fu rhythm counterpart, Tromontano, who’s gung ho style on the drum kit blends fluid fills with a constant ferocity via a heavy hand. Hendricks also plays well beyond his years, but even more intriguingly he bends to a variety of guitar styles. On a few songs late in the evening, a country-jazz style from him echoed that of greats like Chet Atkins and Roy Clark and was a cool contrast to the deep funk feel of Sasser and Tromontano.

The most spirited reactions to The Beau Sasser Trio throughout this night came in the wake of instrumental covers of old standards, like the beautifully played version of Aretha Franklin’s “You Make Me Feel (Like a Natural Woman) that opened the second set, and the hot rendition of Steely Dan’s “Peg” that sparked up a little improvisational jam.

New Park Brewing continues with their summer concert series on August 22 with a show from Among The Acres, and concludes on August 29 with a special acoustic show from Boo Yah, the jam collaboration project made up of members from West End Blend.

Oh, check out the search feature up in the upper right corner (the magnifying glass.) Search for your favorite band, venue, genre, festival- you may be surprised at what you find on the site- there is a ton of original content, audio, video and more. Enjoy!