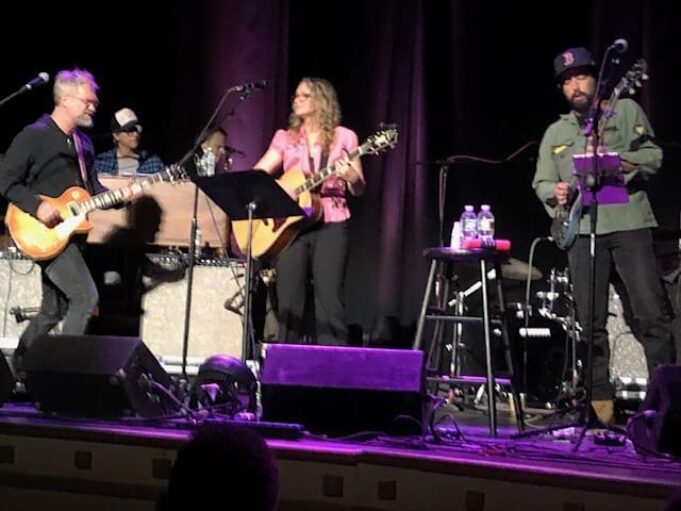 Singer-songwriter Joan Osborne, helped by fellow singer-songwriters Anders Osborne and
Jackie Greene, put a new spin on the songs of Bob Dylan Nov. 29 at the Cabot Theatre in
Beverly, MA.

The show, called Dylanology, featured interpretations of Dylan songs from just about every era.

Osborne, known for her 1996 hit, “One of Us,” has been performing the Dylanology show off and on for a few years and this was the third time I’ve seen it. The first time was in New Orleans, where she was accompanied only by a pianist. It was a great, but low-key, show.

The second time was at the Wilbur in Boston last year when she brought a full band, plus guest stars Anders Osborne (no relation), and Robert Randolph. That was a high-energy show that had her doing the songs very differently than at the solo show.

This show, with Osborne and Greene as guests, blew both of those away.

Some songs were faithful to Dylan’s original versions, while others were rearranged. Many were deep cuts that Dylan rarely plays.

She opened with “You Ain’t Going Nowhere” and it was a pretty faithful rendition, and Osborne and her band sounded very tight. She has two accomplished guitarists who put plenty of power behind her.

Joan Osborne and her band did a few songs, including “High Water” and “Trying to Get to
Heaven,” before being joined by Greene, who formerly played with the Black Crows and often plays with Phil Lesh. Greene did a masterful job with his songs including “Lord Protect My Child,” “Sweetheart Like You” and “Senor (Tales of Yankee Power).” His voice is gorgeous and perfect for the seriousness of these songs. His guitar playing is also masterful.

After a few by Greene, Anders Osborne took the stage — and the band was now at full force. He did a number of songs including “The Man in Me,” “All Along the Watchtower” and “Cold Irons Bound.” His blistering solo on “Watchtower” blew the roof off the place. His rendition of “Cold Irons Bound” reminded me of why that is my favorite Dylan song. Osborne, one of the great guitarists to come out of New Orleans, blasted through it with his usual energy and inspiration. Nobody plays with more feeling.

After a short break, Joan Osborne and the band returned for more. Among the highlights were “Highway 61 Revisited” and a couple from Blood on the Tracks, including “Buckets of Rain” and “Tangled Up in Blue.” Both were performed pretty faithfully and she executed them perfectly. She has a sneaky-powerful voice that seems well-suited to the songs of the greatest songwriter ever. She sings and shouts with abandon, something you would not expect if you knew her only by “One of Us.”

Anders Osborne and Green then returned to the stage for more, including a couple from Dylan’s Christian period, Including “Gotta Serve Somebody” and “Saved.” I wasn’t much of a fan of the Christian period, but those are fantastic songs and Joan and band and guests played them with abandon.

With her band’s two guitarists plus Anders and Greene slashing and powering the up-tempo stuff, it was an electric guitar fan’s dream. It was rock and roll pure and simple. Greene managed to take turns on guitar, Hammond B-3 and drums. Joan picked up an acoustic a couple of times but mostly sang simply banging a tambourine. She also got behind the drums a few times. As she danced and shimmied around the stage, it was obvious she was having fun.

Half the time they seemed like they were making it up as they went along, with either Joan or Anders using hand signals to alert the band that it was time for the bridge, or the chorus or to keep going or simply to end. They were all having a blast and the show went on for three hours.

A standing ovation resulted in a two-song encore. I think the man himself would have approved.

Michael Lasalandra is a music fan and artist who paints musicians, among other subjects. His work may be seen at mlasalandra.com