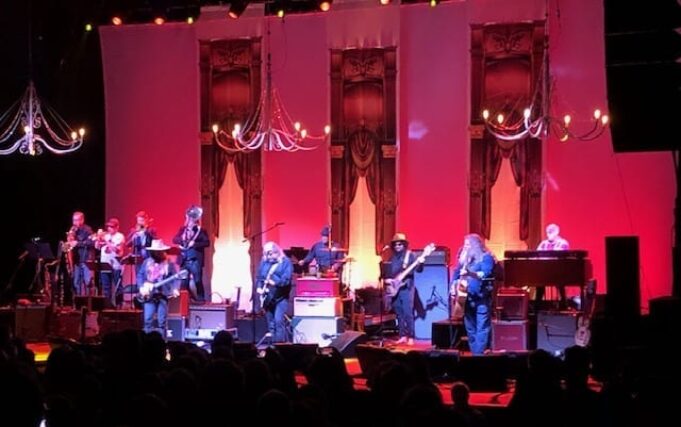 The Band’s legendary farewell concert in 1976 — known as The Last Waltz — was recreated in spectacular fashion Nov. 10 at the Orpheum Theatre in Boston by a supergroup of musicians headed by guitarist Warren Haynes. Documented on film by Martin Scorsese, the movie, also called The Last Waltz, is generally considered the greatest concert film ever made.

Haynes, who was a member of the Allman Brothers Band for many years and heads his own group, Government Mule, was aided by a host of stars culled from a wide variety of musical genres, including country, blues, funk, rock and Americana.

Among those playing in the tribute show in Boston were Lukas Nelson (Willie’s son) of Promise of the Real, Jamey Johnson, Dave Malone of the Radiators, Cyril Neville of the Neville Brothers, producer and bass player Don Was and several more, including a full horn section.

I’ve seen an awful lot of shows this year and none was better than this one.

The Band, one of the most influential groups in rock history, became famous as Bob Dylan’s backup band. They later went on to record a number of classic albums that pretty much kick-started a genre now known as Americana. The farewell concert was held on Thanksgiving, 1976 at the Winterland Ballroom in San Francisco.

The tribute tour, which is stopping in 13 cities, is being produced by Robbie Robertson, The Band’s original guitarist and songwriter. He is only scheduled to play at the Nashville show set for Nov. 23, however.

While it would have been nice to have seen Robertson at the Boston show, honestly, he wasn’t really needed. Guitar duties were more than capably handled by Haynes and Nelson.

The three-hour show saw the band cover many but not all the songs performed by The Band at the farewell concert. Included were several that had been sung at the original performance by guest stars such as Bob Dylan, Neil Young and Van Morrison. The songs were not done in the exact order as the The Band did them, however.

There was a palpable buzz of anticipation in the air as soon as I entered the theatre 45 minutes before the show started. It grew as the hour approached. When the band hit the stage, just before 8 pm., the sold-out crowd was on its feet cheering.

The show kicked off with Johnson singing “Up on Cripple Creek,” one of Helm’s signature tunes. Johnson did a nice job with it without trying to sound like Levon.

That’s one of the things I liked most about the show. This is not a “cover” band in the traditional sense. They stayed true to the songs, not changing the arrangements, particularly the horn arrangements which were played from the original charts devised for the 1976 show by Allen Toussaint. But they weren’t trying to sound just like The Band. That would be impossible. I saw them twice in the 1970s, at Harvard Stadium and at Symphony Hall. They were the pinnacle.

Vocals and guitar leads were shared by Haynes and Nelson, and smartly neither tried to duplicate Robertson’s leads or the vocals of Band members.

These guys just played the songs with their own touches – and played the hell out of them. After starting with “Cripple Creek” and blowing through “The Shape I’m In,” sung by Nelson, then “It Makes No Difference,” originally sung by Danko and considered by many one of the greatest rock vocal performances of all time. Haynes and Nelson handed the vocals nicely. It is a tough song to sing. Both sing in high registers and were able to do Danko justice.

In all, they steamed through 23 songs, including those done by some of original concert’s many guest stars. I’d say the highlight of the night was “Caravan,” which was done originally by Van Morrison in an unforgettable performance in a jumpsuit, kicking his leg high as he walked off. In this case, Haynes did the vocal and did a fine job, though he did not do the famous leg kick. The performance was so good that Don Was, the bass player and famous producer, could not help but vigorously applaud Haynes.

There were guest stars at this show too, with Dave Malone of the Radiators, and Cyril Neville of the Neville Brothers tackling a few songs with New Orleans origins, including “Down South In New Orleans.”

Bob Margolin, who played with Muddy Waters on the original concert, also came out and thrilled the crowd with some vicious slide-playing.

In all, the show was all it was advertised to be — and more. I’d love to see the Nashville show, but that’s not likely to be. Nevertheless, I came away very happy that I was able to see the Boston show. It was one for the ages.

Michael Lasalandra is an avid music fan and an artist who paints portraits of musicians, among other subjects. His work can be seen at mlasalandra.com.

Set List
Cripple Creek
The Shape I’m In
Stage Fright
Georgia
It Makes No Difference
Down South In New Orleans
Who Do You Love?
Wheels on Fire