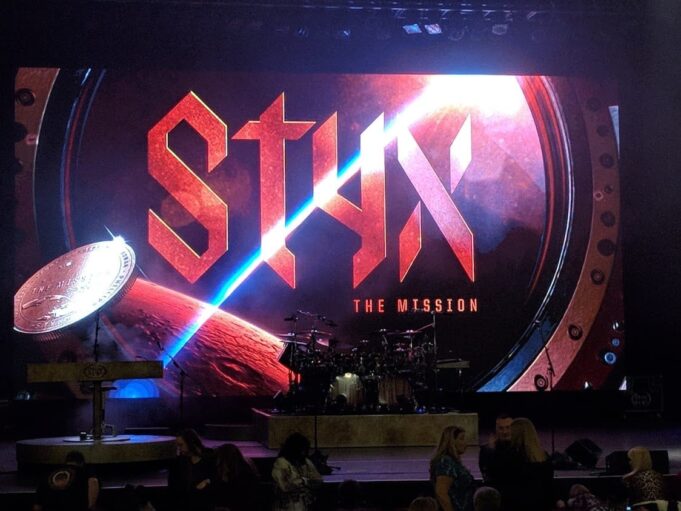 Classic rockers Styx return to Boston to play the Orpheum Theater on November 09 2019.

In 1983, my friends and I were definitely very into Styx. The Kilroy Was Here album had just come out and it was constantly in my walkman. So when it was announced that they were coming to our area on tour, my best friend Ira and I started planning. We got up before dawn and biked probably eight miles across into the next town to get on line and get tickets at our local Ticketron. We scored tickets not only for ourselves but for all of our friends.

About two weeks before the show, I was horrified to learn that Tommy Shaw had broken his hand and they were postponing the tour. They did reschedule the date but to a school night, and too my additional horror, my mother would not let me go. “Not on a school night.” No amount of my begging could convince her. My opportunity was lost, and Styx remained a missing piece in my live music puzzle.

Until now. On November 9, 2019 the band that is Styx came to the Orpheum Theater in Boston, MA. I say ‘the band that is Styx’ because like many classic rock acts, the original band members are not all together. This band is anchored by Tommy Shaw on guitar and vocals and James JY Young on guitar and vocals. Dennis DeYoung, who had played keyboards and sang and wrote many of the hits for Styx left the band twice, ultimately some twenty years ago.

He was replaced by keyboard and vocals man Lawrence Gowan who still appears with the band. Original drummer John Panozzo passed away over twenty years ago and his brother continues to play but suffers from health issues. The band brought in Ricky Phillips to handle the majority of bass guitar duties along with some backing vocals. Boston’s music school, Berklee, produced new drummer Todd Sucherman who had an enormous drum set onstage.

So all history duly noted, we went into the historic Orpheum Theatre which has hosted musicians in downtown Boston for more than one hundred and fifty years and on this night it was full. Prior to the band taking the stage there was an announcement letting us know that the show would be two sets, and that set one would be a complete rendering of the Styx’ current album, The Mission. On the one hand, who wants to see the new album of a classic band?

On the other hand- this band of great musicians spent a long time writing and creating this new album and they’ve invited us to hear it. I mean- I’m game.

The album is good- and the band’s performance was excellent. The majority of the songs were sung by Tommy Shaw, but Gowan sang a few, and even James Young had his own lead vocal for one of the new songs. The material leans toward the earlier periods of Styx’s history, classic compositional rock with slight prog rock leanings. Vocals combined with dueling guitar leads, symphonic arrangements, and syncopated rhythms. The songs all revolved around a space theme and the band’s execution of the album was excellent.

After a short intermission the band came on for the second set and they came out hard. “The Grand Illusion” was as very logical opener and had all of the bombast that the song requires, with Gowan capturing the keyboard sounds that the original featured. Throughout the entire show the twin guitar stylings of Young and Shaw were on point- trading licks or playing in harmony with each other with the practice and ease that nearly fifty years together would develop.

Tommy Shaw took over the vocal duties with “Blue Collar Man” and “Fooling Yourself.” And it was during these tunes that Shaw erased all doubt that he is a rock star capable of fronting a huge band on his own. I didn’t realize that the majority of the guitar solos were Shaw’s until this show. Young certainly takes plenty of solos but Shaw is truly a guitar slinger and a front man any time he wants to be. The band came together for a group vocal exercise in one of their earlier hits “Lady.”

This lineup is polished, and a fully realized classic rock juggernaut.

I was very pleased when James Young took center stage and errupted into his song from The Grand Illusion album, “Miss America.” He still delivers with plenty of gruff and bluster and ripped leads with abandon. One of my only disappointments in this show was that I expected more James Young songs- conspicuously absent from the set list were great songs like “Snow Blind” and “Heavy Metal Poison” that I had hoped to see, but alas, that is a relatively small complaint.

OK, what about the whole ‘new lineup’ concept? How does it hold up? Actually, surprisingly well. They replaced Dennis DeYoung, an overly dramatic keyboard player with expert classic rock skills and great vocal abilities who can control a crowd with Lawrence Gowan- an overly dramatic keyboard player who can command the crowd with his vocals and parades around the stage with an energy that belies his age. Drummer Sucherman is a great drummer and he could capture both the band’s classic drum fills and was able to create his own distinctive sound on the newer material.

Ricky Phillips was a trip, too- he was solid on the bass, contributed excellent backing vocals, and struck some of the best ‘classic rock’ poses of the night. He several times found himself behind the drumset on a high riser, silhouette breaking up the images on the screen and adopting super rock star stances that were not pretnetious in their delivery, rather gave you the classic rock star vibe that you seek at a show like this. But his on stage maneuvers were eclipsed by the graciousness of the circumstance.

Twice during the first set, and for maybe four songs in the second set Phillips made way in the bottom end of the band for original bass player Chuck Panozzo. Despite health struggles, he looked pretty good and joined his band mates and Phillips stayed around to create a double bass section. These appearances injected all of the good feelings and nostalgia that you would want, and helped to cement the notion that this group of musicians is Styx, whether they are playing classics or bringing out new matieral.

The set continued with one classic after another including super hit “Too Much Time on My Hands” and the set closer “Come Sail Away.” The house was rocking from top to bottom as the audience got exactly what they had come to see- classic rock songs played by a beloved classic rock band.

After a very short departure from the stage Styx returned for the 1983 classic “Mr Roboto.” OK, I might not be thirteen anymore, and I didn’t get the full Kilroy was Here stage show, but the loss and grief I felt thirty five years ago was being lifted. As the Japanese lines “domo arigoto Mr. Roboto” rang through the Orpheum it was a full circle journey for me. It was very satisfying. I was frankly surprised by the inclusion of that hit, as it seemed to exemplify the material that caused the rift between the band and Dennis DeYoung, but rifts be damned, old grudges be damned, it’s time to just rock it out.

The show closed with a spirited rendition of the band’s early hit “Renegade.” Shaw amazed in every way you may have wished, as did the entire band. If you like the lush orcehstrations and emotional lyrical content of the band or this genre, do not hesitate to see Styx. They were great, and I’m going to call my Mom and let her know that I managed to right the wrong that I felt back in eighth grade. If we live long enough, we can right any wrong.

set one: The Mission in its entirety.