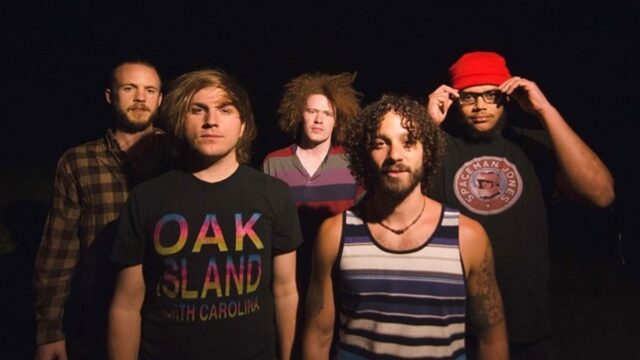 On their forthcoming release, Abominable Creatures, Asheville-based alt-rock hip-hop quintet Natural Born Leaders live up to their name; each track laced with empowering messages about standing up, standing out, and dreaming big. With lyric-driven anthems, lead singer and songwriter Michael Martinez injects a generous helping of social commentary into each verse, proving that music – and all forms of art – can be both consumed for enjoyment and digested with purpose. With influences ranging from the head-banging nature of Black Sabbath and Metallica, to the old-school energy of Outkast and Lauryn Hill, Natural Born Leaders weave rich bass lines, sexy brass and electrifying guitar solos into a sound all their own. Paired with the charisma of frontman Martinez, the long-playing debut of Abominable Creatures is ripe with some of the most revolution-stirring antics one can sneak into a six song collection.

We were very pleased to catch up with Natural Born Leaders and had the opportunity to ask them a few questions:

There seems to be an influence from a lot of different corners of the modern rock landscape. I specifically hear a Morphine influence; is that purposeful? Which band member does that come from, do you think?

Honestly, I asked around and none of us listen to Morphine. That’s the idea behind what we’re doing though. We want everyone to listen to our music and be able to find something familiar about it, all the while creating something entirely different and new. I did listen to some Morphine after this question though, and I can hear some similarities between our guitar player (Rex Shaffer) and our sax player (Ben Survant) in the mix, but neither are actually influenced by the band. Most likely, they’re probably influenced by whomever Morphine is influenced by.

There aren’t a lot of bands that list both the Fugees and Pantera as influences. How do you go about taking this incredibly diverse set of influences and come up with a sound that combines those elements?

We do it without thinking about it. We kind of just like to do what sounds good to us, sans the lame cheese and overtly obvious “trying” to fit any specific elements together. We start every song with a blank canvas and try to work out what sounds good and what would have the most impact. We all listen to all kinds of music and we try to make songs that express that without pigeonholing ourselves in any specific genre box. Hopefully one day that’ll be the way of the future.

Does the word fusion give you hives?

Yes…we aren’t a fusion band. We’re just a band with many, many, many different and contrasting elements. The bands that label themselves as fusion bands would most likely agree.

Asheville, NC is a hotbed of music – what about that town is leading to this outpouring of music do you think?

It’s a place where we can all come and actually do this professionally. The people here (and a lot of the people that visit here) value original music and I think that’s what separates Asheville from a lot of music cities across the country that like to chew up music we’ve all heard a million times and pass it off to the masses again for re-consumption. Asheville welcomes originality with open arms.

How has being in Asheville helped to shape your band?

None of us are from Asheville, so by us moving here and happening upon each other accidentally (because Asheville is such a small town), that’s really how Asheville shaped us.

This fall, Natural Born Leaders can be found traversing the continental United States in support of Abominable Creatures, bringing the gospel of grassroots hip-hop to a club near you. On the heels of a packed summer touring schedule – including appearances at Mile of Music Festival and the band’s first ever West Coast run – NBL will be making their way through much of the Southeast before landing in their hometown of Asheville, NC to rock The Mothlight on November 2. A list of upcoming tour dates can be found below, with more to be announced in the coming weeks.

An Exclusive Interview with Macy Gray