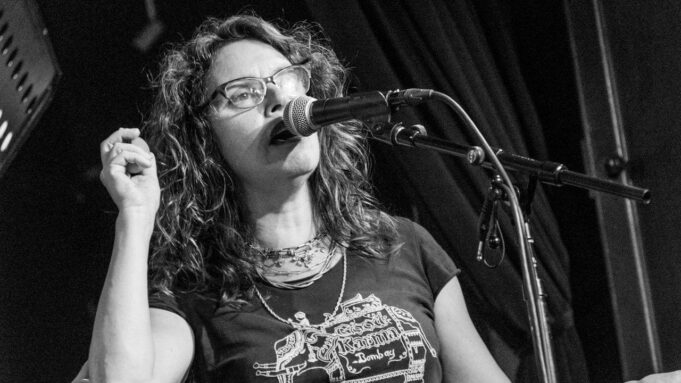 It was a special night at TCAN- that is, the Center for the Arts in Natick- as NYC-based folk artist Lucy Kaplansky graced the stage for the first time in 16 years. The singer-songwriter is a self-professed big fan of the venue and the long, single set that was mostly spontaneous proved that.

It was a solo show and Kaplansky mostly played guitar. Notable exceptions included the one song she performed on mandolin, and the two she played on piano. The single set lasted for a healthy 1 hour and 45 minutes and kept the audience engaged by performing requests shouted out from the crowd! The setlist, mostly undecided till showtime, included a cover of “Ring of Fire” by Johnny Cash. Even her encore was a request from the audience.

Keeping with the unconventional theme of the evening, Kaplansky performed a brand new song- which she hasn’t totally finished- and took emotional feedback from the audience.

She also performed “Old Friends” about her friendship with fellow folk artist Shawn Colvin. (Colvin produced her first album, after they had been duet partners in the Greenwich Village music scene in the 1980s.)  They had a falling out some time ago and recently restored their friendship.

Kaplansky sang a song, written by her father Irving Kaplansky, about pi- he was a mathematician and musician. Yet another highlight from not your average performance!

In an interesting move, her current album and album of her father’s songs are only available at a show or on her website- not at any of the big online sellers nor streamed.  She explained that streamed music results in almost no money for the artist. A listener has to appreciate the integrity in our technology-dominated world to maintain some control over one’s catalog of work.

She explained her decision in an interview last year with Northampton, MA’s newspaper, the Daily Hampshire Gazette:

Streaming services have decimated CD sales just in the last six or seven years. You can make a CD and no one will buy it. They’ll go to Spotify to listen to it. And I decided to try something different. In addition to just selling it myself and not going through a record label, it didn’t go to streaming services. If someone wants to hear it, they have to buy it.
And I think it’s going really well. I’ve sold quite a lot of them through my website and at shows. It’s a completely different model and so far it seems to be working pretty well. It’s incredibly empowering.

Kaplansky was warm and generous, clearly enjoying the evening with the audience. She was an engaging storyteller, sharing anecdotes of past and present, and was a gracious performer. Let’s hope it won’t be another 16 years before she graces the TCAN stage again!