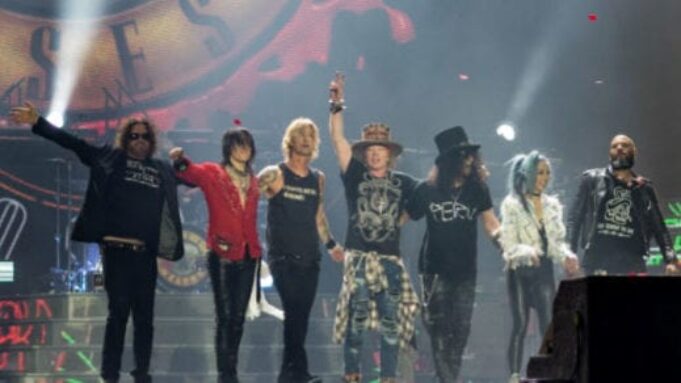 Guns N’ Roses have enjoyed a stellar career that has spun over hundreds of shows and a 30-year career. But, throughout their time on the road, there have been performances that have stood out more than most. That shouldn’t come as much of a surprise since some music acts are made better with the atmosphere of the fans in attendance.

The band now consists of Slash, Rose, McKagen, Dizzy Reed, Richard Fortus, Frank Ferrer and Melissa Reese, which shows the band has transitioned down the years into what it is today. But, what are the three performances that stand out more than most over the course of their illustrious career?

This night changed the lives of all members of the band forever. It would be the first time that all the original members of the band would perform together as Guns N’ Roses. The people in attendance went crazy as they took to the stage, and fast forward two hours they knew they were witnessing something very special and unique.

Of course, it wasn’t the first time that certain members had played together as some of them had played together with Road Crew and Hollywood Rose. But, this was the birth of a new rock era, and should this night not have happened then the whole history of rock would have been different. The venue at Troubadour in Western Hollywood remains a venue that is very close to the hearts and history of the band.

One of the most prestigious places to play music in the United Kingdom is in Birmingham. The city is the hometown of heavy metal god Ozzy Osbourne, and the public there know their music. The city played host to one of the best Guns N’ Roses gigs in recent memory across the pond, and it was almost as if the city had stopped.

The band turned up to the concert an hour and 15 minutes late, but the fans inside the LG Arena on that evening had already forgiven the band by the time that the start of Chinese Democracy began to play. The band had the 12,000 capacity in the palms of their hands throughout the show, and it’s little wonder that there were sore heads in the morning. The band were in excellent form, and this will go down as one of their best-ever European shows.

Guns N’ Roses played a host of special shows throughout their career, with an honorary mention to an iconic duet with Elton John at the Freddie Mercury Tribute gig. However, by the time that the MTV 10th anniversary show came around the band were already a mainstream attraction due to their high-budget videos that any normal person would need to win on the Novibet.co.uk casino to afford.

However, this performance may have been their finest hour. They shared the stage for an iconic set with Michael Jackson, and that catapulted them into a new stratosphere. The friendship between Jackson and Slash continued, as the band member contributed solos for many of Jackson’s biggest hits. But, this was a special night in the band’s history.