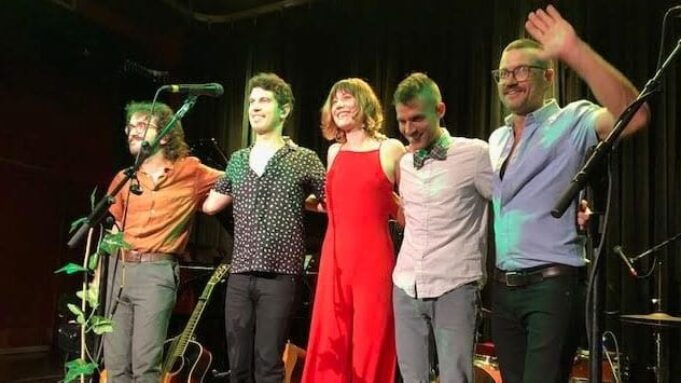 Bluegrass guitar prodigy and rising Americana star Molly Tuttle made a triumphant return to the Berklee College of Music July 9 for a sold-out show at the school’s Red Room venue.

Tuttle, who was touring behind her first full album, When You’re Ready, beamed as many of her former professors and former fellow students cheered her on. You could see how much it meant to her by the smile that never left her face all night.

And the album’s title suggests the child prodigy bluegrass flatpicker is ready to move beyond the bluegrass world. While the songs on the album — which she played pretty much in its entirety — have bluegrass influences, they are subtle. Her years at Berklee taught her the craft of songwriting. Her songs combine a little bluegrass, a little singer-songwriter, a little folk and a little pop. The combination has her on the verge of rising to the top of the Americana heap.

Some purists may not like it. One reviewer even compared her to Taylor Swift. I don’t know Swift’s music but I know one thing — she can’t pick like Doc Watson. Tuttle can come close with her unusual clawhammer flatpicking style. That’s why she was named Instrumentalist of the Year 2018 at the Americana Music Awards and Guitar Player of the Year 2017 at the International Bluegrass Music Association’s awards show.

At her Berklee gig, Tuttle performed in front of a tight four-piece band that rocked out pretty hard at times. Her voice isn’t powerful, its kind of wispy. But it works with the songs and the picking. Take the Journey is the song that is getting airplay and it kicks off with a powerful bit of playing. And the lyrics kind of say what she is doing: “No matter where it starts or where it ends, take the journey.” With her talent, there is no telling where that journey will end.

Country star Vince Gill, who started in the bluegrass world, said he moved into country because he got tired of traveling around in a van and wanted a bus. Gill is now in the Eagles. I’ll bet Molly gets a bus one of these days.

Another song that had the crowd grooving was Messed with My Mind, a kiss-off song that Taylor Swift might actually have written. I hear she’s famous for such songs.

Halfway through the show, the band left the stage to Molly and her guitar and she performed masterful covers of John Hartford’s Gentle On My Mind and Townes Van Zandt’s White Freightliner Blues. Each song had a long, complex, make-your-head-spin solo that made the night a huge success. whether or not you liked her new songs. I would have gladly paid just to hear those two. I’m still in awe. (See videos of both.)

I can’t wait until she comes back to Boston. I’m sure it will be in a bigger venue — and she’ll be traveling in a bus.