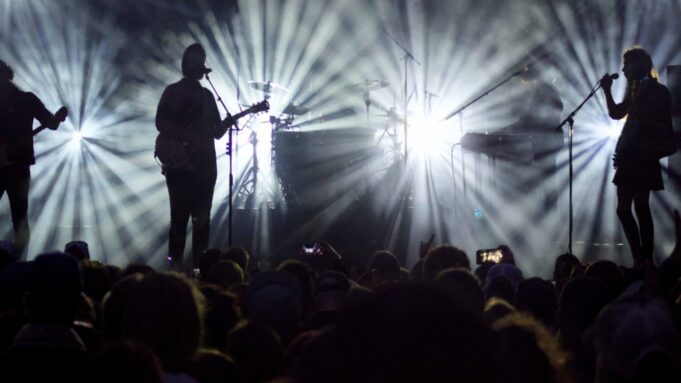 On September 14 & 15 2019, Burlington Vermont was the home of Grand Point North Festival by Miles Hurley

Last great festival of the summer season? First great festival of the fall season? Grand Point North is right on the line, going down during the midpoint of September last month, on the 14th and 15th of last month. Founded and hosted by modern rock icon in the making Grace Potter, Grand Point North is the two-day music exposition held at Waterfront Park, right at the bottom Burlington, VT. This year’s festival year saw the likes of rock and rollers like Gov’t Mule and Trombone Shorty, indie sensations Lucius, Rainbow Kitten Surprise, and up and coming folk players like Js Ondara and Michael Nau. Here are some of the best musical things seen from those huge two days at the bottom of Burlington.

One of the first acts we caught was Lucy Daucus, who is still a relatively new artist and yet witnessing some impressive popularity. Daucus champions the kind of moody, soft-centered yet rough-skinned indie rock that Burlington scene no doubt cherishes. After a welcomed version of her very popular song, “Night Shift,” Daucus addressed Grand Point North with an air of wonder and respect. “This might be one of the most beautiful places I’ve ever played,” she said. While she showed a serious focus for most of her set, Dacus and her band’s fantastic version of Bruce’s Springsteen’s “Dancing In The Dark” got the singer smiling big, and brought out the best energy from the other musicians. It was fully appreciated by her crowd of superfans and played enthusiastically by her band.

For sheer songwriting power, singer and guitarist JS Ondara easily vies for the top of any list here. Rich, impactful, poetic pieces like “American Dream” and “Saying Goodbye,” both of which this Kenyan-born artist performed at Grand Point North, are dream-like modern folk songs that could stand up with anthems written by defining artists of the 60s and 70s. Usually, J.S. has a full band, but here in Burlington he performed them wth only his own guitar and voice, and for that to capture many hundreds of people should speak to his ability as a performer.

In quite the contrast, Trombone Shorty took stage right after Ondara and they blew apart night one like a handful of dynamite. The band’s amass of talent, including full horn section, backup singers, and rhythm and multiple guitar sections, rushed the stage with an enthusiasm and tore right into a high energy song that had every member blaring away. To be on the rail, or really anywhere within sight of the stage at Waterfront Park, during this unrelenting set of funk was exhilarating.

Grace Potter took the stage around eight-thirty for her first of two huge headlining performances of the weekend, and what a properly powerhouse display she put on. Grace Potter is a multifaceted force all in her own presence: a rock and roll wild child, unpredictable in her moves on stage, yet a serious and esteemed musician that shreds on guitar, organ, and her hard-to-pinpoint voice. Her affinity for an old school sense of is matched with musical styles of pop, americana rock, even soul. At the height of their set, the band smashed through a colorful, frenzied version of Potter’s “Leave Me Alone,” which saw the front woman jump between organ and acoustic and electric guitar for a fully rounded, and wildly eccentric, performance.

Her kick-ass personage is also mirrored by a disarmingly cool feel for talking to the crowd with humor and passion. For starters, she unflinchingly and proudly, announced that “I hate James Taylor’s music.” Immediately after proclaiming such, she played a few measures of Taylor’s “Fire and Rain,” and then immediately followed up with: “See, I can do it. I just don’t f***ing want to!”

Having done a duo set just earlier this past summer, festival goers probably had high expectations for Warren Haynes’ and Grace Potter’s duet performance that occurred on night two, and from what we witnessed, the act lives up to the hype. Here were two time-tested band leaders, and their equally commanding stage presences only magnified immensely once brought together. Opening up with their shared hit cover of Fleetwood Mac’s “Gold Dust Woman,” the musical gravitas of the pair was brought forth immediately. Other solemn sounding yet impactful covers were CSNY’s “Find The Cost Of Freedom” and Blind Faith’s “Can’t Find My Way Home.” In really stellar and impressive style, Haynes and Potter transitioned between their duo act and Potter’s second headlining one, with the two of them starting on a version of Etta James’ “I’d Rather Go Blind” that was slowly joined by members of Potter’s band.

Yet the duo set was rivaled by the collaboration that saw the close out of Grand Point North: Grace Potter invited up indie darlings Lucius for a whole string of songs that they and the Burlington rock star recorded together this year—Potter’s newest album Daylight. Making this even more momentous was the occasion that Potter and her band, with Lucius, were performing this new album material for the very first time. As Potter brought Lucius up, she couldn’t help but comment on the the pair’s gloriously shining stage wear, and then managed to borrow a pair of giant fairy wings from a spirited member of the crowd. Four of the songs on the album were recored with Lucuis, and they rocked it live, especially it being the first time. They and Potter belted out supremely soulful, high energy vocals, in between laughing and smiling at the fun being had on stage. Lucius had performed their own musically masterful just earlier that day. When they kicked off with their megahit “Dusty Trails” as song one, it was game over.

One of the biggest draws for day two, competing in crowd size with Potter’s headlining set, were Rainbow Kitten Surprise. Surprise seems to fit as a band name, because it seems like only recently this five-member band has popped onto the scene, and yet they’re already a highly followed and celebrated live act. People were going crazy as soon as they stepped out onto the stage at Grand Point North. Musically, it’s a head scratcher (while being a really fun, and a really emotional time.) Pop and rap intercede with garage rock, indie folk blends with dance numbers. Their songs are truly unique conceptions of all these genres. Visually, as well, Rainbow Kitten Surprise are a real trip as well. When they’re not diving through the air or doing splits and rolls on the stage floor, the members of RKS are basking in surreal, beautiful light show that compliments their mystical music.

Towards the end of night two, Potter spoke about Grand Point North and the meaning of the festival—starting off with nostalgic reminisces about her own time coming up as a young musician and performing at locally treasured music spots like Radio Bean and Nectar’s. Making the connection between her rise to fame story and the many artists “Giving local artists a platform for their music and supporting them here in their scene, that’s what it’s all about.”

Put a Little Love in Your Heart (Jackie DeShannon cover)

Every Heartbeat (with ‘Fire and Rain’ by James Taylor snippet)

Nothing but the Water (I)

Nothing but the Water (II)

The Lion the Beast the Beat