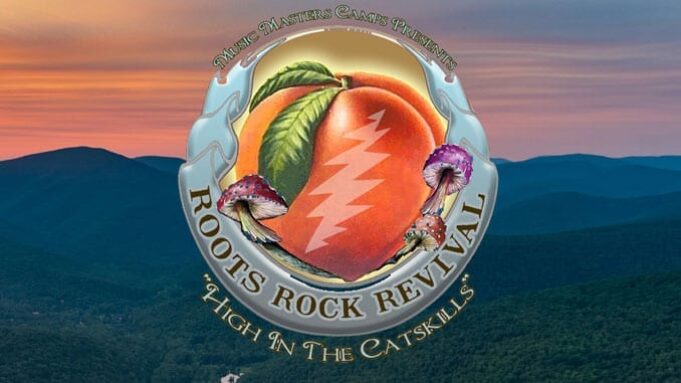 A few years back I heard about “jam band camp,” an annual event at the Full Moon Resort in the Catskills Mountains called Roots Rock Revival, and this year I was finally able to attend.  Conceived by the fine folks at Music Masters Camps along with Allman Brother’s drummer Butch Trucks, the 3.5 day/4-night getaway is now in its 7th year. While Butch’s presence is clearly missed, the torch is carried on by his son, Vaylor Trucks, along with a host of jam band titans like Oteil Burbridge (Aquarium Rescue Unit, Allman Brothers, Dead & Co) and Luther and Cody Dickenson (North Mississippi All Stars), other children of members of the Allman Brothers and Grateful Dead, and guests like Scott Metzger & Marco Benevento (JRAD), John Medeski (MMW), and members of Thievery Corporation.

Full Moon Resort is an idealic setting for this getaway focused on music and comradery.  Attendees are treated to intimate performances, panel sessions, master classes, yoga and massage, and 3 fantastic meals a day (if you plan to attend, prepare to need to diet afterwards) all with ample opportunity to jam with your fellow attendees (and maybe the guest musicians if you’re lucky).

It would be tough to recount everything I saw and experienced that week, but some highlights included:

1)    Learning from Grahame Lesh and Elliot Peck the “3 rules of Rock and Roll: 1) always be punctual, 2) never swear, 3) no mind/mood altering substances” all while they discussed vocal harmonization in Grateful Dead Music (there “might” have been children in attendance for this session)

2)    Telling Oteil Burbridge the story about seeing him perform for the first time 30 years ago while waiting in line for Filet Mignon, Salmon Pasta, and Shrimp dinner (“man, you’re making me feel old” he told me as his wife asked if he really had opened for Phish back then)

4)    Attending a guitar master class with Scott with Marco Benevento backing him up (best class of the week, but hey, I play guitar and Scott’s my new hero)

9)    Jamming with a bunch of musicians, both young and old, that all share a love for the Allman Brothers and The Grateful Dead

10) And, did I mention, eating amazing food the entire time?

RRR attracts attendees of all ages and music ability.  I particularly enjoyed seeing and playing with some of the young kids that were absolutely ripping up Grateful Dead classics like Franklin’s Tower, I Know You Rider, and Viola Lee Blues.

With the Grateful Dead and The Allman Brothers’ music firmly established as part of the Great American Songbook, RRR is a wonderful opportunity for multiple generations of musicians to get together once a year and celebrate both bands.  It’s a magical week and I look forward to returning.