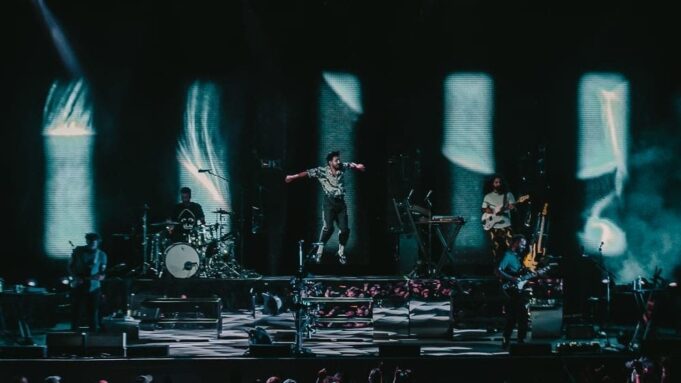 On Thursday, August 15th Fitz And The Tantrums and Young The Giant brought their joint tour to the Greek Theatre in Berkeley California. by Justine Willard

Fitz And The Tantrums started things off with an energetic set. They played a range
of songs for their fans who have been with them for the past ten years. They also
gave an exceptional performance of “123456,” a new and unreleased song.

Check out the full gallery of amazing photos by Justine Willard here.

Fitz And The Trantrums then sang their biggest hit to date, “HandClap,” which was by far the crowd’s favorite. The band had high stage energy, and the concert-goers were dancing and singing along to the music. At the end of their set, they took a moment to say thanks to all their music lovers for making their dreams come true.

The Greek Theatre is an outdoor venue and as the sun was setting that meant it was
time for Young The Giant to take the stage. The band brought out all the stops from
amazing visuals and lights to a trampoline on stage that lead singer Sameer was
bouncing on throughout the night. Young The Giant has also been together for ten
years, so they too had a lot of songs to showcase.

Many of Young The Giant’s songs have great messages to them. Before they performed their song “Firelight,” Sameer told the crowd that this song is about the monster inside all of us, which is our creativity that nobody can touch and what separates us from others.

The combined tour of the two bands came to an end last week. But the good news is
that Fitz And The Tantrums will be releasing a new album All The Feels on
September 20th so be on the lookout!

Check out the full gallery of amazing photos by Justine Willard here.