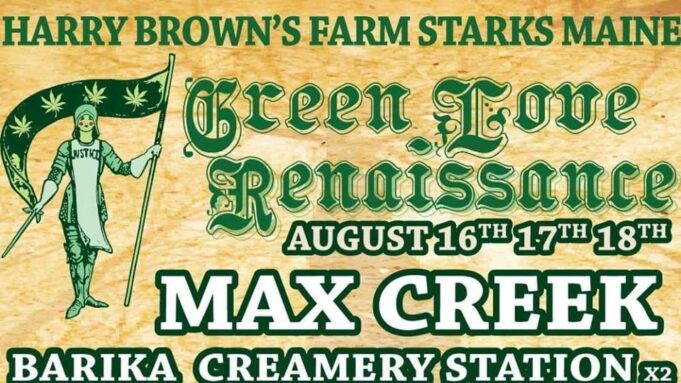 We arrived Friday evening in the early darkness as we had traveled nearly five hours battling New England traffic heading to Maine. We chose our path carefully so as to avoid the usual traffic bottlenecks and heard stories from all of our friends about the mayhem traveling up the I 95 corridor.

We were greeted as old friends at the front gate as the casual crew from Harry’s got us our wristbands and made sure all were safe as we entered. It took us a little while to get situated, found as flat a spot as we could on the property affectionately called Harry’s Hill by attendees, and watched as our friends gathered around us. As we were setting up our digs for the weekend I took out my recorder and captured the last song of the Swimmer set.

Once set up we started to wander around and see our friends who were already there. We wandered over and got a snack at Uncle Mitchy’s Munchies, a favorite stop of ours really no matter what festival we are attending. French Fries and festivals go hand in hand.

Muddy Ruckus took the stage for their first time at Harry’s. Despite being from Maine the roots punk duo had never attended or performed, so it was a bit of a treat for both the artists and the performer. The combination of Delta blues and roots Americana music with the energy that Muddy Ruckus puts out results in a post punk alt folk sound that is truly theirs. Ryan Flaherty on guitar and banjo and vocals, and Erika Stahl on drums and vocals push the band like a locomotive with incredible amounts of force and momentum but also the patience to not have a destination fully embedded in their game plan. Energy just oozes out of the both of them and the audience was absorbing every second of it.

Five songs by Muddy Ruckus, use the arrows to toggle between songs:

That signified the closing of the ‘main stage’ on Friday night but directly adjacent to it is a tented art area that also has a stage that features the later bands and you could even stay were you were on the hill and hear and see it, or wander into the tent and get a more up close experience. This Friday night the late night band was Harry’s Hill favorites Merther. A Maine grown third generation jam band, Merther laid it down for hours. I was already snoozing at around 2 AM, and Merther was still playing. Some time after that emcee Sky Alan did an acoustic set that featured his songs on guitar, voice and looping.

Saturday morning dawned cool and comfortable and we managed the night very well by propping up our cot/air mattress to be as close to level as we could. There was a foggy breeze that was perfect for the morning. On stage David Pontbriand played sitar and was accompanied by the Barefoot Truth Dance Company who added spirit, color, movement and beauty to the soothing sounds of the sitar. This is a perfectly meditative way for the music to begin on the hill and greeted the rising attendees who were able to get their mood and energy straight before settling in for a day of music.

Merther took the stage for their second set of the weekend. In talking to their guitarist he admitted that a late night set followed by a morning set posed challenges for sure, but the band rose to them easily. As stated before, Merther is a jam band from Maine and a favorite of the Harry’s Hill faithful. They are more trancey than say Phish, and belong more in the category of Twiddle or Pigeons in terms of their style. They played for a couple of hours and everyone was very pleased:

Up next: rice – an American Band came for their second annual summer trip to Harry’s Green Love Renaissance. The lineup this year was more than a little bit different than last year. The band began as a four piece with Kyle Heon on drums, Steve Benson on bass (usually Benson plays mandolin and pedal steel for rice) and harmonica and vocals, Brian DiMartino on guitar and Phil Simon on vocals and guitar. Their first hour featured that lineup plus a special guest sit in by Matt Dolliver on saxophone- from Swimmer on the song “Unlimited Vision.” Despite never having heard rice before Dolliver supplied a great melodic accompaniment to the song that was both smooth and exploratory.

Half way through the two hour set rice became a five piece with Maine’s own Christopher Michael Jacques coming in on guitar. An instant chemistry was born between DiMartino and Jacques as at times during the set they complimented each other’s solos, and other times they played in tandem. Jacques’ work has a mathematicians flair and approach to soloing while DiMartino tends to exhibit brute strength and energy on his six string. Together they were a force. The Barefoot Truth Dance company also had a single dancer switch off throughout the show, providing visual splendor and beauty to the performance.

Full audio of the rice set use the arrows to advance between songs:

Dolliver came back and rice swelled to a six piece band for the funky original “Free Karma” which had DiMartino on relentless wah wah and Dolliver wailling away. The band got more energetic and heavy as the set wore on including the psychedelic metal song “Slack Jawed” which unfurled while the kids parade was traveling in front of the stage. Jacques strutted his stuff especially well, dipping into Sabbath and metal riffs during his solo sections. The set ended with Grand Funk Railroad’s “We’re an American Band” in a fitting fashion.

After rice’s set, Harry Brown took the stage for the 420 Invocation speech. Harry himself is a living historian, whose presence is a living chronicle of the counter culture lifestyle, and the marijuana reformation and criminality resistance movement. This year his speech was a combination of historical record and stream of consciousness thoughts that were greeted by an ovation by his gathered flock. No cult leader head, merely a man who tries to lead people by example, he has created a welcoming atmosphere on this Hill for nearly three decades bringing folks together and today was no different.

What came next was something that was distinctly a Harrys Hill tradition and something that would not likely happen at any other event. There was an extended demonstration of medieval martial arts by The Brotherhood of the Arrow and Sword which included knight battles, full costumes and weaponry. This video is not from Harrys but will give you an indication of what they do, which was very entertaining and educational:

Around dusk Green Love Renaissance annual headliners Max Creek took the stage. The band settled into a set that was over three hours in length straight, no break. They took their time, and stretched material and improvised mightily together as only a band of this stature and maturity can.

Of particular note for me personally was the extended jam coming out of “Blood Red Roses” which lasted seemingly a good five minutes. I asked drummer Bill Carbone about it afterward. Me, “Was that BRR jam an extended reference to another song or its own improvised jam?” Carbone, and I paraphrase “That is a jam exercise that we do, and one of several that is common coming out of Blood Red Roses. It features group improv jamming rather than soloing, with the whole band working together in a soloing format.” Each individual section was punctuated and brought back by Carbones snare drum pounding that signaled the band to come back together to form a new collective jam. It was great to watch and a lesson in what a band can do together.

Pretty much full show audio missing a few seconds here and there) below, use the arrows to toggle between songs:

After Max Creek’s marathon set and a short changeover Vermont’s Barika took the stage and showcased their own bohemian take on world music and Afrobeat. The band has been making an effort to reach out to the more jam oriented crowd as their music is a natural fit. I saw them at Jerry Jam just last month and their music is enjoyable. Hailing from Burlington they feature: Craig Myers (N’goni & Percussion), Rob Compa (Guitar), Caleb Bronz (Drums), Giovanni “Johnny” Rovetto (Bass), Chris Hawthorn (Trumpet, Synth), and Matt Davide (Sax). I’m not sure if that lineup is accurate though as I saw Matt Dolliver of Swimmer in on sax and I noticed a kora player that I don’t see listed there. The band was tight and interesting and a great break from traditional jam music that referenced all types of African and world rhythms and melodies.

It should be noted that Craig Myers from Barika is also in the Mike Gordon band and that he jumped up with Max Creek during their extended drum jam. Also of note it seems as if the Rob Compa listed above in the Barika lineup is also the Rob Compa from Dopapod. All of this combined to make for a very entertaining set by a band that may be new to many of those in attendance but are super polished and constructed. A solid, solid set.

The intensity of the day got to my wife and I, and after a grand round of socializing with many we turned in for the night, perhaps earlier than any single festival I have attended ever! But it was great and after such a long and exciting day our rest was peaceful and earned. While we slumbered Creamery Station took the late night stage.

We were on the road however, and chose to travel a less well beaten path from Starks down through into New Hampshire. Shortly after we left, I said aloud that it would be real nice to find some water- and we did, almost immediately finding a pull off next to a lake that not only was private but also had a rope swing!! WHAT??! talk about manifesting your desires and getting instant satisfaction! My lady and I spent the rest of the day driving south through the woods, had a wonderful friend seafood dinner at the Haven in Epping NH and eventually ended up in Boston to see a friend.

Green Love Renaissance- what can I say? You did it again. An intimate gathering of friends and bands, all in Maine inspiring us to live our lives our way, and to be the people want to be. Until we meet again, be well.