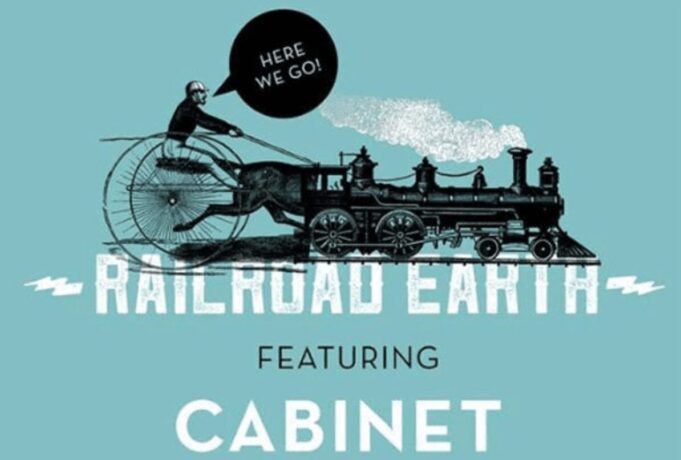 Railroad Earth and Cabinet Team Up for a Summer Concert to Remember at Pat Garrett Amphitheater on August 31st, 2019

Tickets, which are $55 for general admission in advance, $65 at the door, or $100 for VIP passes, are on sale now via Eventbrite. Children ages 12 and under are free and must be accompanied by a parent or legal guardian ticketholder. RSVP to the Facebook event here. Doors open at 3 PM, so make a day of it with the whole family!

Railroad Earth’s music is driven by the remarkable songs of front-man, Todd Sheaffer, and is delivered with seamless arrangements and superb musicianship courtesy of all six band members. As mandolin/bouzouki player John Skehan points out, “Our M. O. has always been that we can improvise all day long, but we only do it in service to the song. There are a lot of songs that, when we play them live, we adhere to the arrangement from the record. And other songs, in the nature and the spirit of the song, everyone knows we can kind of take flight on them.” Sheaffer continues: “The songs are our focus, our focal point; it all starts right there. Anything else just comments on the songs and gives them color. Some songs are more open than others. They ‘want’ to be approached that way – where we can explore and trade musical ideas and open them up to different territories. But sometimes it is what the song is about.”

So: they can jam with the best of them and they have some bluegrass influences, but they use drums and amplifiers (somewhat taboo in the bluegrass world). What kind of music is it then? Mandolin/vocalist John Skehan offers this semi-descriptive term: “I always describe it as a string band, but an amplified string band with drums.” Tim Carbone takes a swing: “We’re a Country & Eastern band! ” Todd Sheaffer offers “A souped-up string band? I don’t know. I’m not good at this.” Or, as a great drummer/singer/mandolin player with an appreciation for Americana once said: “Rock & roll!”

ABOUT CABINET
Cabinet is a band with roots firmly planted in the Appalachian tradition. They wear their influences like badges, honoring the canon of roots, bluegrass, country, and folk, weaving these sounds into a patchwork Americana quilt. But this music isn’t romanticizing or rehashing the past. Cabinet makes it mark on today. The steady aim of their harmonies soar straight onto target each time, the soaring vocals giving voice to the story of each song. Their music takes the long way home, treating its listeners like passengers on a ride through scenic back roads. Their live shows are inclusive, celebratory, and community-building. Everyone will want to get on the wagon with Cabinet. Members Pappy Biondo (banjo, vocals), J.P. Biondo (mandolin, vocals), Mickey Coviello (acoustic guitar, vocals), Dylan Skursky (electric bass, double bass), Todd Kopec (fiddle, vocals), and Jami Novak (drums, percussion), all live and love music, and their polished sound belies their young age. Since announcing an indefinite hiatus in December 2017, the band has played a handful of times in the PA area, making this show one not to be missed!