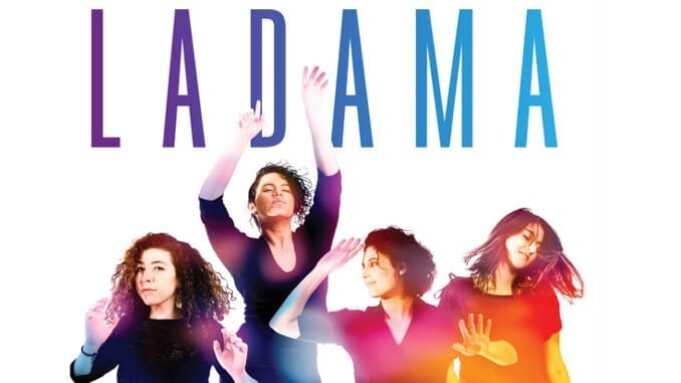 This is a multi part series of reviews that Jimm O’D submitted surrounding the Green River Festival in Greenfield MA.

This is the review of Parsonsfield.

World rhythms, traditional instruments, and four angels playing and singing beautifully, along with an accompanist or two (like tonight’s bass player, for instance), all come together with a decided and distinctive Latin tinge -specifically, South American- in the four-way assemblage of women who perform together as Ladama. True “roots” music, indigenous to the singers’ home turfs of Brazil, Columbia, Venezuela, and the good ol’ USA- comes with a whole lotta spice and plenty of soul- each coming to the fore in varying dynamic degrees as is right for the musical matter at hand.

My good fortune came in a totally random manner this first night at Green River Festival, happenstantially bringing me before the smallest stage (of five, that is) right when it was THE place to be. F’real y’all, I caught the buzz all around the campus: Ladama’s surprise second set, this time at the Green House side-stage, was the Happening event of the night, as a hundred or two audients emphatically concurred during and after, with another some-odd dozen overhearing bystanders approaching the appreciative assembly with inquiries to the effect of, “Who? When? Where? WHO? Wow!”

Word was that Ladama’s performance on the Dean’s Beans Stage early in the evening was so engaging and exciting that pretty much everyone there headed straight for their next stop after it was announced. If an award were given for Newcomer of the Night, Ladama would have walked away with it- easily and hands-down.

I was out for a bit of a walk-about after having my socks nicely rocked off by Parsonsfield and while Lucinda Williams’ band were getting set up. I was really just scoping out the vendors in the Food Truck Lane… when, what to my wandering attention did befall, but some energetic and substantial Funk of the Real variety. At first I thought I was hearing the sound of our local Rebirth Band (who really oughtta be part of this excellent event), but some of the whiff I was catching was more toward the Spanish-ish side of the Afro-authentico World Music spectrum. And quite catchy, of course.

“Real’ funk?” one might wonder…. “whatever, pray tell, might be meant by that bit of hyperbole?” Easy answer: authenticity.

‘Authenticity’ is a particular descriptor for a personal attribute, or a cluster of charactetistics: honesty and sincerity to the extent of vulnerability, and genuine outward expression of internal truths and values- not just the music itself, but beyond the audio and the aural affect of it all: the Artist bears the soul. Sharing is the highest kind of creative output. [Look for TED Talks by both the band at hand in this discussion and health professional/ writer Brene Brown for more on the matter. And thanks for thinking.]

SO… for a moment, I thought I heard Western Mass’ Rebirth Band. Sufficient differences in the music caught my notice soonly enough, even as the commonalities included the overall type and feel (as in, ‘genre’) recently identified by one humble scribe as ‘Real Funk.’ What really does it, though; what sets these music’s apart and makes them something more, is the multiple ways their authenticity shows through. It’s on their faces, it’s in their body language, it manifests in their energy… any performer has gotta go after the affect, and many own enough of it to share some; but for those who really get it, well… they do.

It’s a spiritual thing. It’s in the essence of the individual. The artist might mention it; it may well show up in the songs they play. It is uplifting. The soul is edified when the spirit is healthy in essence. . Gratitude bubbles up and bursts forth in the form of joy, and this energy is outwardly apparent and quickly contagious, even as it is all too unusual in the world. All of which might sound like some kinda hippie-dippie mumbo-jumbo horse-hooey, and there are always those to whom it will always seem to be so, BUT… to see and believe, go. Go and see. See for yourself.

Show up for a show by such naturally dynamic, natively spiritual, and clearly sincere musical performers as the lovely Ladama, or the local Rebirth Band (check out Jimm’s review of Rebirth here), and the light will shine. And if your luck is as good as mine, lightning might even strike again… the next night.

This is a multi part series of reviews that Jimm O’D submitted surrounding the Green River Festival in Greenfield MA.

This is the review of Parsonsfield.