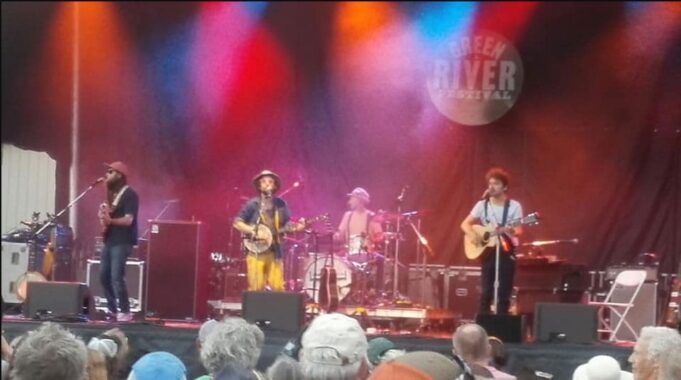 This is the second of a multi part series on the Green River festival. Check out Jimm’s contemplative missive on the festival in general, here.

Parsonsfield is a musical force. Every song they play makes me wish I’d fired up the movie-mobile and pushed the red button… again. They blend a versatile array of elements, played on various instruments, all swapped around the stage with no lack of virtuosity for all the variety. Parsonsfield bends genres and defies category to the extent that their resultant sound becomes something more specific to them, something more than just great music.

Acoustic-based at times and utilizing electric instruments at other times, provided the audience with plenty of energy. The band covers a wide swath of all the elements of Americana (and more). Parsonsfield carries the musicianship and jazziness of a jam band and, by way of a similar sense of experimentation, fuses it with structured songwriting and skillful arrangements. This is progressive bluegrass of the most modern melding.

It would be a difficult (but fun) task to track exactly who plays what and when they play it, or how often which, and where they stash all them stringed things. The why is obvious: because they can- and well, to mighty fine effect. The varying combinations of acoustic and electric guitar, banjo, mandolin, keyboards – and the bass, too; the bassist swapped it out in order to park himself at the piano – are all pretty impressive and plenty pretty.

The result of all these on-stage dynamics is a whole lotta fun for all. Everybody enjoys this fusion-grass including the band, obviously, and the however-many thousands here at Green River Festival.  The music is almost surprisingly smooth, like Nashville pickin’ by L.A. super-session players, and the sonic output is exquisitely balanced, clean and clear… good an’ loud, but no more than perfectly so.

Each song Parsonsfield plays begs recording and sharing with the world. Each of their compositions seems like just the right vehicle to showcase the highly effective integration of elements and instruments, and the high-flying harmonies are quite striking. I was really happy for the stroke of good fortune that graced  my trigger finger as I pressed ‘record’ each of three separate times tonight; and for this one, in the case of Parsonsfield, the same would have been equally true however many times I might have thought, “THIS one … this is the ONE!”

The whole show, from the music to the loose-casual (as in fun) on-stage dynamic and the exquisitely polished sum total, makes it easy to figure that they are from some major music metropolis instead of Leverett, MA, which I may have considered to be the last on the list of places such players are plucked from typically.

But, imagine my surprise and delight when I come to find out Parsonsfield actually IS a local band. I remember being favorably and thoroughly impressed with them before – at last year’s Green River Festival. I assumed this to be a national touring act back then and they are even more polished now.

Truth be told, these guys have recorded in multiple places around New England, and they have a theatrical soundtrack, an original film score, and even a TV track to their credit. There’s only one surprising thing about discovering how far along the road Parsonsfield has already come in just a few years: my own ignorance. I’m going to rectify that now that I know what I’ve been missing!

This is the second of a multi part series on the Green River festival. Check out Jimm’s contemplative missive on the festival in general, here.