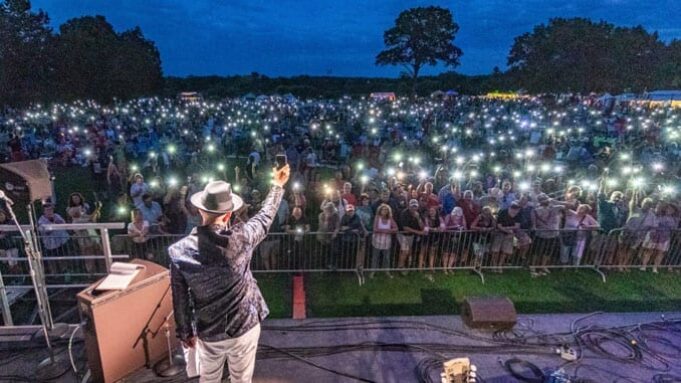 This is the first in a several part series on the Green River festival. Here, Jimm gives his thoughts on the history and his personal attachment to the Green River Festival at Greenfield Community College. In the following pieces Jimm will review some of the bands he saw at this year’s festival.

One might suppose that the Green River Festival is featuring more international artists of the “Ultimate Roots” variety as years go by, increasing the proportion of jazz, funk, African, and Latin music while simultaneously staying true to its Americana ‘roots.’ Such stuff still abounds, of course, with plenty of folk, country, blues, and bluegrass – as well as the many adventurous offshoots always in the offering – and there are a good many national, regional, and local bands moving forward in the furtherance of these multi-genre meldings. But it occurs to me that most of what we call ‘world music’ is every bit as authentically a kind of roots form; it’s just whatcha call indigenous to some other nation, location, or ethnic “genre-fication” than our own. Generically then, or by definition, there’s a whole lot wider variety available (and advisable) than just American stuff, with no need to argue (or pick nits) over nomenclature.

In the eyes of this humble scribe, the post-Graceland gospel according to Peter and Paul (Gabriel and Simon, that is), handed down from tradition via Saint Johnny (Clegg, I mean) continues to pick up the steam it started gathering in the post-punk mid-Eighties after a period of gestation in the New Wave through the middle and later Seventies- having germinated in the early 70’s, actually. If one remembers the infusion of Soul (via Disco/Dance music) into the quasi-old-school Rockabilly being raged by the Punks in those days, then that one will probably have some affection for the likes of Talking Heads, maybe even Blondie. All to the end that such a one would have been properly primed and ready when the great big ball of diversity soon to be known as World Music dropped onto the airwaves of increasingly commercial radio stations and into the grooves of both large and small discs, the analog vinyl record and the then-new, error-correcting compact discs. The year was 1986.

So began the opening of the doors of diversity that will naturally accompany (or identify) the lasting effect of probably any social integration, musically speaking in this case. Such diversity and its rightful coming-to-place in the mainstream is downright exciting- just look at the energy this art brings, and not without the discipline of technical sophistication. This is Rocking in the Real World, high on the feelings with no shortage of intellect, and all in good balance.

With artistic types  (musicians or others) tending to be at the fore of these open-minded, creative, “new” waves in society’s development, it makes sense that those in sympatico with such artistry will think and operate in accordance with their internal ethics. Like the college-radio DJ who introduces us to new music so that the big guys can pick up on it, pick it up, and get it going in the marketplace  (well, that’s how it used to work), this kind of alt-ish open-ness keeps the whole progression going in its forward motion.

Enter Green River Festival: traditional AND progressive, the minds who master this respect-full affair are the kind to go beyond just comprehending and cooperating with the greater artistic trends. These are the folks who go out and seek it. They find they like something, they discern its substance- or its value as contributor to art overall, and they actively find more… and if they’re in a position to share it with the rest of us, so much the better.

I have been volunteering at Green River Festival for a few years now. They keep me just busy enough to be distracted from my primary calling, but we all have ourselves a mighty fine weekend. I usually snap a few pics a few different times, dash off a sentence or so of commentary here and there, and come away feeling strangely (and unnecessarily) guilty for not have dwelt with any more depth upon some number of artists and acts. Life goes on, time rolls along, and I pensively chew on a kernal of intention that Next Time Will Be Different. Ruminate on, music lover!

I got some jotting done this time, touchscreen-tapping muchly through the days and finishing none of it. Most times, this stalling becomes an end and I come away feeling strangely (and unnecessarily) guilty as my deficit of attention is snapped away by the next fly to flit across my line of vision.

“Not this time,” I vowed, not for the first time as I chewed on this year’s kernel of intention. It took a couple of weeks of waiting for the right time and sleeping through the many that weren’t… but here we are.