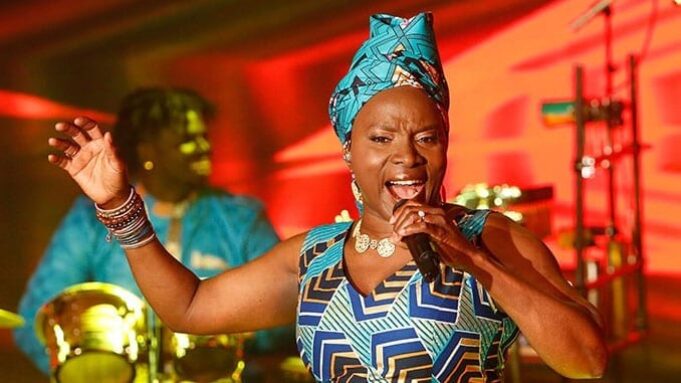 This is part of a series written by Jimm O’D on shows seen at or in association with the Green River Festival in Greenfield MA in July. Check out his general missive about the event here and then his review of the band Parsonsfield here.

Speaking of World Music, or the ultimate Roots and its ever-inspiring integration into the mainstream, Saturday night’s headliner was well worth waiting for, even after enduring the heat of the long afternoon. In fact, the cool of the night may have been a factor in the awesome release of all that energy from the thousands on the GCC campus, with least as much of that energy emanating from the main stage itself and the enrapturing, soulful singing and really quite commanding presence of Angelina Kidjo and her superb band.

The finale to the Big Finale was so impressive it bears fast-forwarding. The sincerely soulful star invited (nay, demanded) a few dozen from the crowd come up on stage with her and the band, to step out and dance a turn or two, each in turn. One hoop dancer in particular had to have been the favorite, her joy and release vibrantly visible to all. Not since Peter Gabriel’s bold and brave “Laying On of Hands” (when he would come to the edge of the stage, crouch down, and lean back to let himself be supported by the hands of waiting fans and passed along the rows to about half-way up the auditorium) have there been many such displays of trust and human contact from an artist of international stature.

This theme of Community often- perhaps usually- runs through the songs of these international roots artists. As primal an instinct as World beat is fundamental to music, this basic human need and trait calls up a response to the greater love that goes above mainstream pop charts. Nary a “yeah baby” is heard in these shows, unless it spontaneously spouts from the soul of a singer like a “hallelujah” in an old-time Gospel get-together.

Just last year, Angelique Kidjo released “Remain In Light,” aptly described in Wikipedia as “a track-by-track re-imagination of the original, considered to be one of the greatest albums of the ’80s and deeply influenced by music from West Africa, notably Fela Kuti’s Afrobeat. With her version of Remain In Light, Angélique celebrates the genius of Talking Heads, Brian Eno and the touchstones that made the original so revered and injects it with her euphoric singing, explosive percussion, horn orchestrations, and select lyrics performed in languages from her home country.” Serously, I couldn’t say it better.

The 2018 release and the live experience, having been premiered a year earlier with a sold-out Carnegie Hall show, was favored over others including a new one; even the current billing carries the album’s title as its tag. This is Big Stuff. Many, maybe most at Green River seemed to be aware of the phenomenon, which detracted not one bit from the electrically and naturally-juiced performance on the main stage. This was the Event all had been waiting for. The crowd thickened till the field was full, the lateness of the hour (for some, at least) notwithstanding- unlike those nights when the last act gives as good a time as any to head for the car and the out-gate. Such times are not so frequent, of course.

The sound, seemingly infused with ancient energy crystals, was crystal-clear and most massive, with a similarly awesome light display to heighten the whole electrified atmosphere. Not every sampling of music, no matter how beloved or fan-favored or bit-champingly-anticipated, will give rise to chills up the spine. It did for this one, for this scribe, at least.

With an embarrassing absence of foreknowledge but a fairly open mind, and a critical and appreciative ear, the effect of Angelique Kidjo’s performance was about as close to “mind-blowing” as has been witnessed in quite some time.

This is part of a series written by Jimm O’D on shows seen at or in association with the Green River Festival in Greenfield MA in July.

Check out his review of the band Parsonsfield here.