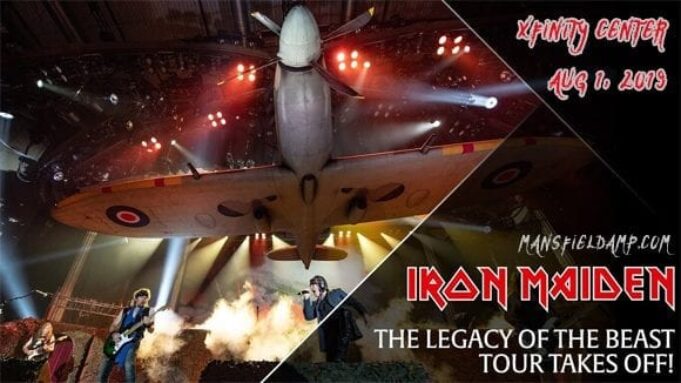 Since its inception four decades ago, Iron Maiden has been a band that fully understands the power and effect of identity. The group’s blending of progressive rock and heavy metal, laced with lyrical content that winks at the genre’s darker side but, more accurately, reflects a deep appreciation of world history, has long been a hallmark of the sextet’s music. Just as importantly, though, Maiden’s eye towards iconography, symbolism, and theatrical stage design have created a culture that makes a sold-out performance at the Xfinity Center in Mansfield, MA in early August as much a concert, and one-of-a-kind spectacle, as it is a gathering of the thousands and thousands of members of this fiercely loyal club.

Every headlining tour the band has undertaken in nearly 40 years has only raised the bar for the next. 2019’s U.S. leg of the Legacy of the Beast is perhaps the most ambitious visually as anything the group has staged previously. Though nearly impossible to do in the social media age, this is a show best experienced without any prior knowledge of what’s to come. So, for the sake of preserving the element of surprise, the details will be referred to here only in general terms. Needless to say, there is fire, and fireworks, and an appearance by a very familiar undead mascot, but beyond that, it’s better just to
enjoy, as it unfolds, what singer Bruce Dickinson referred to as “the circus.”

Even with Maiden’s ongoing releasing of their catalog of studio albums on digi-pack over the past year, (a terrific way to indoctrinate a fan or revisit their marvelous run of records), this tour is essentially promoting the band’s foray into the video game universe. Accordingly, the set is loaded with classics, opening on this hot night in the woods of Southern Massachusetts with a soaring “Aces High,” and then maintaining its altitude on “Where Eagles Dare” and “Two Minutes to Midnight.” The ensemble of six is as energetic and thundering (and loud) as ever; Dickinson hitting the operatic peaks of the vocal with
enduring and impressive control and impact even while morphing through multiple wardrobe changes.

Propelled by founder Steve Harris, mouthing along with every lyric as his galloping bass leads the charge, Maiden moved from the sing-along chorus, 17,000 strong on this evening, of “The Clansmen” to the always-stellar “The Trooper,” and a walk-on cameo by the aforementioned skeletal “seventh member of the band.” The triple-attack of guitars remains stunningly potent and blistering, as if Dave Murray, Adrian Smith, and Janick Gers, even as they age, understand the expectations of an audience hungry for hyper-fast and articulate fretboard flourishes. And they deliver, sounding as much like twenty-something axe gods as they do veteran masters. The elder statesman of the lot, and as integral as any to the lasting thrust of Maiden, is drummer Nicko McBrain, still an absolute machine behind the kit, keeping tempos up the irons, and holding firm the foundation of extended pieces like “Revelations” and “For the Greater Good of God.”

The two-hour performance’s second-half touched on well-executed newer entries like “The Wicker Man” and “Sign of the Cross,” yet it was “Flight of Icarus” that ignited a string of classics in a furious build to the finish. Dickinson was everywhere, stalking the stage from platforms above or front and center; Murray and Smith trading screaming licks; Harris digging in, locking with the feverish throng; Gers, in gymnastic splits against monitors or whipping his guitar with its cable; McBrain, precise and pummeling behind it all. By the time they reached the final and explosive “Run to the Hills,” Iron Maiden had proven once again why they remain, both musically and as performers, among the elite live bands in the world.

There is a knowing sense of theatrics and production within the group’s dynamic that also makes each song, each appearance so much fun, to use a word perhaps not as often associated with the band, and one that draws a crowd ranging from five-year-olds on dads’ shoulders to greying metalheads. Theirs is an audience that wears proudly the uniform- black Maiden concert or album T-shirt- and sings along with every word, and they are rewarded with a band that cares to make every show not just a show, but The Show. It’s hard to imagine how Maiden can continue at this level of stamina and output into a fifth decade, but Dickinson did hint at new music coming soon and an inevitable return to the road. In the meantime, Iron Maiden is crossing the U.S., leaving amphitheaters and stadiums, as usual, amazed.