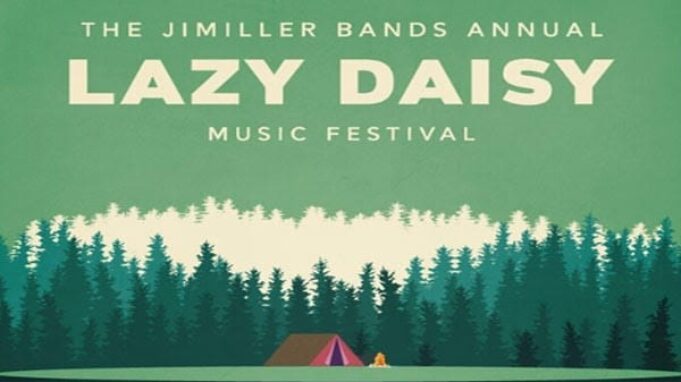 Lazy Daisy is always one of the best weekends of the year and is not to be missed! Nelson Ledges Quarry Park offers some of the best camping in Ohio and one of the nicest quarries for swimming. There will be plenty of room to camp, so come out and enjoy an amazing weekend with great music, hiking, biking, swimming, cliff diving, sand volleyball, Disco Pizza, every type of food vending, and more!

Buy your festival tickets at this link (camping is included with price of admission) and RSVP to the Facebook event here.

The JiMiller Band is a five member band out of Cleveland, Ohio. The band is led by Jim Miller’s resonating vocals and jazz-infused lead guitar, Dave Blackerby plays the bass, Steve “Nev” Scheff on keyboards and Brian “Bagel” Golenberg on drums, with the newest member Vince Berry on guitar.

The JiMiller Band’s style is as varied as their influences; JiMiller blends together blues, country, Cajun, rock ‘n’ roll, jazz and bluegrass into a musical Americana that is both fresh and timeless in their everlasting sets. However, the band is best known for its free-form improvisation rock that was made famous by The Grateful Dead and the Allman Brothers.

The scenic Nelson Ledges Quarry Park is a great place to camp, swim, hike, sunbathe, attend music festivals, or just plain hang out. The park is a beautiful landscape made up of 250 acres of forest, meadows, streams, rock ledges, fishing lakes, and of course the quarry itself. There are also more than 400 campsites, some deep in the woods, some along the Quarry, and others in secluded meadows. Nelson Ledges is an ideal venue for weekend-long music festivals and is rolling through its 2019 season with gusto.