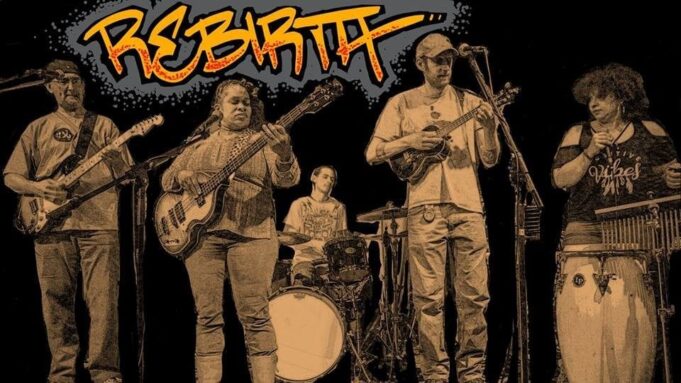 Rebirth band should play more. Not longer, necessarily – well ok, that too – but more often, I mean- lots!  I had them on my mind all weekend at the Green River Festival. The three bands I mostly focused on (one at a time, I mean) each called Rebirth to mind. Simply by way of creativity, this seems easy enough for me to wrap my brain around. But the first of those three, a decidedly folksy Americana group of “jamgrass” players, really don’t have so much in common. It’s the artistry, the clean, articulate sounds of each the instruments and the vocals, and the spirit. These are sincere and authentic humans being; and that, to me, is the spiritual component.

Every time Rebirth Band plays another song, I want to grab my device, switch the camera to ‘record,’ and push the round, red button. The energy is stimulating for sure – anyone here would easily agree, I can see. But the exquisite musicianship raises it up a notch. Or two. At a time, and so on.

Each time one of the players shines a wee tad more sparkly for a moment, it begs to be captured – it needs to be shared. Same with the total package, the overall atmosphere and effect of each composition; but one thing will always grab a small-town boy and aging rocker (and humble scribe): guitar! Not to lay claim to any great measure of metal-headedness, but I really loves me some lead.

The less mature and sophisticated version on me might not have been satisfied – these ain’t no guitar-hero antics. This is artistry, understated often as not, and it is an expression of community. Every individual intricacy exists in service to the music; each individual player contributes to the gestalt as a cooperative and equitable entity. So the string-slingers -one, six and the other, four (uke-axes and a tenor guitar) are not here for purposes of self-aggrandizement.

There might be a freedom in not always blaring. Like leaving room; real musicians know that not every space has to be filled. This different degree of demand may well allow some ease in the activity – there’s a whole lotta lovely sounds can come out of a guitar (or a ukey-thang) besides straight-up, searing leads. Atmospheric sounds, backdrops and washes, sweet, Django-esque fills and laid-back leads like a lounge-act (the jazzy kind); all manner of otherwise experimental techniques can ease their way into the mix. A slide will sometimes appear, as it does here for innovative applications and adventurous, integral but understated, creative contributions to the composition of the moment.

A certain humble scribe has waxed wordiferous about Rebirth Band a number of times before now. The “big names” (some surprising) that have been referenced by that scribe (whether or not consciously by the composers) will include all manner of innovators such as Peter and Paul (Gabriel and Simon), Talking Heads, Bruce Cockburn, Juluka and Savuka… following from the daring but disciplined openings brought along with the New Wave and combining with the infusion of dance rhythms until mainstream music was ready to take in the indigenous forms soon to be called “World Music,” the increasingly popular (tho not ‘pop’ per se) sonic consequences of all that inter-reacting activity are becoming sufficiently ubiquitous that more and more variety is inevitable. The field is widening. There is plenty of room for who-knows-how-many different musical entities for each to establish an identity.

The point of this verbal trip ’round Robin Hood’s barn is simply that Rebirth Band has a place in the world. Their space thus far is only so expansive, but their musical reach should carry them far beyond the local. They need to play out more. I tell ya what, though… no matter how much Rebirth Band performs, there will never be enough – not for this humble scribe, anyway.

At a local one-day carny/fest a couple of weeks ago, as soon as I realized Rebirth had made an album a couple years back, I ran back-stage to score one. Didn’t even flinch at the prospect of handing over a tenner- except I didn’t have one. Irene took nine; I thanked and skee-daddled. I then slipped it into my car player, and there it stayed, playing away til the next time my car quit on me- maybe like a week. It’s a great listen!