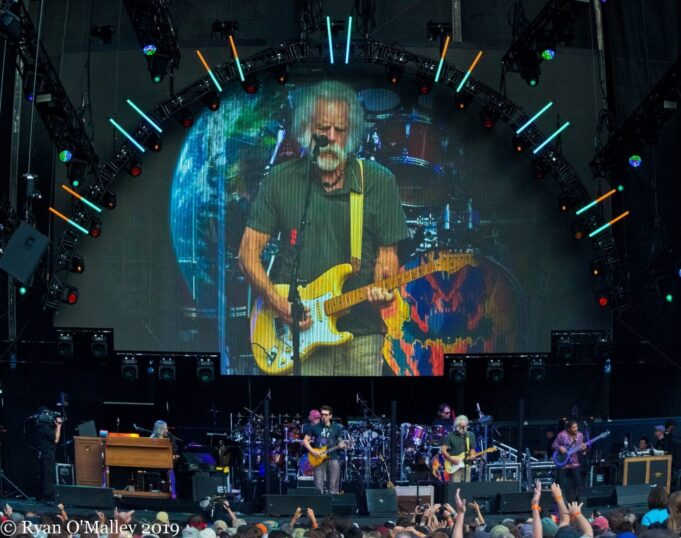 Since forming in 2015, Dead and Company has become a staple of the summer concert season and has performed to throngs of adoring Deadheads who fill the seats at everything from arenas to baseball parks and even stadiums. Along the way, the outfit has become known to deliver surprises when people least expect it. Such was the case this past Saturday at Gillette Stadium in Foxboro, Massachusetts.

With the venue being the biggest of the tour, expectations were high for a real good time, and for anyone following the bands set lists, it seemed as there was a chance for a mammoth show with many crowd favorites due up in the rotation. Taking the stage almost exactly at 7:30, the band chose to launch into the Dead favorite “Eyes of the World” – typically a second set staple – which served as an appropriate way to get the fans dancing. The number was highlighted by some fine keyboard work from Jeff Chimenti who has become beloved by Deadheads for how he interprets the music in his own way which gives the songs a new life. As has become customary when Dead and Company play the number, bassist Oteil Burbridge delivered a flawless solo towards the songs end.

Perhaps as an homage to the late 80’s version of his band mate Bob Weir, lead guitarist John Mayer – wearing an 80’s Madonna t shirt – kicked off a lively version of “Deal,” which found the guitarist shredding in both the middle and ending jams. Since forming the band, Mayer has become increasingly comfortable in his playing and is capable of adding just the right amount of his own sound into the music. Weir took the helm for a slower run through one of his staples, “Black-Throated Wind” before the bluesy “Easy Wind” solicited rousing applause from the audience. In keeping with the slower pace (which is becoming increasingly common in the bands shows as of late), Weir lead the outfit through a prolonged “Loser” which seemed to put an almost too mellow vibe to the last half of the opening set.

In a comedic part of the show, Mayer started to play the opening riff to the thumping “Big Boss Man,” but was stopped by Weir for mistakenly playing the wrong ”big” song, as “Big Railroad Blues” was to follow. It wasn’t the only mishap to come during the first set, with Mayer flubbing the verse to the Phil Lesh nugget, “Box of Rain.” The cut hadn’t been played in three years, and after a rare restart of the song, Weir joked “take two.”

Going into the second set, there was potential for a monster set as songs like “Scarlet Begonias,” “Fire on the Mountain,” “St. Stephen,” “Terrapin,” and “Jack Straw” were all possibilities. When the band has played bigger venues over the last few years (Fenway Park, Citi Field, Wrigley Field), it seemed the shows were always highlights whether it be for the inclusion of Donna Jean Godchaux or the unearthing of a never played before song.

A lively trio of “Help on the Way>Slipknot>Franklin’s Tower” opened set two, which made it possible that we were in for an upbeat second half. The following segue – although songs that are loved by many – went the opposite route, beginning with a standard run through “He’s Gone.” Again, the song is adorned by Deadheads and is a fun sing along, but the momentum could be a bit of a downer for people ready to dance. Coming out of the ending jam with the familiar opening to the psychedelic opus “Dark Star,” the speed of the show failed to pick up.

With Weir doing the second verse of “Dark Star,” it became clear that the inevitable “Drums>Space” segment of the evening was to follow. Although their portion of the show is shorter than years past, drummers Bill Kreutzmann and Mickey Hart have undeniable chemistry together, and their love of world music and percussion always provides a show highlight. Coming out of a slow jam in “Space,” Weir lead his band mates through a tender but drawn out take on the Jerry Garcia favorite, “Stella Blue.”

Finally, the speed picked up with the crowd-heavy “Not Fade Away,” a song that is always fun to hear live; but took a little to get to full speed, possibly due to the slow momentum of the preceding numbers. Much like the Grateful Dead would do in many of their shows, Dead and Company sandwiched the uppity “Goin’ Down the Road Feelin’ Bad” featuring a lead verse by Burbridge into the middle of “Not Fade Away” which was met with a roar of approval from the crowd. With the show falling on a Saturday, it was almost understood that we would be treated to a “One More Saturday Night” encore which would send the crowd home in high spirits. With the show already full of unexpected numbers, the band once again surprised the crowd by playing their version of The Band’s “The Weight.” The song is fun to hear in concert – including Burbridge and Chimenti handling lead vocals on some verses – but, yet again, it fit the night’s mold of slower paced songs.

Saturday’s show was fun nonetheless, and the band sounds better than it has in weeks. If one thing was evident in Foxboro, it’s that Dead and Company is a band that does what it wants, when it wants. If you’re going into any show expecting to hear certain songs, you run the chance of being confused as to why the band is playing what they want. And if there’s one thing the Dead ever taught us about confusion, it’s best to just listen to the music play.

Help on the Way into Slip into Franklin’s Tower

Not Fade Away (The Crickets cover) (>)

Encore: The Weight (The Band cover)