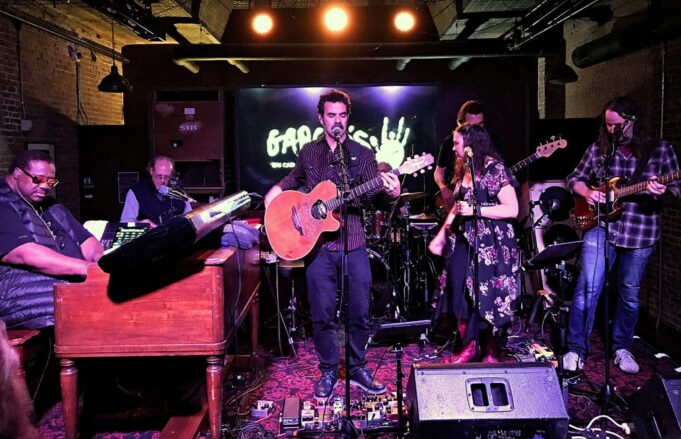 The musical supergroup known as The Rock Collection, whose members all hail from the San Francisco music scene, made their east coast debut this past weekend with a run through in Port Chester, NYC, and Ardmore, PA. Friday night saw this run kick off with the Port Chester show at Garcia’s at The Capitol Theatre.

The Rock Collection is indeed a supergroup consisting of a handful of prominent San Fran music artists: Melvin Seals anchors down the keyboards while his JGB partner in rhythm, JP McLean, handles bass. Phenom drummer, Greg Anton, best known for his work with Steve Kimock and Zero, holds down the drums, and lead guitar duties are shared by the prolific Dan “Lebo” Lebowitz of Animal Liberation Orchestra and Stu Allen, frequent member of Phil Lesh and Friends. Joining them also is Tumbleweed Soul vocalist, Stephanie Salva. While this sounds like a savory gathering of west coast rockers, the Garicia’s show easily showed to it’s packed audience that The Rock Collection is greater than even it’s individual parts.

Immediately on their first song, the band was in great form starting up a psychedelic sounding groove that had a slightly Latin twist to it. Lebo, who seemed through the night to be unofficial ringleader of this jam session, took the first solo of the night on his amped electric, and it was a doozy. With a pristinely darkish tone that recalled his stylings shared with Steve Kimock, Lebo gave beautiful color to the night right away. Guitarist Stu Allen followed right after with his own first solo of the night, and again, was impressive from beat one. Allen’s first rip was a bright one, and turned the end of this first song from mysterious to a feel-good reggae rock thing.

The Rock Collection’s repertoire seems to be a nicely mixed bag, with obscure original pieces penned by the various members trading off with interesting covers. The band’s second jam was on Lebo’s “Try,” one of the best known hits from his band Animal Liberation Orchestra. It was with the ”Try” solo that Seals took his first solo of the evening, big and soulful, just as in his classic style.

Song number three, at only thirty or so minutes into night, towered as a tremendous musical piece, stretching into the deep musical distance with amazing musical interplay between all members. It coalesced on a killer, mesmerizing funk-rock riff that was started by Lebo and then joined by a second keyboardist who proceeded, after this song, to jam with the band for the rest of the night. His name, unfortunately, escapes this review, but he’s one seasoned player. He matched Seals’ keyboard work with his own impressive solos and harmonic, fill-in parts on most of the songs. In this third jam, after he did his thing, Seals followed with a classic Melvin move. Just as he’s always been known to do when playing with JGB, Seals laid heavily onto his Hammond, getting an explosive and blaring sound to come out of his organ. This was a standout moment in the song and the whole show, and that was clear from the cheers throughout Garcia’s.

Also unfortunately, the name of this epic, third tune of the night escapes this review as well—though Lebo did mention it was composed by drummer Greg Anton. Anton is an awesome component to this special supergroup, who balances out the far out playing of Lebo, Seals, and Allen with an intense, hard-hitting drumming style.

The band performed a mystical version of “Three Balls Blues,” which was also composed by Anton, writing beside Dead lyricist, Robert Hunter, for it. On this one, Lebo demonstrated his mastery of the pedal steel. The guitarist wrung every bit of feeling possible from the instrument, while Seals and the other pianist layered in delicate chords around it. All put together with the vocals of Stephanie Salva, this song came as an ethereal point in a truly effervescent evening of music.

Other great performances peppered around these highlights. Seals sang a tune, uttering lead vocals in a growly, talky way, almost reminiscent of Robbie Robertson. The band also did a firm version of “Whipping Post,” an unexpected treat whose ending they made sure to punch hard. But they ended this show, which was most certainly a standout live debut with actually one of their most enjoyable jams of the night, a cover of “Watching The River Flow.” They rocked this Bob Dylan cover out properly from beginning to end, with the entire band sustaining an impressive and satisfying level of power throughout the entire song.

When all in company agreed to doing one more “short one” for the Garcia’s crowd, Lebo joked into the mic, “I don’t know, do we do short?” This quip was not unfound: most of the night saw the group stretching pieces out into very long lengths, without ever losing a bit of interest or attention, we might add. The Rock Collection’s tight musical cohesion is mirrored by their sheer, clear as day enthusiasm for the project. Lebo and Seals could be seen trading big smiles all throughout the night, and when Salva wasn’t feeling the music with eyes closed, she was giving impressed expressions to Allen’s sharp solos.
On Saturday, the band took to a performance at NYC’s Brooklyn Bowl, and on Sunday night, ended their east coast run with a performance at The Ardmore Music Hall in Ardmore, Pennsylvania. So far, only one additional show is scheduled ahead, at Terrapin Crossroads in California on May 17.