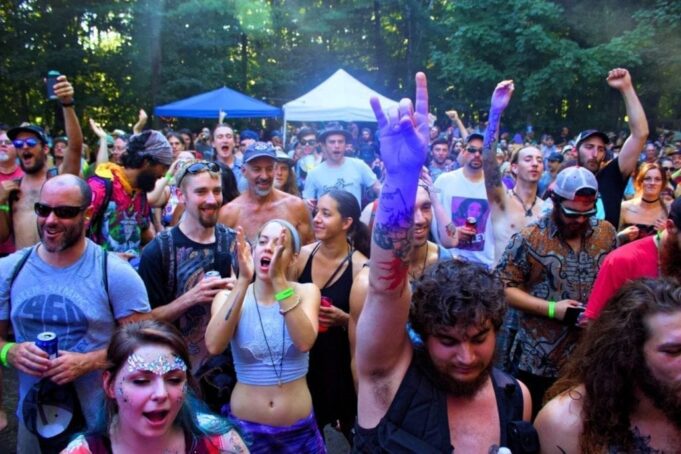 Saturday at Wormtown is a marathon, not a sprint.  With bands hitting the stage mid morning and going until essentially dawn the next morning, it is not for the amateur.

So pack your water, get your rest, fuel up, and get ready for an onslaught of incredible music. August First was the first thing that I saw on the main stage.  The band is a bluegrass ensemble from Worcester, MA, and this was their first Wormtown, though they were at Strangecreek back in the Spring.  They were celebrating 100 shows together at this festival and I can’t think of a better way to do it!

The band is fronted by mandolin/singer, Nicole D’Amico, and their material is a mix of originals and covers ranging from mostly bluegrass standards, the Dead and Jerry Garcia, but also the Talking Heads and even Pink Floyd.  They were a perfect start to the day, and with a new original album coming out for them any minute now, I think we’ll be seeing a lot more from them (they are hitting Old 78 Farm fall festival in Warwick, MA).

Also on Saturday morning were some of the head to head contest winners, including WestConn College based group, Tales of Joy. With a powerful percussion and drum combo and a couple of singers that breathed new life on an old school state of mind, this sparkling six piece (literally sparkling, in sequin suits) did awesome for a day-opening time slot, gathering a great morning crowd that didn’t have a single stationary body. 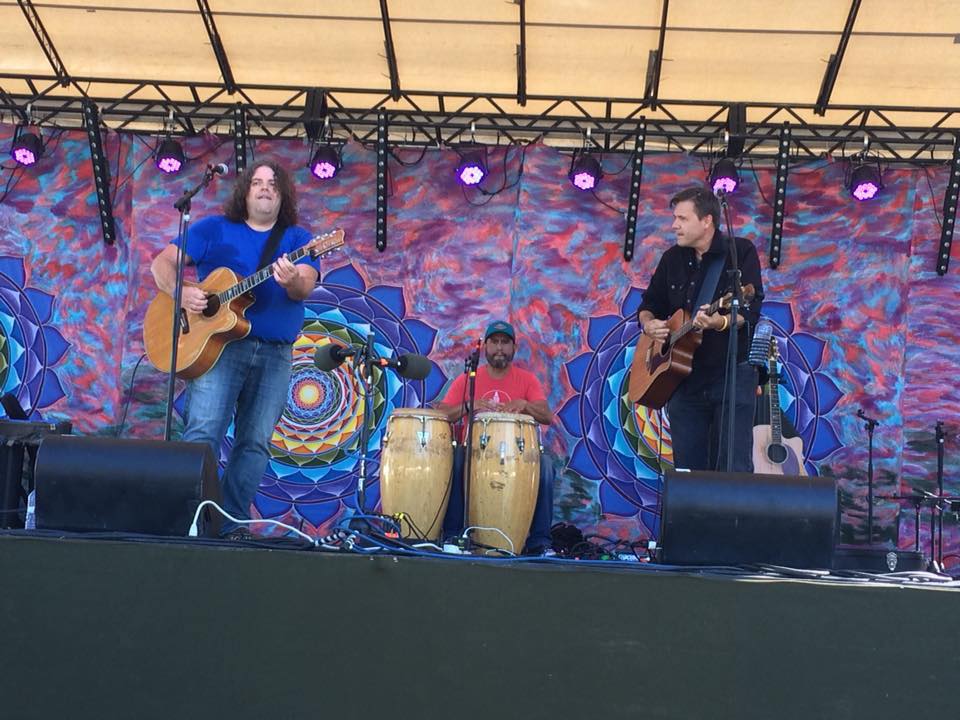 Back on the main stage, The Coalboilers were continuing the acoustic vibe.  Gary Backstrom from Jiggle the Handle and Charley Carrozzo of Another Planet and Way Up South doing their favorite tunes both originals and covers on dual acoustic guitars.  Pink Floyd’s Welcome to the Machine was quite the surprise. Full set audio:

Worm favorites, Woody and the Rebel Alliance, took the stage with a large version of the band, soaking up the rays, and relishing their main stage experience. You could tell that the band was feeling it, and they featured a lot of material off of their forthcoming album release.

The band has a real working class bluesy rock vibe, almost like Bruce Springsteen with a horn section.

Meanwhile, modern jazz/funk legend, Eric Krasno, played a nicely feel good set on the main stage with his solo touring band, which features himself beside the dynamic singer and guitar duo, Mary Corso and Danny Mayer, 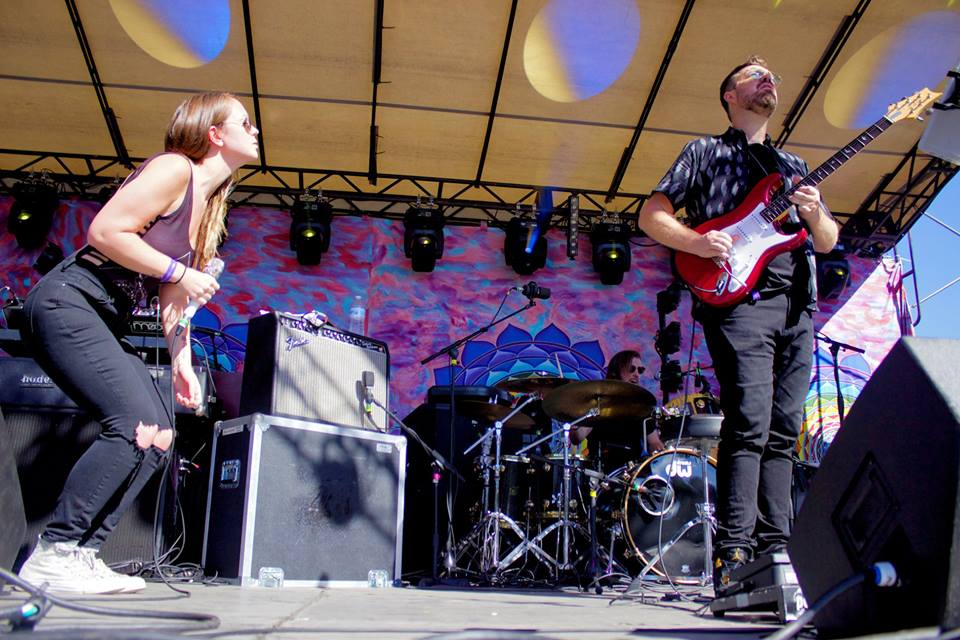 along with a supertight rhythm section. Among selections from Krasno’s solo record, the group played a tenacious version of The Allman Brothers’ “Dreams.”  I also really enjoyed their version of “Second that Emotion,” which was done in a fashion similar to versions by the Dead or the Jerry Garcia Band.

Instrumental powerhouse, Tauk, launched themselves off of Krasno and crew’s great momentum, and packed KeeWanee’s main field with a big audience of savvy prog-jazz fans. It usually doesn’t take this quartet long to dig into the dark heart of their adventurous, sonically charged instrumental jams, and Saturday’s set was no different. 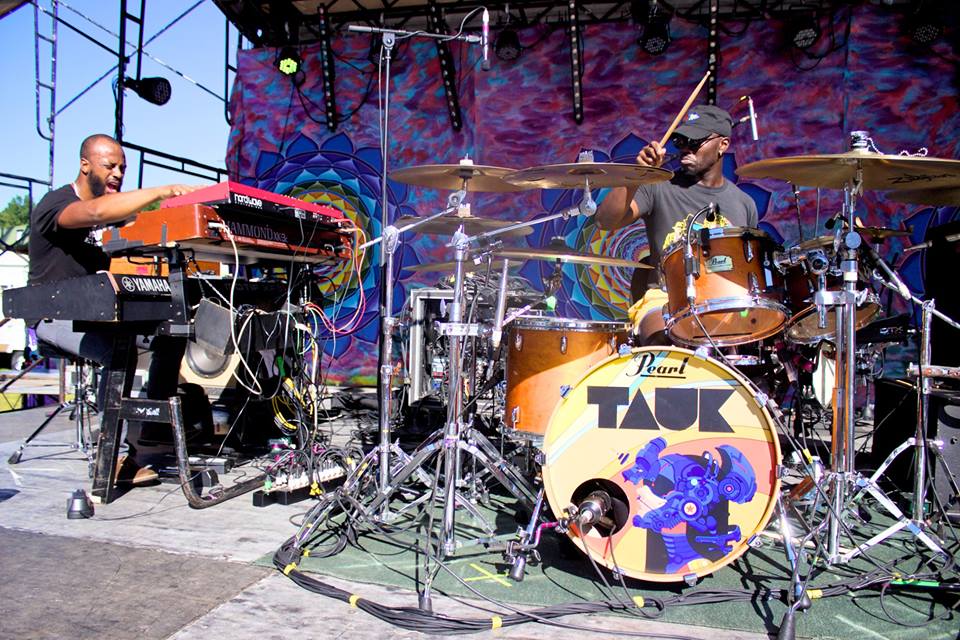 They played some material from their newest album, Shapshifter II: Outbreak, which comes out at the end of this week, and which is as groovy yet as hard hitting as previous material. A great Tauk set reaches a point several times—which mirrors tons of dizzying composition with breakneck, inspired soloing—where the energy transmuted between instrument and audience boils over. After one such musically ebullient moment, drummer, Isaac Teel, stood up and basked in the overflowing joy of the crowd’s excitement.

“Last time I was here, it was raiiiiiiining…” That was sung by Keller Williams soon after, in the opening of his main stage solo set on Saturday. After super fun versions of “She Rolls,” “Best Feeling,” Keller invited his brother in loops, Zach Deputy, up to collaborate on “One More Saturday Night.” 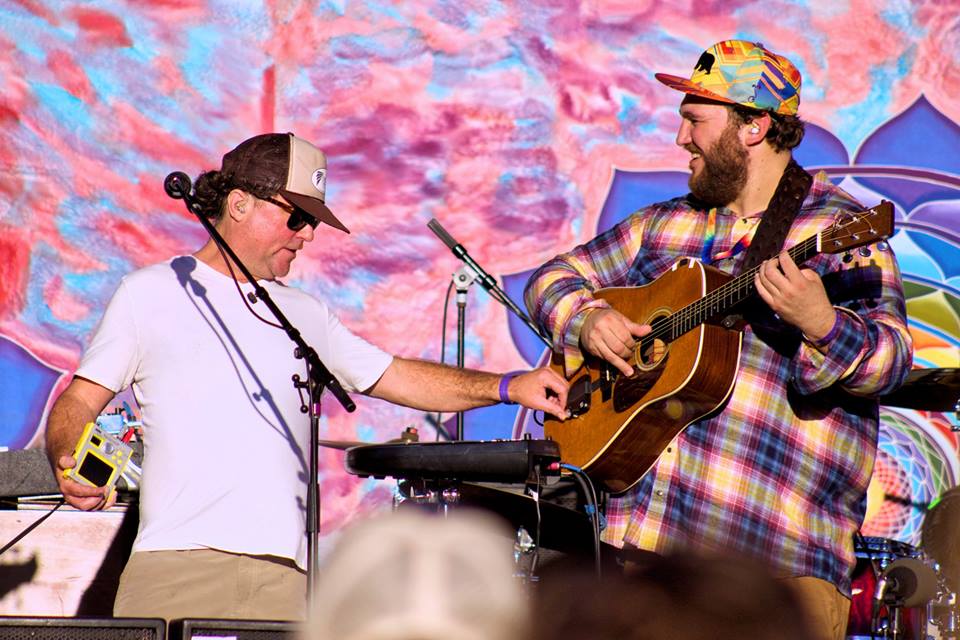 The two made it as silly and unpredictable as you could imagine, while holding onto the kind of groove their both known for. Right after that, Zach Deputy himself featured many guests in his Zach and Friends set, including members of Max Creek, Consider The Source, and some keytar player that shined magnificently every time he ripped a solo. Here Deputy belted out a stellar night time version of “Stand By Me.”

We were able to capture some of the set on audio:

“What’s up Wormtown! This is our seventieth time here!” said John Ferrara of Consider The Source, indeed one of Camp KeeWanee’s most time honored performers. There was no doubt that this staple prog-funk trio was going to have a more than respectable crowd for their set at the twentieth anniversary. 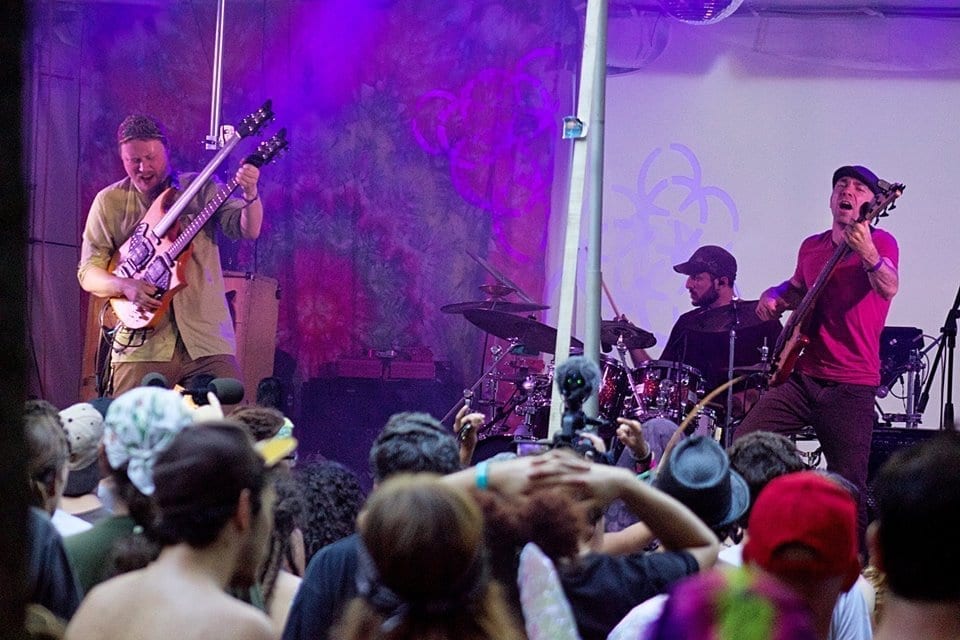 At play were many of Gabriel’s funky pedal guitar tones, and the most epic of those was the incredibly soulful sax-guitar-tone solo he played mid set. The multi-colored, undulating motion of their midday audience, deep into the festival’s camping woods section on the Vernville Stage, was a clear litmus for how truly wonderful day two of this 20th year celebration was. On the main stage was a band called The Original Wailers.  They are, as you would surmise, a tribute to the great Bob Marley, and they are adept at the material.   They played selections from the album, Legend.  It was done with reverence and respect, and there was nothing wrong, but it comes off as unimpressive.  The band was formed by Al Anderson who played lead guitar on several of the most popular releases by Marley.  To be frank, the result was underwhleming.  You be the judge: Select cuts: 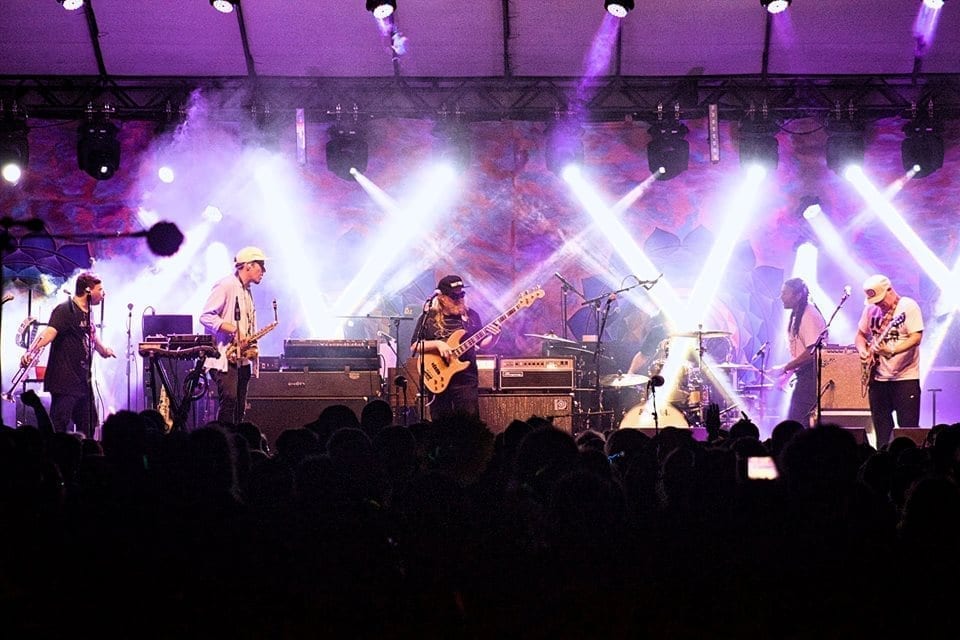 Towering over Saturday night was no doubt one of the most hyped acts for the entire weekend – funk legends, Lettuce. For all the buzz building up, the band delivered big time, and it probably didn’t hurt that Saturday was keyboardist Nigel Hall’s birthday.

A “Happy Birthday” sing along found its way into the middle of two explorative, jam-heavy sets from the band. Asking around afterwards, the consensus from fest goers was: “that was a true Wormtown Lettuce set.”

Space Carnival performed what was reportedly one of their last shows ever–rumor is there may be only a couple more before the band takes an indefinite hiatus. Not surprisingly, their set this weekend was extra powerful. 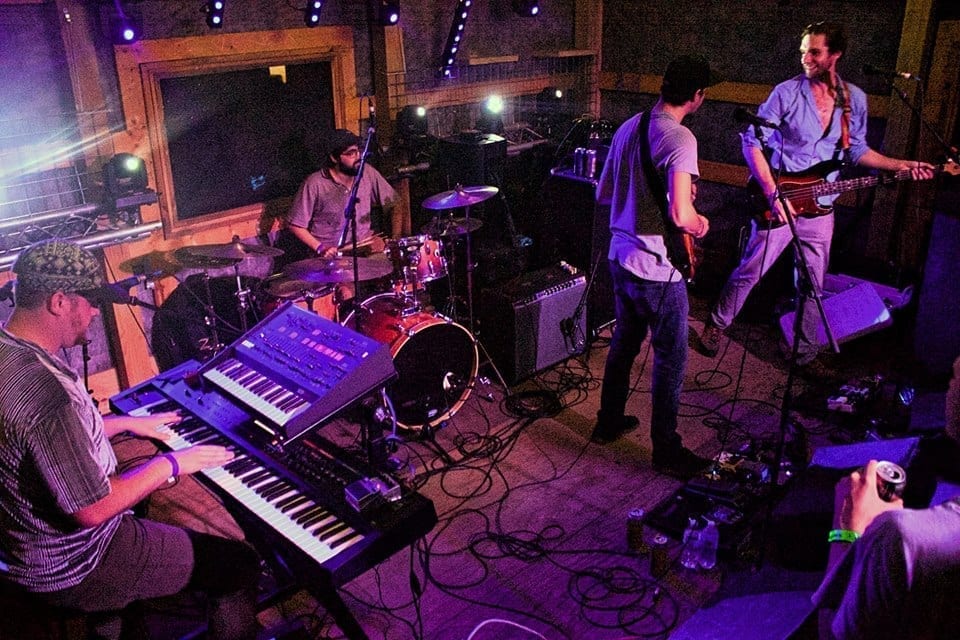 Some of the highlights were a terrific cover of Prince’s 1999 (a metaphor for the end of things?), which the band fleshed out extensively into a gorgeous type two jam and an encore mashup that included covers of Smash Mouth’s “All Star” and Phish’s “Weekapaug Groove,” both of which had the crowd beside themselves even at 4AM.

One of the highlights of the entire day was the first set in the Wormtown late night cabin, the legendary ska and reggae band, the Skatalites.  They had Van Gordon Martin on guitar, Ken Stewart on keys, and of course, the legendary Dorren Shaffer on vocals.  Always impressive is Jamaican drummer, Sparrow Thompson, whose playing is a virtual tutorial on ska and reggae rhythms.  The band was full of horns and of course, bass, and was just incredible, throwing down a dozen and a half songs to a crowd that was surprisingly huge for the cabin and incredibly appreciative.  I wasn’t sure how a set by such an historic band that was playing reggae and ska in the most traditional way would go over within a Wormtown event, but it could not have gone better.  The Skatalites were called back for two encores, and honestly, people were going nuts.  This was a great illustration of the advanced ear of your average Worm, able to appreciate something for which they may not be so familiar, but should  be, and recognizing the founders of music that they love now in its most pure form. Full show audio:

Rivaling any set of the weekend though, were the Alchemystics, also one of Wormtown’s hometown rockers. 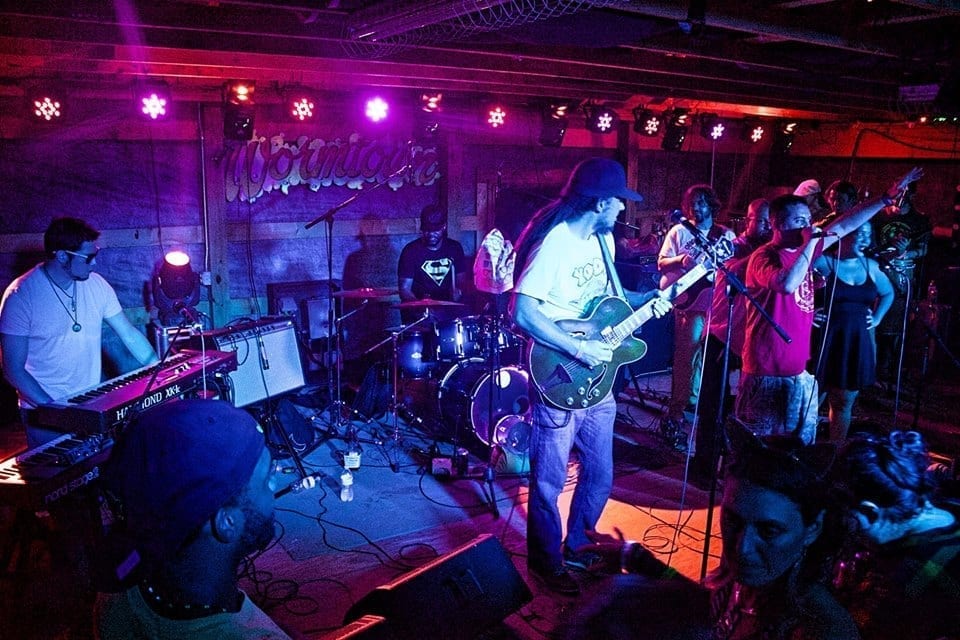 They truly threw it down hard with incredible passion, and all the way until 5 AM! Several straight hours of late-night playing, and the band was really in the zone the entire time, inviting guests like Lettuce horns and other rappers and vocalists up to make for a huge Wormtown family jam party.

Former members of the band joined in the fun as bassist Garret Sawyer (now with the Gaslight Tinkers) and Jason Metcalf (now of Rhythm Inc and others) were a part of the celebratory atmosphere.

WHEW!!  What an incredible day of music.  It was hard to believe that another day was on tap for Sunday!  Stay thirsty my friends…