I’m just gonna come right out and say it: I’m not a huge fan of the Grateful Dead. That’s not to say I don’t like them- because I do- 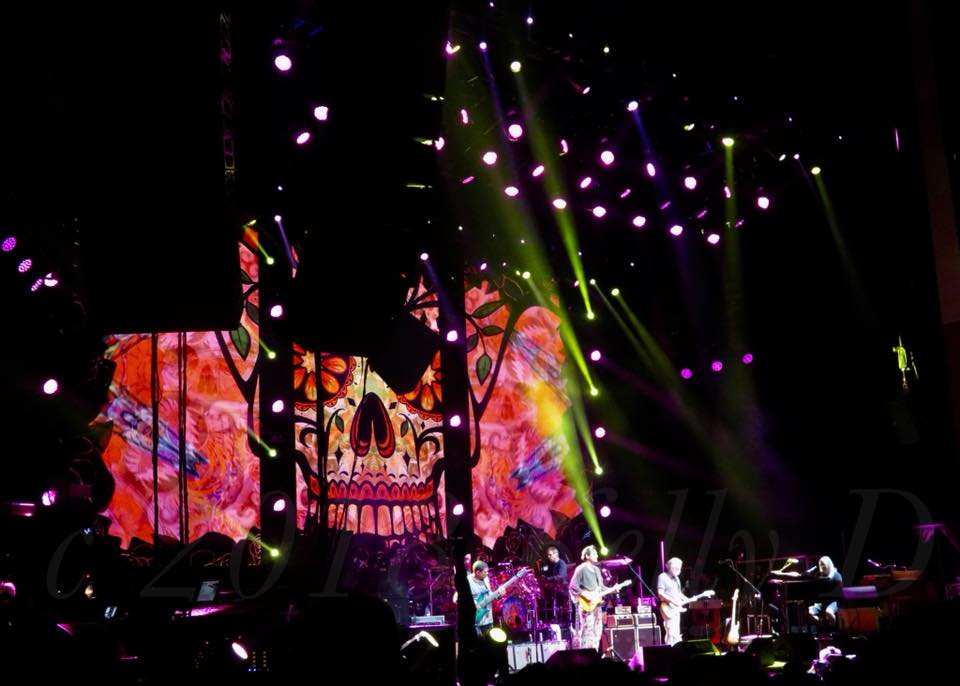 but I’m certainly not a Deadhead by any means. However, while my rabid fandom is with another band (Rush), I appreciate the mark the Dead’s legacy has left on that invisible bridge between bands and fans. I know plenty of older friends of mine who boast of seeing the Dead in the 1970s and ’80s 40, 60, 75, 100+ times! Those numbers seem like they’re from a bygone era (until you meet a Deadhead who’s also a Rush fan with a credit card- but that’s another thought for another article) and speak to the collective quest to see what setlist the audience would get on any given night. Is there a “Dark Star” or “St. Stephen” in the mix tonight? Or tomorrow? The Deadhead mission was clear: You’re just gonna have to show up and find out, and maybe sell some grilled cheeses on Shakedown Street to help pay for gas money to get to the next show.

On a humid night in mid-June, my companion and I caught the current incarnation of Dead & Company at the former Hartford Meadowlands, now XFINITY Theatre. Whatever feelings of crushing claustrophobia upon entrance to the venue and disgust at the cost of drinks and food evaporated when we got to our seats- damn near 13th row, stage right.

I had seen Dead & Company once before at Fenway Park in July 2016, on a similarly steamy evening. It was with a great pal and the setlist was aces but hoo boy, it was HOT without any cover. The shed at the Hartford theater was much more of a relief.

The opening jam between original guitarist Bob Weir and newcomer John Mayer soon transitioned into the “Hell in a Bucket” from the Dead’s 1987 album In the Dark. Ya know, the one that had “Touch of Grey” on it. I gleefully sang the chorus to my companion: “I may be going to hell in a bucket, babe. . . But at least I’m enjoying the ride.” To my chagrin, I realized from our vantage point (kickass as the proximity to the stage that it was) that I couldn’t really see Oteil Burbridge, the bassist, unless he would move closer to the other two axe-wielders. The drummers, Mickey Hart and Bill Kreutzmann, were similarly obscured but I could hear them well. I had a good view, though, of Jeff Chimenti on keys. I caught him in a surprise appearance last summer at the Green River Fest, when he was performing with Joe Russo’s Almost Dead.

I have no idea if this was a stylistic choice on behalf of the musicians onstage, but the second set was substantially more mellow than the first. The first part of the show featured “Cumberland Blues” tucked in the middle, a twangy number from 1970’s Workingman’s Dead. After a lengthy intermission, the band began Set 2 with “Feel Like a Stranger,” a lowkey disco-y groove from 1980’s Go to Heaven. Maybe it was the tasty truffle mac and cheese bites I consumed during the break along with the slow tempo, but a feeling of utter relaxation came over me. I even sat down for a bit for the “Drums>Space>jam>third verse of Viola Lee Blues” just to take in the trippy background imagery behind the stage and soak in the music. The graphics throughout the night alternated between fractal shapes and heavy skull and roses imagery (because of course) and even some peace signs for good measure.

Perhaps the highlight for me, the non-Deadhead, was the last official song of the show before the lone song encore: “Not Fade Away,” the Crickets classic covered by damn near everyone but kind of adopted by the Grateful Dead. The song turned into a love letter shared by both the band and the thousands of fans, as they (including yours truly and my companion) sang the refrain, clapping in time, over and over and over even when the band had left the stage: “You know my love will not fade away.”

Is there a better, and more simple, way to tell a band their music has impacted your life forever? If there is. . . I haven’t heard it.