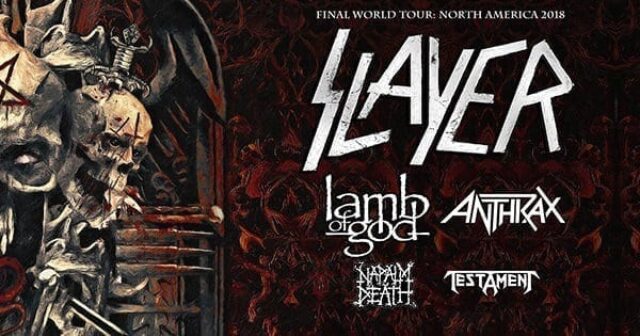 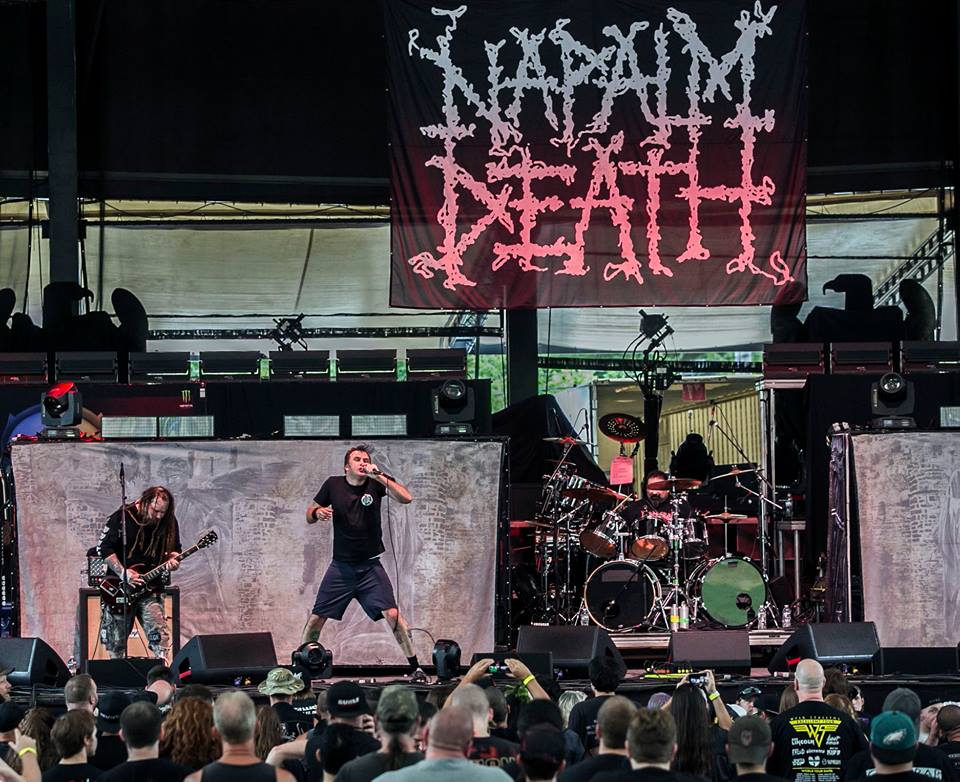 By today’s standards, 37 years is quite a long time for a band to amass a legendary catalogue of music that defined a genre. Through 12 studio albums and countless years of incessant touring, a four-piece from Southern California became the poster children for thrash metal, the object of many protests from the PMRC and record labels over offensive imagery and lyrics, and aligned themselves next to Metallica, Megadeth and Anthrax as one of the “Big Four” metal acts of the last four decades. If the longevity of the band and its devout fan base was ever to be questioned, this past Tuesday at The Pavilion at Montage Mountain in Scranton, Pa. served as both a send off and thank you to a band that has deservingly garnered itself one of the most iconic crowd chants in metal: fuckin’ Slayer.

Before the metal gods took the stage, a harem of acts who were influenced by Slayer warmed the crowd up beginning with Napalm Death who kicked off the festivities with a solid 30 minute set to a crowd that was just beginning to enter the venue. Although their set was brief, Napalm Death (who replaced Behemoth on this leg of the US tour) got the crowd fired up for the rest of the evening. Check out the gallery of photos from this show on our facebook photos page, or directly here.

Fellow California thrashers Testament delivered a thumping eight song performance that had lead singer Chuck Billy wailing on older songs like “The New Order,” and offerings from its latest effort, 2016’s “Brotherhood of the Snake.” The aggressive dark riffs of original guitarists Eric Peterson and Alex Skolnik were front and center for the entire set, and were done with a “call and answer” format on the closing number, the fiery “Over The Wall.”

Perhaps no band on the bill had a closer affiliation to Slayer than their cohorts in the “Big Four,” Anthrax. Also going on 37 years, the thrash gods – led by legendary vocalist Joey Belladonna, and legendary facial hair guru and rhythm guitarist, Scott Ian – stormed to the stage and immediately broke into a jam on the Pantera anthem, “Cowboys From Hell.” The long-time rhythm section of bassist Frank Bello and drummer Charlie Benante led the five piece through a melodic run through the appropriately-titled “Caught In a Mosh” from 1987’s “Among the Living,” which enticed one of the earliest mosh pits of the evening. Along with being known for their speed metal, Anthrax also garnered notoriety for some of their covers, including a famous collaboration with Public Enemy on “Bring the Noise.”

While there was no Chuck D material performed in Scranton, Anthrax did deliver their take on the speedy Joe Jackson number, “Got the Time.” Following a take on Trust’s “Antisocial,” Anthrax left the crowd with its old anthem, “Indians” which featured Ian frantically covering his trademark flying v guitar.

Easily the most energetic band of the evening, Lamb of God, took the stage to thunderous applause and instantly brought some of the heaviest sludge guitar of night with the driving “Omerta.” Lead singer Randy Blythe’s growling vocals were the guiding force throughout most of the set, and his high energy stage show had the crowd in a frenzy during the hour-long set. Most of the band members have been together since the mid 90’s (under their former moniker Burn the Priest), although they didn’t perform any material from its 1999 debut as Burn the Priest. The band focused on its mid 2000s releases “Ashes of the Wake” and “Sacrament,” which are arguably two of the heaviest albums to come out in the last 15 years. 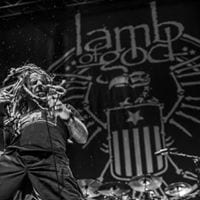 Blythe demanded the crowd “form a circle like old times” during “Now You’ve Got Something to Die For,” and the crowd easily obliged and offered one of the most chaotic scenes of the night with people crowd surfing, moshing and flailing their way about the mammoth pit. Utilizing a multiple song encore, Lamb of God left the mostly sweat-soaked crowd with the one-two punch of “Laid to Rest” and “Redneck” before giving final praise for the bills headliners.

When it was finally time to celebrate the godfathers of thrash, the quartet kicked off a career-spanning set with the title track from its last studio album, 2015’s “Relentless.” From the start, bassist/lead singer Tom Araya sounded in fine form, with his signature high screaming guiding the band through each ferocious number. The dual guitar assault of “Blood Red” from 1990’s “Seasons in the Abyss” was handled flawlessly by Gary Holt (replacing original guitarist Jeff Hanneman who died in 2013) and band co-founder Kerry King. As synonymous with the band as the limit-pushing imagery they implore, King’s stage demeanor has remained unscathed over the last 37 years. His long black beard, bald head and prominent tribal art tattoos are accentuated by the “metal clothing” the band helped usher in – black clothing mixed in with leather pants and silver chains hanging from his waist. 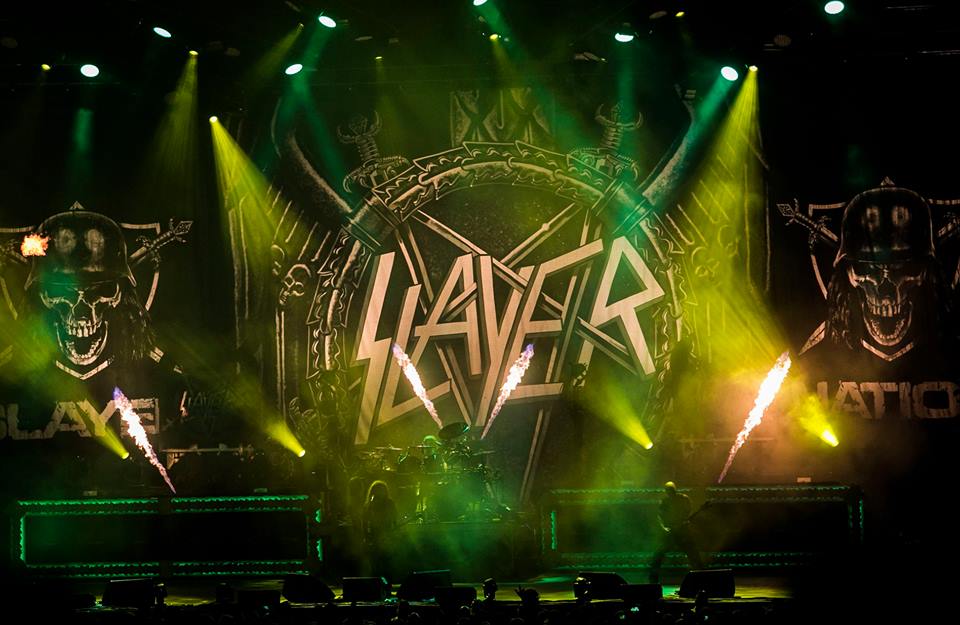 Aside from his clothing, something else King is known for – aggressive headbanging – was a fixture for the night, with King hunched over and his head constantly thumping back and forth with his speed riffs. It’s something that has become the norm for metal bands, and is also something that Slayer helped usher in back in the early 80’s. Not all Slayer songs have to be insanely fast, as was evident during “Mandatory Suicide,” a driving mid-tempo song from 1988’s “South of Heaven.” The song is also a perfect example of Slayer pushing boundaries with song titles and imagery.

As another example, the band delivered “Jihad,” a song that was written after the 9/11 attacks and shares the events from the perspective of one of the attackers. The band went back to its 1983 debut “Show No Mercy” for a frantic run through the earliest number of the night, “Black Magic.” While Araya did handle the vocals with near perfection on Tuesday, his voice did struggle a bit to hit the high notes of the song, but he is no longer the 20-year old he was on the original recording. Check out the gallery of photos from this show on our facebook photos page, or directly here.

If Slayer has ever had a “hit” song, it would be the pounding “Raining Blood” which was executed with precision in Scranton, with drummer Paul Bostaph (who replaced former drummer Dave Lombardo) leading the four-piece with driving rhythms. A staple of Slayer shows, “Chemical Warfare” from their 1984 EP “Haunting of the Chapel” served as an appropriate final nod to the bands beginnings. As a tribute to Hanneman, the band ended the show with the dark “Angel of Death,” a song Hanneman wrote after reading about infamous Auschwitz doctor Josef Mengele.

Through all the controversy, protests and record label battles, Slayer has maintained its spot as the godfathers of the speed/thrash metal movement that carries on today. After 37 years, the band has solidified its place in American music, and with this tour being billed as their final world tour, Slayer has nothing left to prove to anyone. They have left an undeniable mark on the music of today and years to come. Most importantly, they have left a world that – as only Slayer can do – will always be painted with blood. 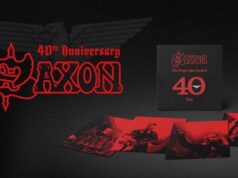