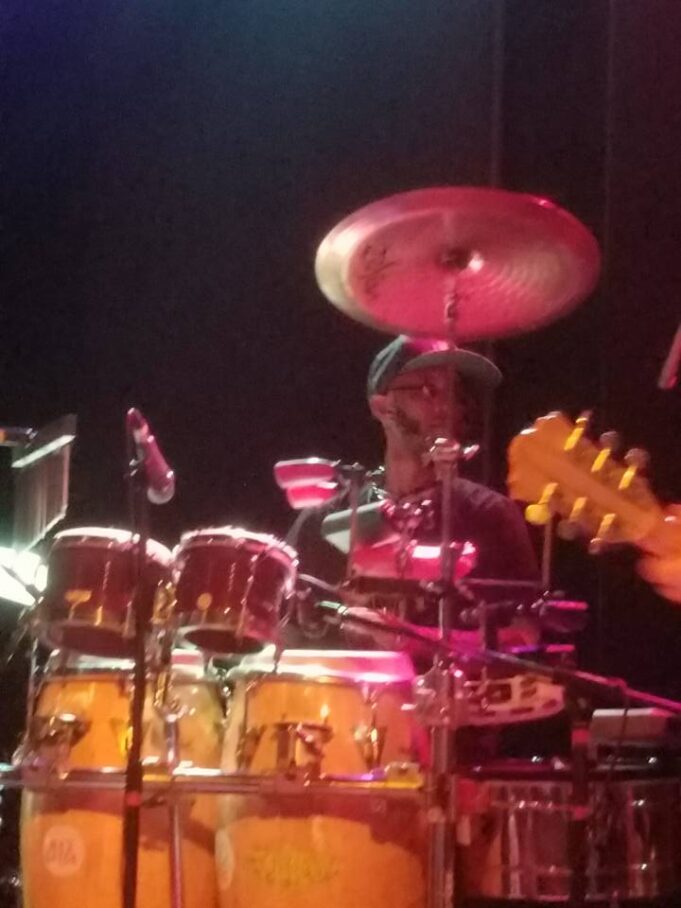 Audio of the first eight songs of the show:

It’s been almost exactly a year since Max Creek had been to the Pearl Street Ballroom and in the interim I have seen them in Boston, Jerry Jam, Strangecreek, Wormtown and even on a cruise ship all over the Caribbean. So I feel like I’m pretty familiar with the band and I am willing to say boldly that this show was highly unusual, filled with songs I had not seen in the decades that I have been attending Max Creek shows.

The show started with a duo support act in Danny Mayer and Mary Corso. Both are well-known both locally and nationally as members of the Valley’s Beau Sasser’s Escape Plan, but also touring nationally in the Eric Krasno Band. This was the first occasion that the band has played as a duo together in this format and they had a nice crowd in front of them. Corso’s bluesy voice and Mayer’s adept guitar work make for an entertaining duo and I am looking forward to seeing where they bring this coupling into the future.

In a quick visit with the two of them during the break they alluded to hoping to add a stomp board to their set up to add a little percussive flair.

Creek took the stage in an incendiary fashion and had no problems immediately lighting a blaze with the opener, Jones. About 6 minutes into the song my wife and show partner turned to me and said “Can you believe it’s only the first song?” Mark Mercier followed with The Band’s Don’t Do It which continued the high vibes established so early on. John Rider took the mic with his I Want You to Know and the show was off and running.

Midway through the first set, the first guest arrived. Scott Murawski took the mic and said “Long ago and far far away, this guy was the original Max Creek drummer.” Bob Gosselin took his place behind the drum set, from where Bill Carbone graciously vacated and the band fired into a contemplative version of The Field.  Another old school classic followed in Rainbow. Finally Mark Mercier took vocal control with a spirited version of Me and My Uncle.

With Carbone back on the throne, his friend from Escape Plan Mary Corso returned to the stage for the first of the totally unexpected bust outs.  Fiona Apple’s Sleep to Dream was a perfect fit not only for Corso’s voice but turned out to be a smart move for Creek- you could feel the energy on stage build. It was a little surprising to see some of the band members mouthing the words along with Corso, whose voice is incredible by the way, as I would not have expected nineties era angst pop to be among Creek personnel favorites.

But, it turns out that Murawski has been doing that song for years with Mike Gordon band and has done it with Creek before, too!  He’s apparently an Alanis Morissette fan, also.  That is one of the things about Creek, you are constantly learning about them and their musical influences.

Corso’s bandmate Danny Mayer returned to the stage for the Rolling Stones’ Dead Flowers. Rider and Corso traded verses just as Murawski and Mayer would trade licks throughout his time onstage with the Creek. Mayer’s style was an interesting voice for the country licks of Keith Richards rock country cross over and I was surprised to here him say that it was not a usual read for him.

Corso left the stage but Mayer stayed for Murawski’s fiery Louisiana Sun. Scotty stayed on slide guitar the entire piece, and he and Mayer traded licks with a ferociousness, almost as if they were throwing the licks at each other at times. Mayer proved his salt and earned his spot on the stage without problem.

A lengthy set break saw the vast majority of the audience hit the sidewalks surrounding Pearl Street to have smoke breaks. I was able to run into and catch up with owner Eric Suher during that break and we talked about the newish policy allowing re-entry. Anyone over 21 at this show, and presumably future Pearl Street shows, would be allowed in and out privileges. The changing nature of state and local laws allows the venue to be less fascistic and allows for a much better vibe at their shows.

Suher has been much maligned in the local music scene of late but I was able to see his point that he was forced by local law enforcement to be strict in the past in order to maintain his licensing and to keep amazing show coming to Northampton. The complexity of these issues is sometimes lost on fans and surely his venues have their challenges, but I found my experience on this night to be extremely pleasant and the atmosphere at the Pearl Street to be greatly improved. Give credit where it is due. Additionally Suher expressed a strong desire to welcome Max Creek and their fans into the room and expressed his hope that it would happen again soon.

While there weren’t additional guests for the second set there was still plenty of surprises under foot. Starting with a not out of the ordinary Orange Sunshine which was played with plenty of energy, the surprises were already on deck. Mark Mercier busted the Dr John song song Television which I can not recall ever having heard before. John Rider followed with You’re the Only One for Me replete with skull and crossbones adorning his bass amp courtesy of Creek crew. The bust outs continued with the first time I could recall hearing Max Creek play the Blind Faith classic Can’t Find My Way Home with Mark Mercier taking the lead vocals.

Bill Carbone took the vocal mic for his ethereal Wouldn’t it be Nice which always seems to inspire creativity of mood and lick selection out of Scott Murawski. There was a natural mood transition into the Max Creek classic Heartbeat which is a personal favorite and I can’t remember the last time I have heard them play it. It’s such a simple song from a progression standpoint but allows for such emotional build from the vocals and guitar solo section that the impact is quite significant.

The rock and roll staple I Know Your Rider concluded my evening personally, as we have an almost one hour drive from Northampton back to the farm. But I left fully satisfied even though I was just short of the true ending of the show. Sated by the creativity and welcoming nature of this band that I have been seeing now for my entire adult life, spread over thirty years now- the drive was warm from the afterglow of one of the hottest Max Creek shows I have seen in quite some time. Those who are going to the Super Creekend next weekend best buckle up, and perhaps consult their notes from Creek past, as two nights at the Met provides ample opportunity for them to keep the surprises coming.