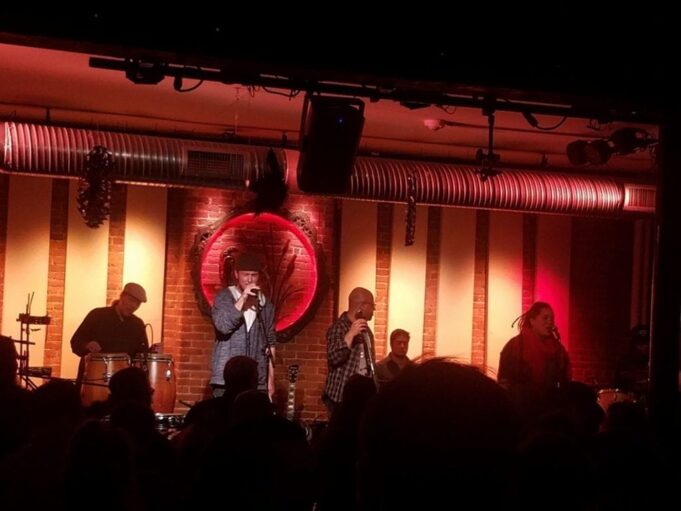 It was a fun night in Greenfield for sure.  Rhythm Inc and the Alchemystics at the Hawks and Reed Performing Arts Center.  There was a great crowd, great tunes, great libations, an all around fun night out on the town. Full show audio of Rhythm Inc:

Rhythm, Inc started the night with about an hour of reggae mixed with hip hop.  The band continues to evolve getting tighter and better every time I’ve seen them.  They have come a really long way from the Red Door in Greenfield to now becoming one of the more popular reggae infused bands in the Pioneer Valley.  Simon White has developed his voice and presence into his own style and partnered up with Giles Stebbins they make a dynamic front pair.  Brian DiMartino was in fine form picking out guitar lines throughout the night while soaring on ripping guitar solos when it was his turn to shine. Jason Metcalf and Andrew Atkins are anchoring a rhythm section, on keys and bass, and on that night they were joined by Dave Noonan on drums.

Normally Rhythm Inc has Jay Stanley on the drums but on this night he was up in Portland Maine with his other band, Max Creek.  Noonan is a spectacular drummer with a rich history in the region.  In the last few years I have seen him behind the kit with the Alchemystics, rice – an American Band, his own band Green Island and on this night his steady hand, phrasing, and creativity all made for an amazing Rhythm, Inc show.  Metcalf has found his legs with this band, more creatively shaping his performance with sounds and tones that are now fully integrated into the band.  Atkins has found his own comfort too and his bottom end is perfectly suited with Rhythm Inc’s current sound.  Ten songs and the band completed a very solid set.

After a break, the Alchemystics hit the stage.  They too have evolved, survivors in every sense of the word.  I only got to stick around for about an hour but they ranged their way through originals and covers, older and newer songs.  The current lineup is comfortable with each other and have established their sound in this iteration.

Ian-I and Force are anchoring the front of the band on vocals and emcee, with Ilana handling both backing vocals and her own features throughout the show. On this night Chris Regan from Fear Nuttin Band was handling bass duties and is able to lock with drummer Freddie McCondichie for a tight and rock solid section.  Together they also are in total communication and tune with keys man John Corda.

The Alchemystics have had a very busy last couple of months with shows in Maine, NY, CT, NH and MA.  The band members seem to be really grooving each other and appear to be on the cusp of a creative burst.  It seems as if the band is at a current peak, and entering a cocoon with a new band to evolve in 2018.  I’m personally very excited to see it. During the 9 songs that I saw the band played original classic like Dance Upon the Corner and Fire.  Ilana Morris had a cover medley that included Natural Woman, I Want You Back and Allen Stone’s Loose.  Percussionist Matthew King had his own feature with a great rhythmic tune, too.  (Stay tuned for his big show FEB 9th in Greenfield where he will premier his project TapRoots.) Hawks and Reed itself was bumping.  It felt like a couple hundred people and one of my companions remarked that the audience was full of eye candy.  I recognized dozens of people from the local music scene and the audience ranged from pre-teens to seniors.  The dance floor was packed most of the night and the pairing of the bands made for a real showcase of local favorites.

Not the full show, but 9 songs by The Alchemystics.