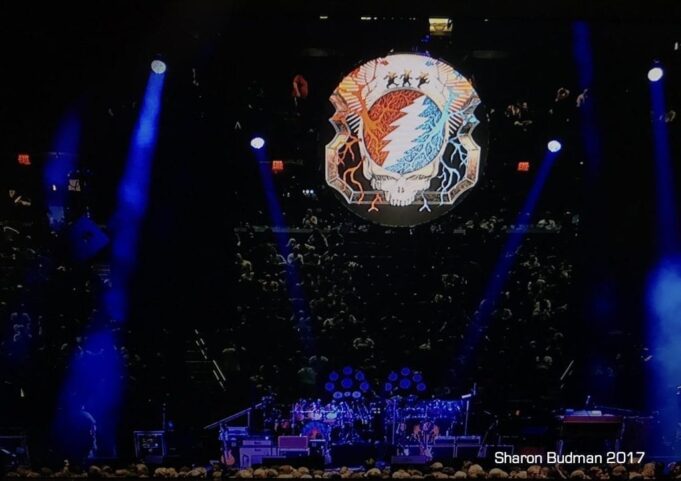 Wanna write a review or story?  Drop us a line at [email protected]

Check out the full gallery of photos by Sharon Budman here.

He left a legacy, and that legacy lives on through the music.

The Garden was abuzz… filled with Deadhead kids of every age. This week, I had the pleasure (and I mean PLEASURE) of being at both NY shows (Sunday, 11/12 and Tuesday, 11/14) at Madison Square Garden where Dead & Company (D&Co.) kicked off their 2017 fall tour in style.  Like every show before, each night they played an entirely different set list. Under the coined phrase “never miss a Sunday show” — well, I never do and this was no exception.  Time and time again the anticipation of going to a D&Co. show just fills me with an air of excitement thinking about: what will they play, what will be the opener, who will sing what, will they let Oteil sing, will there be one encore or two and what will it be?  It builds and builds; you just can’t wait, and I couldn’t wait.

Over the last several years, I have been exposed to various reincarnations of the music and the bands that play the music of the Grateful Dead, most notably, Dead & Company. Having attended every Dead & Company NY show since the band’s inception, the first show October 31, 2015, at the Garden, I have witnessed their evolution.  Built on improvisation, jams, and transitions from one tune to another, the music and house that Jerry built continues to live on. The special energy of the Tuesday night show was incomparable. From the first note to the last, they were ablaze on Tuesday night.

Each of them, in their own way, whether the fire in Bob Weir’s voice or through his guitar, the rhythm of Bill Kreutzmann’s drums, the vibration of Mickey Hart’s beam, the wizardry of Jeff Chementi as he plays the keys and Hammond B3, that voice and bass of the incomparable Oteil Burbridge, or the voice and improvisation of the very talented John Mayer, were ALL ON point and on target.

They were energized, HOT, unreal, and simply incomparable that night; the show was indescribable, NO words, ON fire, or shall we just say “DEAD” on! Mayer’s command of that guitar and his interpretation, energy, showmanship and finesse were outstanding; he lit the place up. He isn’t Jerry Garcia, he is John Mayer and his performance was top notch… and that was evident especially during “Slipknot.”

Another memorable highlight for me was Oteil’s heartful and beautiful vocals on “China Doll.”  Let’s not forget Chimenti on those keys with a constant smile on his face, he is a just a master on the piano & Hammond B3; brought the house down.

Those Rhythm Devils do it for me every time –  Drums & Space –   regardless of their setup (though they seemed to very much enjoy their new light-up electronic set up) makes ya wanna just shake your bones… and that beam – OMG the BEAM – that just rocks my soul. Oh, and let’s not forget the accompanying graphics and lights, well they were awesome too.

Last but definitely not least, Bobby on vocals and guitar, on this 2nd night was strong and fiery, clearly having a good time. To me, Dead & Company appears to be a good synergistic blend of the old and new…  three original members of the Grateful Dead, Bobby (70), Billy (71), and Mickey (74), melding with John (40), Oteil (53), and Jeff (49) bringing us to a happy place delivering the music we love.  It sure was a memorable night.

From the video channel of Sean Roche:

All in all, I felt a special energy with this second show; these guys were having fun… which is really what it’s all about. The graphics and lighting were outstanding.  Even those behind the stage had a great view. There was something for everyone. The music was amazing and the sound incredible. The Garden was hopping, everyone was on their feet, singing, and dancing.  Just a bunch of very happy, kind people! Until next time…. which for me may be sooner than later.

Wanna write a review or story?  Drop us a line at [email protected]

Check out the full gallery of photos by Sharon Budman here.