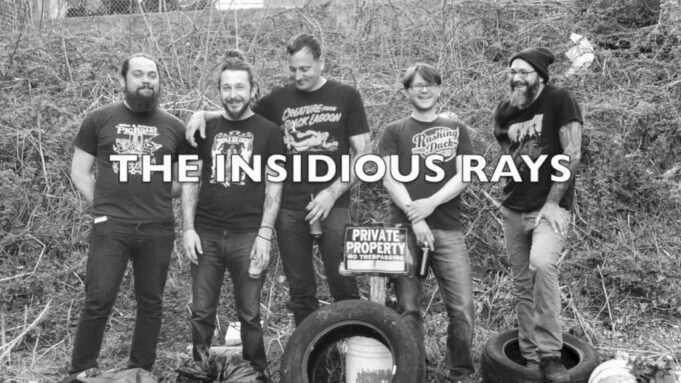 How did a punk-inspired band from Bethlehem, PA  wind up at a jamband music festival in Greenfield, MA? The story is too good to be true.   I’ve met and known Jon Braun for years as the frontman of the Talking Heads tribute band Start Making Sense.  They played several years ago at StrangeCreek and during the exit meeting between Jon, his band’s booking agent, Phil Simon (Editor’s note: full disclosure- Phil is also the founder/editor-in-chief of this here publication), and longtime festival organizer Derek Kipp the conversation turned to an interesting piece of history- Jon is the drummer for the The Insidious Rays and Derek is a huge fan.  On Sunday, it was great to visit with Jon at the 78 Clothing booth (formerly Old 78 Clothing) and meet the other members of the band on that beautiful rare sunny afternoon.

These guys got their start in 2001 as a three piece, 4-track recording project with Matt Juknevic on vocals and guitar, Jon Braun on drums and vocals, and Michael Davidson originally on bass, but now on guitar.  On this occasion, they were joined by Seth Juknevic on bass and Chris McDermott on guitar and  keys.   While their roots were definitely punk at their core, I enjoyed hearing other blended elements of music such as country, progressive rock, and metal, with lyrics heavily influenced by Frank Zappa.

And don’t expect these guys to take their own songs seriously.  While other bands wax poetic about the human condition – destroying the world, raging against the government, or cursing the betrayal of a loved one, this band loves to poke fun at those same themes, especially in their country tunes.  They weren’t just about the dog dying and the factory closing, they were blunt and real about when you know your woman’s cheating on you because you can taste it on her lips, because her mouth has been places it shouldn’t.  (I’d love to divulge the name of that particular song, but I should keep this article clean.  However, I’m sure you know exactly what I’m talking about.)

If Frank Zappa sang country, this would probably be his signature song. These guys are high energy, tongue-in-cheek, technically demanding, and so much fun to watch and dance to.  The Insidious Rays played at Riverworm in the middle of the afternoon and drew a small crowd, but I’m positive that given a late night slot in the woods or a cabin play, this band could really take their audiences places. The Insidious Rays played their “final” show back in 2007, but the band has begun to shake off the mothballs to play a show here or there, when the members aren’t involved in other musical projects.