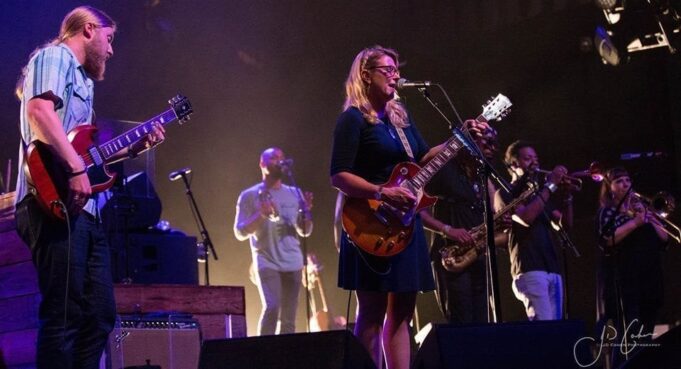 From the video channel of Mitchell Shechtman

Since their first concert at the Savannah Music Festival on April 1, 2010, Tedeschi Trucks Band have been perfecting their craft, and wowing audiences with their rock, soul, and rhythm ‘n blues performances. Although they have been building a dedicated following for over a decade, the band seems to be always breaking through to new audiences and attracting their largest crowds ever on this most recent tour.

On July 7, 2017 Tedeschi Trucks Band, along with current tourmates Hot Tuna and The Wood Brothers, filled the house at the stunning 3,100 seat Providence Performing Arts Center. The PPAC opened in 1928 and has been operating pretty much continuously ever since. On this night, the band’s light show was on full display, adding both color and beautiful psychedelic designs to complement the ornate theater, and accompanying the powerful wall of sound produced by the 12-member ensemble. The band opened with two songs from their most recent release, “Let Me Get By,” “Anyhow,” and “Laugh About It.” “Let Me Get By,” in particular, has a gentle and slow-building fire that features the full band and makes for an ideal show opener. Like so much of the Tedeschi Trucks Band material, the song features some beautiful guitar playing that builds to an explosive crescendo. The two openers were followed by Derek and The Dominos’ classic “Keep on Growing,” and then the hauntingly beautiful Beatles cover “Within You Without You.”

The band then turned it up a notch with “Just as Strange,” also from the album Let Me Get By, and the bluesy Sleepy John Estes tune “Leaving Trunk,” which was  accompanied by guitarist Oliver Wood of The Wood Brothers. This was one of the highlights of the evening, as Trucks and Wood jammed with TTB keyboardist Carey Frank and extended the tune straight into Rahsaan Roland Kirk’s “Volunteered Slavery.”

It was unfortunate that neither Hot Tuna’s Jorma Kaukonen or Jack Cassidy, whose own set was somewhat marred by audio problems, came to join TTB on stage at any point.

Check out JD Cohen’s full gallery of photos from this show here.

The second half of the night really featured Susan Tedeschi, who sang beautifully on some of the band’s most familiar material, including “Bound for Glory,” “Angel From Montgomery,” “Sugaree,” and “I Pity the Fool.” Tedeschi has truly made the Jerry Garcia, John Prine and Bobby “Blue” Bland covers her own, and it’s a treat to see her flex her pristine vocal powers, and move from the quieter ballads to the more hard-edged blues numbers.

Vocalist Alecia Chakour also continues to be a real standout, at times almost stealing the show. The last song of the almost two-hour set was the percussion and guitar driven Carlos Santana instrumental, “Soul Sacrifice.” The band closed the evening with Joe Cocker’s “Space Captain.”

Keep On Growing
(Derek and the Dominos cover)

Within You Without You
(The Beatles cover)

Will the Circle Be Unbroken?
(William MacEwan cover)

Get What You Deserve
(The Derek Trucks Band cover)

From the video channel of Aaron Cutler