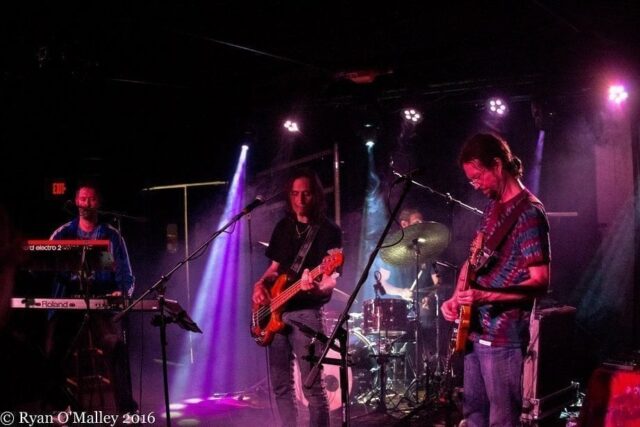 This past Sunday marked the first time in four years that perennial Deadhead favorite John Kadlecik returned to the River Street Jazz Cafe in Plains, Pa. For the returning fans, Sunday’s show went above and beyond the first appearance, mostly due to the powerhouse band Kadlecik has behind him for his current tour.

The John Kadlecik Band took the stage right around 9:15 and instantly had the crowd grooving to the opening number “Cleaning Windows,” which featured some soaring organ work courtesy of new keyboardist Todd Stoops, a familiar name of the jam scene for the last decade. A trippy run through the Kadlecik original “Seen Love” lead into a bluesy Jerry Garcia Band version of the old standard “That’s What Love Will Make You Do.” If Kadlecik’s guitar playing can be associated with any artist, it would be Garcia. While the tone of his playing is clearly reminiscent of Garcia, Kadlecik is not trying to copy the late guitarist, instead paying tribute to the style he made famous for four decades.

Other first set highlights included a speedy take on the Grateful Dead chestnut “Deal,” and a thumping rendition of the latter-era Dead classic “Throwing Stones,” which showcased the tribal rhythms of drummer Nathan Graham. For someone who is known as a Garcia musician – mostly for his multi-year roles in Dead offshoot band Furthur and tribute act Dark Star Orchestra  – Kadlecik did a superb job leading his band through the Bob Weir number. The Garcia original “My Sisters and Brothers” provided a solid ending to the first set, again featuring some brilliant fills by Stoops.

Kicking off the second set, Kadlecik guided the band through a faster tempo version of the Dead’s ballad “Sugaree.” Having played with two of the Dead’s founding members, Kadlecik has a thorough understanding of using the music to explore new territory. If someone needs a better understanding of what making the music your own is all about, anytime you can catch Kadlecik do a “Sugaree” is a perfect example. A Kadlecik original – the rocking “Golden Wings”  – led to a country-laden part of the night in the form of “Hard Highway” and the twangy “Dim Lights, Thick Smoke (And Loud, Loud Music,” the latter of which featured some great harmony from bassist Klyph Black, a recurring character at the Jazz Cafe due to his involvement with the Zen Tricksters and Jam Stampede.

A tender version of The Beatles’ “Dear Prudence” segued into a dance-friendly version of the Jerry Garcia favorite “Don’t Let Go.” Keeping with the funky feeling of the previous number, Kadlecik enticed a dance party with a driving take on J.J. Cale’s “After Midnight,” that would make even Eric Clapton proud. Going back to the Garcia/Robert Hunter material, Kadlecik breezed through a moving version of the Garcia Band classic “Mission in the Rain” before getting one more singalong going with a spot-on take of the Dead’s biggest hit, 1986’s “Touch of Grey.”

After a quick band introduction, Kadlecik ended the night with a somber “Like a Road,” a heartfelt staple of the Jerry Garcia Band, which proved to be the perfect way to cap off one of the best nights at the venue in recent memory.

With his current lineup intact, Kadlecik seems to have found an excellent outlet for what he wants to do with his career. On any day the band sounds like a well-polished unit should, but on a really good night – like Sunday – the band sounds like everything you want live music to be.

Live Music News & Review was born out of a love of live music and the wish to chronicle the amazing shows happening around the country. Stories and reviews are born both from our editorial board and from readers just like you around the country.
Contact us: lmnandr@gmail.com
5,254FansLike
198FollowersFollow
303FollowersFollow
6SubscribersSubscribe