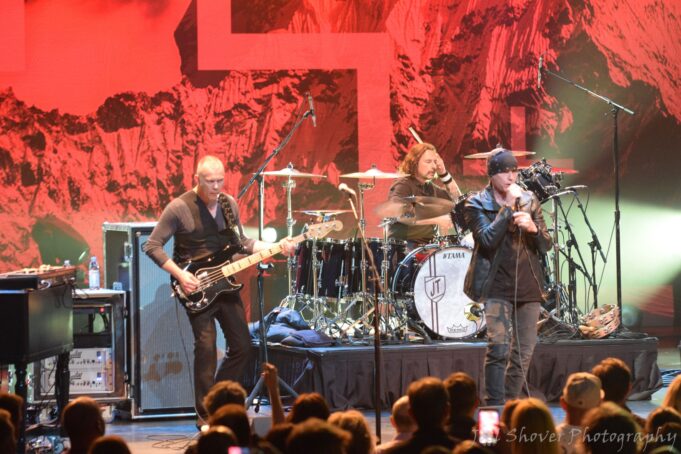 The Cult kicked off their North American Tour in Florida’s Bay Area on April 21st 2022 at the Duke Energy Center for the Arts in the Mahaffey Theater by Joel Shover.

I have been a fan of The Cult since my childhood days and I was just as excited to see them today as I was the first time I saw them in Springfield, MA with Bonham and Dangerous Toys on February 4th 1990. The Cult’s albums stand the test of time and that’s how they recorded them. Similar to the likes of Led Zeppelin in the sense of the whole album is the story not just one single that is a hit.

The palm trees were swaying as the wind was coming off the bay outside the absolutely gorgeous Mahaffey Theater. Food trucks were on site to provide some classy nosh and frosty beverages, while Tampa Bay’s 98.7 The Shark (WPBB) had all the fans waiting already rocking out to the picturesque waterfront views.

The doors opened and fans were led into the 2,031-seat theater boasting nothing but pure elegance. Tonight, The Cult would be added to the long list of historic sold-out shows performed here with the likes of Journey, Phish, The Wallflowers, Bob Weir & RatDog, and Deep Purple to name a few. The merchandise lines grew long and the beverage lines longer, as fans loaded up on newly designed t-shirts and other swag.

The lights dimmed at approximately 8:30pm as the band took the stage to the gothic anthem “Angel” recorded by Massive Attack. With everyone in place on stage and some last-minute tuning this took us into an explosive “Sun King” opener. Ian Astbury’s voice took command of every fan old and new alike as the distinct sounds of Billy Duffy’s guitar echoed through the majestic Mahaffey theater. As I looked around, I could surely see that we were all part of this “Cult” now.

“New York City” was the next hit that the band unleashed. I couldn’t tell who was more excited for this return to the stage after a two-and-a-half-year hiatus, the band or the crowd!  The band caught their breath as Ian addressed the Florida fans excitedly mentioning that it had been two and a half year too long! “Automatic Blues” kept the crowd rocking with either a fist or a cell phone in the air with those signature power chords being ripped by Billy Duffy.

The crowd erupted as the first licks were struck by Billy for “Sweet Soul Sister”. They sang word for word along with Ian. That song will be a ghost in the walls forever in the theater. “Soul Asylum” Rocked us into “Edie (Ciao Baby)” which featured Astbury showing that he still has that poetic tone to his commanding voice.

As the setlist was unfolding before our very ears it was very clear that the band was happy to be back across the pond. By now each and every one of us had gone crazy trying to tame the “American Horse.” This was our sixth song taken from the from “Sonic Temple”, the album that gained The Cult Platinum status in 1990.

“Aphrodisiac Jacket” was the first track pulled from the 1987 album Electric. Ian has such a unique sound he was the only choice to be the front-man vocalist for the Doors on their last tour. “Lil’ Devil” was the next hit from the same album.

“Oh, Peace is a dirty word. She used to be a painted bird, yeah. And war, She’s a whore. Don’t you know we love her more and more?” “Peace Dog” was the next song played from Electric. There is a reason that this album has made the list of 1001 albums to listen to before you die!

The hits kept coming with “Wild Flower”. The band then took us back to the 1985 album Love. What better way to spread love Muchacho, than with a “Revolution”?

“Rain” was the next single from Love as Duffy made it look way to easy to windmill his guitar as the assembly of fans with fists in air, rocked along. There was not one sitting fan as the band started playing the chart topper “She Sells Sanctuary”.

The world wasn’t dragging anybody down tonight as The Cult rocked on even harder.

The band took us back to holy grail of albums Electric. Buy your copy here for the great “Love Removal Machine”.

This song featured a shredding guitar solo by Duffy. See for yourself here.

At this point the band exited the stage and to the echoing chants of the crowd came back in full charging force reminding the crowd “It’s the way that you feel. It’s the truth in your eye. Cause’ your up against the world. And still you “Rise””, the only tune played tonight from the 2001 album Beyond Good and Evil. Ian sadly told the crowd this was the last song and that there was a curfew in order. That didn’t stop The Cult from an all-out assault with “Fire Woman”

The Cult is currently working on a new album that will hopefully be released concurrently with a new 40th anniversary tour in 2023.

The Cult US Tour Dates