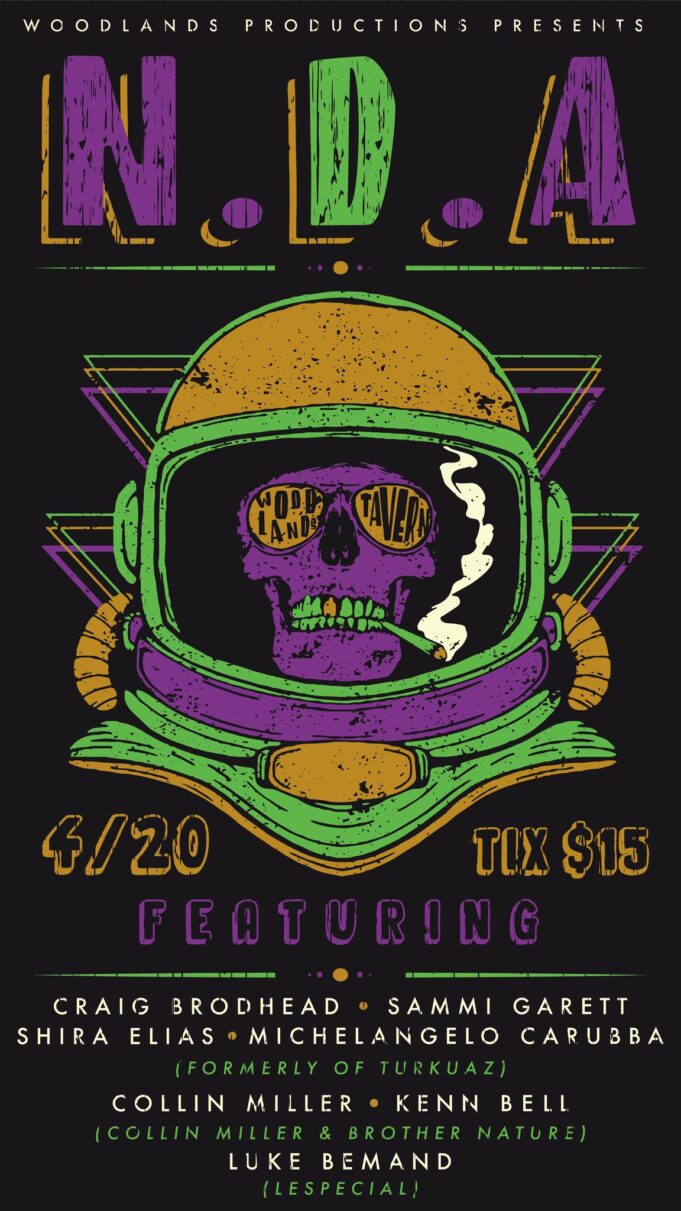 An Interview with Craig Brodhead On His Show With N.D.A. and Life Post-Turkuaz

On Wednesday, March 20th, members of Turkuaz, Lespecial, and Collin Miller & the Brother Nature joined forces as “N.D.A.” for an epic funk & soul throwdown at Woodland’s Tavern in Columbus. N.D.A. crushed it with top-notch vocals and very impressive group improvisation.

N.D.A was put together by Craig Brodhead (@craig_brodhead formerly of Turkuaz), and was made up of

We got to sit down and ask Craig some questions about N.D.A. and his life post-Turkuaz:

LMN&R: So this was NDA’s first-ever gig… Is there a future for NDA or was this a one-off?

CB: “To be completely honest we only envisioned it as a one-off thing, but we honestly had so much fun and I think we had genuine chemistry so we all left feeling like we should book some more which would be really fun.”

LMN&R: What was the decision process like when selecting who would make up this group?

CB: “In the past, Turkuaz had often done 4/20 events at Woodlands and it was sort of a home for us around that time and we had a lot of memories there. So the idea initially was to have as many of us as possible to get together and play.  The way it turned out was that The Horn Section and Taylor were were busy at that time. Mikey, Shira, Sammi and myself were all available.

Given that, we called around to a bunch of our friends and finally, people are out touring regularly again which is great but a bunch of the guys we play with regionally here were busy at the moment. Mikey suggested we call Luke from Lespecial. Turkuaz and Lespecial had toured together years ago and we were all comfortable with him but none of us had ever done a gig together. We know he’s just a really solid professional musician and takes it very seriously and that’s exactly what happened. I think we all had really good chemistry with Luke, especially Mikey.

Collin Miller is a good friend of mine from Cleveland and he is incredibly talented as a singer, songwriter and guitarist. He’s been playing some shows with The Motet recently too. I met Kenn Bell when I did some gigs with Collin’s band and we hit it off immediately so we do gigs together now basically weekly.  Mikey had also recently done a show with Collin’s band so we’re all pretty friendly with each other at this point so that was a natural fit. I really want everyone in our scene to get to know Collin and Kenn because I think they’re so special.”

LMN&R: Can you talk to me about what doing these special event shows is like? And professionally, what post-Turkuaz life has been like for you?

CB: “Yea I mean I’ve been kinda doing these side gigs for years, so in that sense it’s not so different. I moved from the east coast (CT) to Ohio so it’s a little bit of a different vibe because the jam scene here is not as much a part of the general culture as it is out east, so I’ve been doing a lot of things outside of that scene which has been pretty refreshing for the most part.

For these kind of things, it usually starts with a promoter who has a relationship with us who is frankly willing to take a risk to do a special event for a band that has no history or social media reach etc. I do think the fans like to see bands take risks and do different things, so fortunately I think usually people are excited to see what we’re gonna do.  But in terms of the nuts and bolts – there are generally folks you know you have a tight relationship with and you know exactly how you’re gonna gel together.  My Turkuaz band members, we know exactly how we’re gonna play and hang together so that’s always easy.  After that you kinda think “ok what instrument do we need? Is there anyone killing that we know that lives close?” then you just kinda go down the list.  The promoters obviously like it when people are from bands that people know and are familiar with because you get the aggregate effect. So its just a balance of all these different things to make these kind of gigs work.  Sometimes I call it “vibe math” because you just kinda go through the whole thing in your head first to see if it will work. Sometimes promoters throw out a name based on the band’s draw and you kinda gotta say “great band, very popular but I don’t think they have the chops to hit day of with basically no rehearsal.”  There are also TONS of incredible musicians that I want to call all the time that don’t really have any band affiliation in this scene but are so unbelievably good.  I’m trying to change that a bit and get people to appreciate the wealth of home grown musicians among us.

As for the second part of your question: Obviously post-Turkuaz is a huge adjustment. It really hasn’t been that long, but it definitely seems like a lifetime has gone by in some ways.  Everyday I try to just get a little closer to having a plan forward but so much of it is just continuing to play music and keep your craft and your chops solid. I’m fortunate that I’ve stayed busy and I do think I’m improving as a musician but I also really miss being on the road and playing festivals and doing all that. I know there’s no guarantee that it’s ever gonna be like it was for me but I’m hopeful that If I keep doing what I’m doing, keeping my craft strong, continuing to write and produce and giving 100% when I play other people’s music that things will work out for me. I’m trying to enjoy the ride as much as possible and I see a lot of new possibilities which is really exciting in its own way, even if I miss the band a lot.”

LMN&R:  What can your fans be excited about upcoming from you in 2022?

CB: “At the moment I’m really excited because New Orleans jazzfest is coming up which is my favorite place / time of the year and I haven’t been there since the spring of 2019.  I’m extremely, utterly fortunate this year to be playing some shows with Butcher Brown and Nigel Hall, who are some of my absolute favorite living musicians. Additionally, there are some Steely Dan and Prince tribute shows down there with seven of the nine former members of Turkuaz that I’m very excited about.

I’m also a producer & DJ under the name Yesmann and I just finished my first record which I’ve been working on for about two years and I’m stoked about it. I’ll be putting that out later this year and continuing to do work on that side of things.

Besides that I’m also playing shows with Collin Miller & The Brother Nature and I really enjoy playing that music with those people. I’m excited for everyone to get to hear that.”

I Wanna Be Your Lover – (Prince)

Doin it to Death – (James Brown)

Love the One You’re With – (The Isley Brothers)

Love Having You Around – (Stevie Wonder)