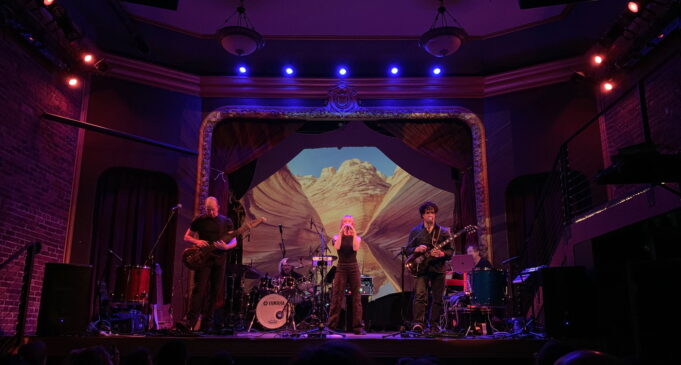 The Security Project is the eminent tribute to Peter Gabriel’s storied solo career, featuring Jerry Marotta, the drummer from Gabriel’s classic line-up (1977-1986), plus Trey Gunn from King Crimson, on touch guitar. Rounding out the band from Shriekback and Sky Cries Mary is Michael Cozzi on guitar and co-founder of Gig Performer David Jameson on keyboards and Eigenharp. The addition of Happy Rhodes, with her 4-octave vocal range, fulfills the band’s promise of re-envisioning the music of Peter Gabriel.

Leave your expectations at the door and be prepared to hear Peter Gabriel’s genre-less music like you’ve never heard it performed live before.

“I was instantly brought back to the feel & the groove of those wonderful pre “So” tours. The man himself could not do better!” – Tom Lord-Alge, Grammy Award Winning Engineer & Mixer

“The Security Project live is a beautifully reverential and creative reinterpretation of these Peter Gabriel classics!” – Kevin Killen, engineer of Gabriel’s “So” record

The members of the Security Project are:

Michael Cozzi: Originally from Wales, Michael Cozzi got his start in the mid 80’s as the guitarist for the group Shriekback. In the early 90’s, Cozzi joined Sky Cries Mary with whom he co-wrote 5 albums and toured extensively. During this time Cozzi opened up his recording studio Moscozzi Studio in Seattle. He has written and produced music for films, commercials, and video games.

David Jameson: When Dr. David Jameson is not playing with Security Project you can find him Reelin’ in the Years with Jerry, Joey Eppard and Jesse Gress or feeling pink with Beyond the Wall. Dr. Jameson is also the co-founder of Gig Performer, the acclaimed plugin host for live performing musicians.

Watch the new video of The Security Project performing “Slowburn”: