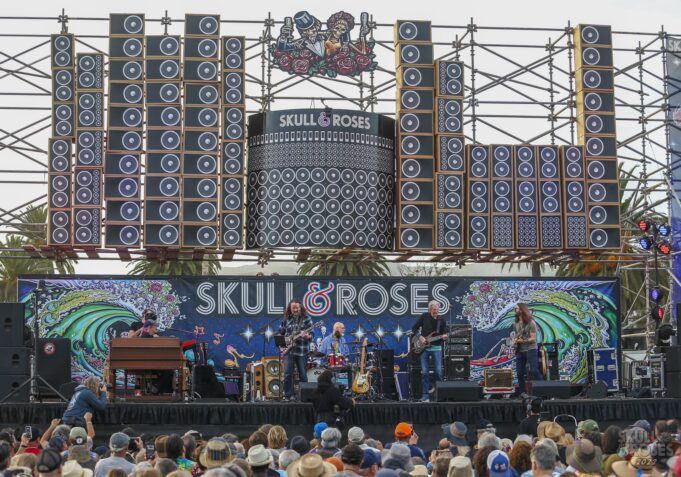 This homage festival was April 8-10 at the Ventura County Fairgrounds in California. Photos and Words by Steve Kennedy.

Skull and Roses 4 returned to the Ventura Fairgrounds to kick off the 2022 festival season.  It was a solid rebound from a two-year Covid postponement and there was sense of rebirth, celebration and relief.

Skull and Roses is a celebration of the Grateful Dead.  A place for people of all generations, genders, and races.  Freaks and geeks can gather and imbibe in all the aspects of the culture.  With a rotating 360-degree stage, Grateful Dead music was able to be played continuously all day until the hard cut off at midnight.  Patrons can then roll out to shakedown street and do some shopping, jump in the drum circle, or catch one of many late-night jam bands crushing the overnight campgrounds.

It has been an interesting journey watching the growth of Chris Mitrovich’s vision of an all Grateful Dead festival evolve.  What started small with a community of die-hards has blossomed into a full throttle legit festival.  The headliners, including an original member of the Grateful Dead, are at the top of their game.  The rotating stage with a wall of sound backdrop was on point.  There is now a VIP section complete with a bar and bathrooms.  The backstage area now has privacy tents for the bands, small grandstands for hanging out and a media tent.  The infield is packed full of heads, thick from front to back, dancing in the dirt.   With all growth, the festival still maintains a sense of freedom for the community to govern itself, and it works.

Am I going to review every band?  No.  A few of my highlights were Steely Dead, Pink Talking Fish, and Brown Eyed Women.  Did DSO blow out the playing of 4/8/72 (Wembly Pool) 50 years to the day later?  YES!  Was there disappointment?  Yes, because of technical difficulties Otiel & Friends, the Saturday night headliner, had their set cut drastically short when they ran into the mandated hard cut-off at midnight.   Many were disappointed after a long wait and much anticipation for Otiel’s set.  Did the presence of Phil Lesh dropping absolute bombs make things feel all is right in the world?  Hell yeah!

King Solomon’s Marbles
Water in the Desert (with Alecia ??? on vocals)
That’s What Love Will Make You Do (Little Milton cover)
Like a Road
Midnight Moonlight
Palm Sunday

Another highlight:  The Dusty Strings Exhibit.  This exhibit featured instruments played by the original members of the Grateful Dead.  The instruments included Phil Lesh’s “mission control” bass and Jerry Garcia’s “Alligator” ’55 Fender Stratocaster used during the Dead’s historic 1972 European Tour.  The collection is stunning and was a historic monument to the legacy of the Grateful Dead’s tools.  Anyone who enjoyed walking the exhibit had to feel a sense of awe at the amount of music the instruments have created.

If you love or are curious about the Dead, this is your place.  To fathom a scene like this 27 years after Jerry’s death is mind-blowing.  There is not any other band that has cover bands from all over the country playing their music at this magnitude.  It’s a scene that is not only surviving but thriving.   Many of the Grateful Dead’s crew, people who worked and toured with the Dead, were there.   Dennis McNally, Rosie McGee, Susan Millman, and BIG Steve were all present.  This gives further testimony to the foundation of the community.  There were also many representing the next generation.  Kids experiencing their first festival, learning the music, and feeling a part of the culture.

Was the festival perfect?  Maybe not.  Maybe there could be more room by opening up the racetrack?  Maybe there could be more access from the campgrounds to the music venue?  Maybe there could be a designated area for chairs, separate from the dancing area?   But what does Skull and Roses get right?  Inclusiveness.  I really felt there was something there for every Deadhead.  The festival organizers do an excellent job of making folks feel part of something big, something fun and something that is special.  This year had an extra special vibe.  It signaled a movement forward together, as we move through the pandemic into the future.  From tapers, videographers and photographers, artists and dancers, sound and light guys, partiers and wharf rats, the tribe is resilient and continues to prove that without love in a dream, it will never come true.