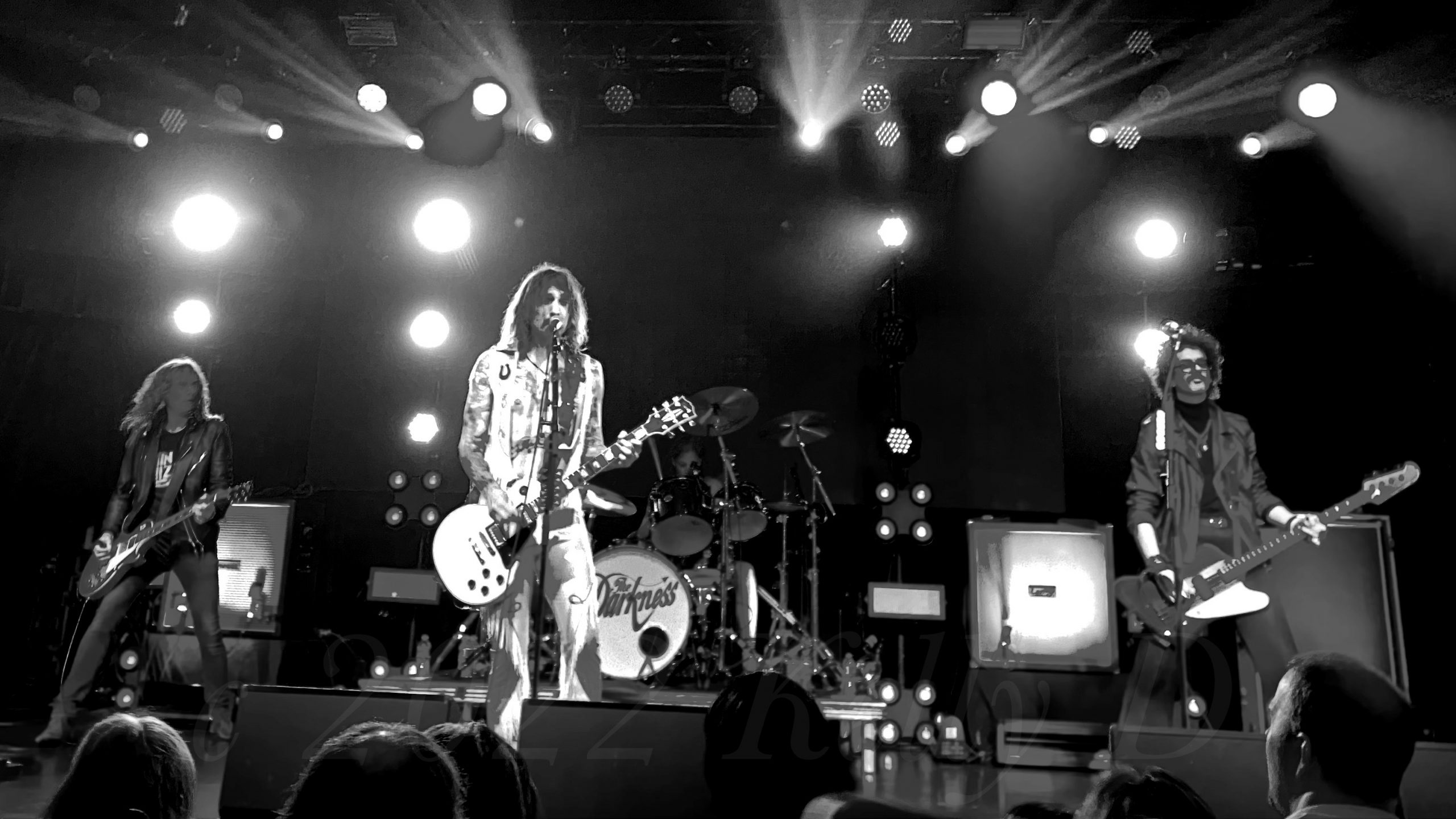 The Darkness with The Dead Deads

It is a truth universally acknowledged that The Darkness are guaranteed to melt your face during one of their live performances, whether you’ve been a fan for 19 years, like me, or are fresh to the magic, like my partner.

‘Twas my third time seeing the boys in Boston, the first being in 2016 at the Paradise and the second in 2018 at Royale, where they came back for a repeat show this time around in 2022. Ending their tours in Boston seems to be a convenience for routing purposes and for me specifically, a born and bred Masshole. In general, the last two times I’ve seen them the shows- according to fellow fans in our Facebook group The Darkness Army- the energy emanating from the band had a certain je ne sais quoi that only the end of a tour and the thought of going home to sleep in their own beds can provide. For example, in 2016, frontman Justin Hawkins decided to hang from the Paradise balcony and (not so) gracefully drop into the crowd into his fans’ arms. At Royale, while there is a balcony it’s a bit higher up and therefore there wasn’t much of an opportunity for such antics. In 2018 though, the hijinks took the form of Justin nicking audience members’ accessories for him and bassist Frankie Poullain to wear onstage and trying to whip plectrums into the dangling chandeliers suspended from the nightclub’s ceiling.

This time around, after an all too brief performance by Nashville’s The Dead Deads (watch out for them- you know you need a band that sounds like a cross between Foo Fighters and the Breeders with some Icky Thump-era White Stripes in your life), we were treated to an immediate incineration of our visages as The Darkness took the stage and slammed into the opener from their new album Motorheart, “Welcome tae Glasgae.” “One Way Ticket,” perhaps one of the best and funniest songs about cocaine addiction with a bitchin’ cowbell intro, followed soon after. There was no stopping. We were on this train and no one wanted to get off. . . Except we all got off, if you know what I mean.

There was less direct crowd participation than the last time I saw them (everyone’s clothes remained on their own bodies, except for Justin’s “Rhinestone Cowboy” costume change from a hot pink jumpsuit moment to a white fringed exposed chest catsuit before “Black Shuck,” and drummer Rufus Taylor removing his sweat-soaked shirt and tossing it into the crowd before the encore- oh, and Frankie changing from his leather jacket look to a Rush 2112-era satin robe for the end of the night), but Justin had plenty to chatter about. At one point, he was asking if we would still love the band even if they aged and got too much Botox (the answer was resoundingly affirmative), and then at another point trying to remember every single tour date they had performed on this tour.

Throughout the evening, it was hard to believe it had been four years since I’d seen them last. The camaraderie both on the stage and in the audience was palpable. My partner and I were squeezed comfortably in the fifth-ish “row” between fans of all genders who knew almost all the words to every song. Guitarist Dan Hawkins, in his trademark Thin Lizzy tee, was taciturn per usual but had no problem trading licks with his brother and Frankie and even taking the spotlight for more than a few rock star moments himself (see photos).

Some of my favorite parts of the show: Justin offering the mic to a tiny thing in the front row for her to bellow “BARBARIAN!” starting the song off right; Justin doing his trademark handstand/feet clapping in front of Rufus’ drumkit for “Get Your Hands Off of My Woman”; Dan, Justin, and Frankie all constantly tossing plectrums into the crowd like so much confetti. A Darkness show is not only a display of their bitchin’ musicianship- and it is certainly that- it is really everything you want a rock concert in a nightclub to be.

Watch all of Kelly D’s videos from the show HERE

In a sweet instance of admonishment, Justin requested (then began scolding those who weren’t listening) we put away our phones during “I Believe in a Thing Called Love” for the encore. I heeded him till the last few minutes of the song and then managed to record the entirety of the slow burn of “Love on the Rocks with No Ice” (its inclusion in the setlist must’ve been sweet release for the woman behind me who kept screaming for it throughout the second half of the set. . .), including Justin wading into the crowd on his roadie’s shoulders which was a glorious repeat of a similar move at 2018’s show.

May these rock gods continue to thrive, flourish, and prosper for many more years to come. I know I and many others will be with them every scissor kick of the way.

I Believe in a Thing Called Love