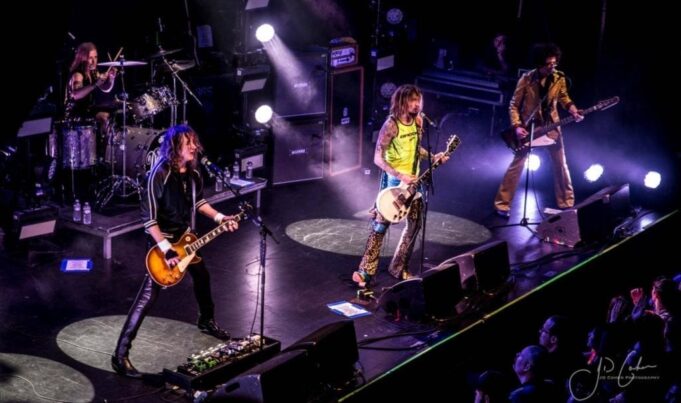 The Darkness with Diarrhea Planet Royale, Boston, MA April 22, 2018
Story and video by Kelly D
Photos by JD Cohen Check out the Live Music News and Review.com Facebook page for updates and announcements.

Don’t come to a Darkness concert unless you’re prepared to peel off your outfit and toss it onstage to frontman Justin Hawkins- at his behest, of course. That’s what happened this past Sunday night in Boston, a favorite city of the UK-based cock rockers. The wiry, shaggy-haired Hawkins had approximately 3.75 costume changes throughout the evening to add to the spectacle of hard-driving anthemic singalongs, crowd-surfing, and oh so many plectrum tosses.

I’ve been a huge fan of the Darkness ever since I was 15 in fall 2003, when their debut single “I Believe in a Thing Called Love” premiered on MTV and VH1 (remember those?). Every morning I would sit and eat my breakfast cereal before school watching music videos by the likes of Alicia Keys, Christina Aguilera, and Coldplay. . . So when I first watched the bizarre sight of Hawkins poncing about a spaceship filled with naked statues and smoking hot tubs, positively screeching out the lyrics, I was electrified. Back then, Hawkins was sporting a mouthful of Big Book of British Smiles snaggleteeth and a mane of cascading pink-tipped hair- not to mention a silver jumpsuit exposing his concave chest with a glittery headband to match. His bandmates, brother Dan Hawkins on guitar and bassist Frankie Poullain, were glammed up but to a lesser degree.

This is all to say I instantly fell in love with them. What easily could’ve been a throwaway record (entitled Permission to Land) was chock full of glam rock bangers, memorable hooks, and plenty of British charm. In the 15 years since their debut, the Darkness have replaced their first drummer with Rufus Taylor (spawn of Queen drummer Roger Taylor) and cranked out four more records. I finally got to see them live in May 2016 on their “Back in the USSA” Tour. Their recent release, called Pinewood Smile, is the reason for their current “Tour de Prance.” Nashville rockers Diarrhea Planet opened. They’re pretty much in the running for “worst band name ever” but their stage presence and overall sound belied their terrible, terrible moniker. This exchange from Wayne’s World kept running through my head:

Thankfully, Diarrhea Planet was quite good. As a six-piece, they filled the stage and many of the members spent their half-hour set leaning on each other as they wailed on their axes, traded grins, and generally had a blast with each other. Recognizing how cool it is in fact to open for the Darkness, they led the crowd in an audience participation maneuver to coax the Brits out of their green room and onstage. Then they launched into their song called “Bob Dylan’s Grandma” and lead singer Jordan Smith stage-dove into the throngs of fans to really seal the deal.

After an intermission featuring classic rock staples, a corny 80s-sounding instrumental came over the stereo. Soon, the quartet descended from backstage, basked in the cheers, and launched into “Open Fire” from their 2015 effort Last of Our Kind. I noted the difference in stage costumage and Justin’s overall visage. When I saw him in 2016, his hair was in a sort of pageboy cut and even had braces. This time, however, he had proper rockstar length locks and he often flashed a smile with perfectly straight white teeth- and was wearing a leopard-print jumpsuit with fringe. Dan was in his established uniform of jeans, T-shirt, blazer, as was Frankie in his- only his standard happens to be a gold lamé suit straight out of the 1970s and a white man ‘Fro. Rufus was shirtless for much of it, as per usual. There’s something to be said for consistency.

For the next 110 minutes or so, the Darkness thrilled us, chilled us, and fulfilled us. They’re this ineffable combo of being totally aware of how ridiculous they are and fully basking in it anyway, inviting everyone to join in. And they are in fact quite good at creating music too, which certainly builds their case. In between melting faces aurally in several minute-length chunks, Justin was the consummate emcee for the evening. The man seems like he was born with a microphone in his hand.

Which brings me to his requests for fans’ clothing: upon inspecting the audience, he demanded a woman give him her mustard yellow beret at the show’s end. After he dubbed himself “a Mustard Revolutionary,” the fan then whipped it from the crowd into his hand for him to wear then and there. Predictably, he looked amazing. A blistering rendition of “Black Shuck” from their first album was the next logical choice. Later on in the evening, he snatched a fan’s biking jersey, garish orange headband, and “what ‘futuristic’ must’ve looked like to sunglasses designers in the 80s” shades and then launched into the a cappella chorus of “Friday Night,” segueing into the real thing. They ended up playing a whopping nine songs off Permission to Land and five off Pinewood Smile and a couple from LoOK and 2012’s Hot Cakes. Alas, perhaps my favorite record of theirs only got the title track performed: “One Way Ticket (to Hell and Back).” Frankie whipped out his cowbell to knock out the opening notes into his microphone, which made for a pretty damn cool sight especially since he had since donned the “Mustard Revolutionary” beret cast off by Justin. Then Justin stopped the song for several minutes to attempt to hurl guitar picks into the club’s ceiling fixture. While he was unsuccessful at his initial quest, many lucky fans got the plectrums that fell beneath the- as Justin called them- “upside-down jelly molds. Oh, you call it Jell-O, don’t you?”

From beginning to end, the crowd could not be bored. There was dry ice. There were slamming power chords. There was thrusting during “All the Pretty Girls.” There was headstand feet-clapping at the end of “Get Your Hands Off My Woman.” Dan and Rufus and Frankie, while largely silent except for providing backup vox, held their own as their showman whirled around them.

See more of Kelly D’s videos of the night at her YouTube channel HERE.

However, the climax of the show came just as it should, towards the end of the evening. Justin informed the crowd that they could only perform a few more songs. What came next turned into tour de force performance art featuring all four members who gamely played off each other for the sheer joy of the audience. And guess what? I got it all on video! Nowhere else can you listen to a ditty called “Jesse’s from the Union” segue into a countrified version of “I Believe in a Thing Called Love” (mused Justin, “Wouldn’t that be DISGUSTING if that were our rendition of that song? I almost just wanna leave the stage and have you sit with that for a moment”) or “Dead or Alive” Bon Jovi turn into an uncanny valley “Sweet Child O’ Mine.” The real kicker, though, was the extremely satisfying conclusion of a frantic female fan’s cries of “‘Love on the Rocks’!” from the balcony all evening- and her wish coming true as an eleven-minute-long slow burn of a finale. https://www.youtube.com/watch?v=F3Zk9HaKipo The music scene sure has changed since I was 15 and the Darkness was just starting out. Nowadays, I’m pushing 30 and the Darkness are seasoned professionals and have probably seen it all in the biz, but we’ve all grown with the times. Gone is the importance of music videos unless they’re in 60-second backstage clips on @theactualdarkness‘ Instagram- but you bet your mustard beret I’m following them. It’s quite comforting to know that in a world full of hipster musicians putting on airs that they’re too cool for school, we have these four men proudly wearing their gold lamé and leopard print jumpsuits (or no shirt to speak of) and scissor-kicking ass in spite of AND because of it all.