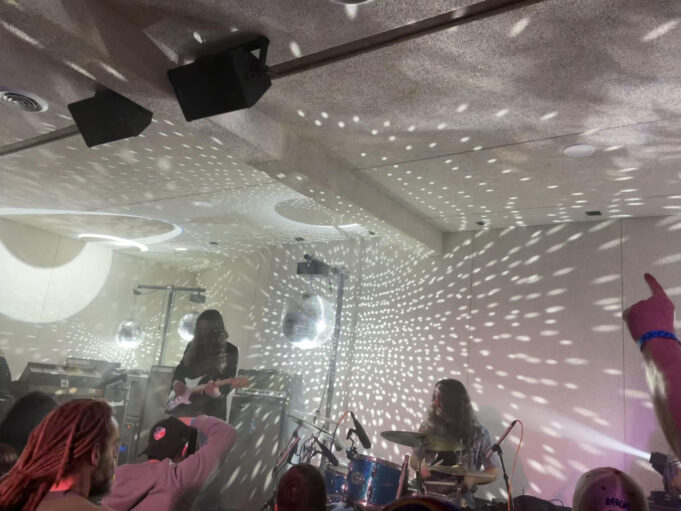 This Circles Around The Sun tour with Mikaela Davis is unbelievable. They stopped by Columbus, Ohio on Sunday, March 20th, and put on an incredibly special show. Circles Around the Sun and Mikaela Davis recently collaborated on a new single, Language, and the pairing of these two acts feels a lot like a match made in heaven.

Early on Sunday evening, one of Ohio’s greatest music venues, Woodland’s Tavern, was already packed full with hundreds of fans waiting for Mikaela Davis to take the stage. She came out and from the very first second, her performance was jaw-dropping. Her harp playing and beautiful singing are unlike anything else I’ve heard before. I could’ve heard a pin drop in the room while she was playing, but as each song ended, the crowd erupted with applause and exclamations of astonishment. As she wrapped up her set, she invited Dan Horne and Adam MacDougall to play an out-of-this-world synth and percussion jam alongside her.

The stage was draped in disco balls and illuminated quartz crystals. The anticipation in the crowd was buzzing during the set break for Circles Around the Sun to take the stage. All of a sudden, the crowd became ecstatic as the band took the stage sporting flowy & sparkly disco costumes.

These guys are unbelievable in the way that they approach improvisation. Their music isn’t overly complex, yet it is incredibly infectious. The way Circles Around The Sun merges funk with a disco-feel with emotionally-rich chord progressions is amazing. The entire thing fel a bit like a drum circle. Mark Levy is the heartbeat of the band and his drumming is top-notch. His style is egoless — there were no solos and no overplaying. He simply kept the crowd entranced and dancing the entire night.

Circle’s new guitarist, John Lee Shannon, also gave off an egoless vibe. While he did rip a few solos, they were all within the context of where the whole band was taking the song. There were no theatrics and he let his incredible playing do all of the talking. Dan Horne led the band with his bass playing and hysterical banter (and some occasional psychedelic synth and percussion jamming.) Last but not least, Adam MacDougall was like a musical master scientist on the keys, giving huge amounts of character and flavor to their songs. For the encore, CATS invited out Mikaela Davis on the harp and they blew our minds one last time. I was a pretty big Circles Around The Sun fan coming into this show but after this show, I love them even more.

This band is red-hot and you can grab tickets for the rest of their tour here.

Set 2:
Hallucinate a Solution
Halicarnassus
Money’s No Option
One For Chuck
Babyman

Not from this show, but a few days earlier in Pennsylvania: