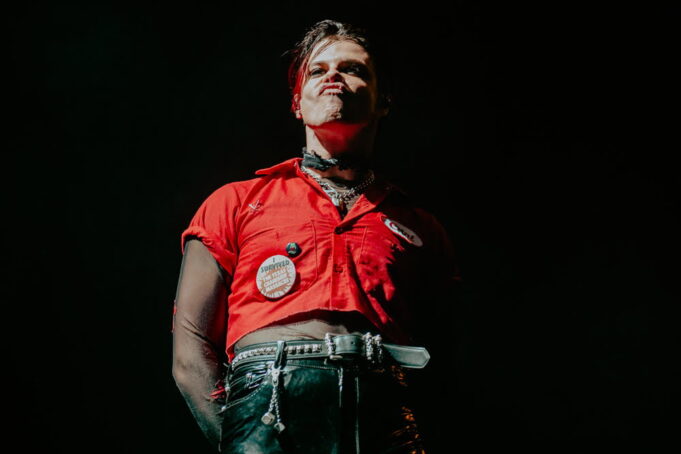 San Francisco welcomed Yunglud to the historic Warfield along with Palaye Royale, UPSAHL and poutyface on the seventeenth of March. By Justine Willard

Yungblud brought his jam-packed Life On Mars Tour to The Warfield in San Francisco on March 17th. The show included three opening acts  Poutyface, Upsahl, and Palaye Royale. Each act gave a terrific performance, making the night that much better.

To start his set, Yungblud performed “Strawberry Lipstick,” the second single from his second studio album, Weird!, which was released in December 2020. Yungblud was amazing on stage. He enjoys jumping and running around effortlessly, flipping his mic, throwing water, and spitting beer on the crowd while singing and playing the guitar.

Yungblud said he could feel the love on stage as fans kept throwing flags and hats for him to wear, and he didn’t think anyone should leave the venue with a voice that night.

The 15-song set included hit song after hit song, interludes, and even an outfit change where he rocked a leather skirt for half of the night.

Along with playing his hit songs, he also performed new songs like “Fleabag” and “The Funeral,” where the concertgoers already knew all the lyrics. He also talked about how crazy it was touring the US for the past six weeks and how the crowds kept getting louder and louder each show.

For an encore, Yungblud performed “God Save Me, but Don’t Drown Me Out,” another song from Weird! and “Machine Gun (F**k the NRA)” from his debut album 21st Century Liability.

While his US leg is over, Yungblud will begin his European tour in early May, so hopefully, we can expect some more new music before then.

strawberry lipstick
parents
superdeadfriends
The Funeral
I Love You, Will You Marry Me
Anarchist
Intermission
(Life On Mars Interlude)
mars
weird!
fleabag
Loner
Kill Somebody
I Think I’m OKAY
(Machine Gun Kelly cover)
Encore:
god save me, but don’t drown me out
Machine Gun (F**k the NRA)

Opening the show that night was poutyface. poutyface gained a significant profile through songwriting app Voisey. Check out the gallery of photos of poutyface by Justine Willard both from the live show, and from a photo shoot conducted before the show.

Poutyface is a 19-year old singer/songwriter from San Diego, CA. She is an incredible and unique artist who’s definitely in a space of her own and her new releases are catchy and nostalgic tracks reminiscent of late 90s/early 2000’s rock music. Pouty was one of the opening acts for Yungblud on a couple of his tour dates and I got to see her give an amazing performance on March 17th at the Warfield in San Francisco. She had so much energy on stage and instantly had the crowd captivated. I also got the chance to do some portraits with her after her set and she was just as great in front of the camera as she was on stage.

From a pre-show photo shoot by Justine Willard of poutyface.

Check out the full gallery of Yungblud photos here.