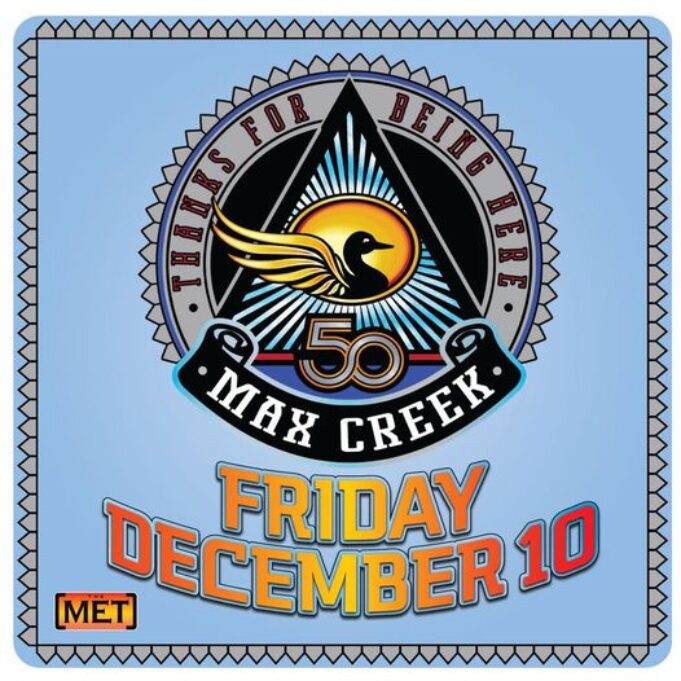 MAX CREEK perform at THE MET in PAWTUCKET, RI on December 10 2021 Review by Joel Shover

The long-awaited announcement for a Creek show at The Met in Pawtucket, Rhode Island for the holidays was imminent. Could it happen on a Monday?  Could it happen on a Tuesday?  It sure did.  Tuesday Oct 12 to be certain! So, with the announcement made it was first things first.  Tickets? check, hotel rooms? check, and now for the airfare for those coming from the around the 1500-mile mark in Orange Sunshine. How could this family be 50 already? We must celebrate.

So, all the ducks were now in a row……. or were they?? Another announcement, this one scary to the ears… A CREEK SHOW WITH NO MARK MERCIER???? Say it isn’t so! Thoughts are scrambling thoughts are jumbling wondering what might be. Rest assured everything was ok and Mark had a family emergency…and if we’ve learned anything in 50 Years it’s FAMILY FIRST!

So, the band tapped Jordan Giangreco for the job of keys, currently from The Breakfast, a Jam band from New England. I had the recent pleasure of seeing Jordan handle the keyboards for Chris & Spigs’ Rock & Roll Circus at Norwich’s hidden gem Brick & Basil back in June of this year.

The night felt reminiscent of the good old Walk on the Wild Side Wednesdays at the Living Room & the old Lupos. With CDC Covid protocols in place, you had to provide proof of vaccination to be allowed entry to the venue, and what a fine venue it is.

The ticket time was 9 PM and the first note struck by New England’s own Guitar GOD Scott Murawski was at 9:12pm With a warming rendition of DOUBLE DARE into DARK WATER that just flowed through into the next number- Jordan taking over the vocal lead for the band’s take on The Grateful Dead’s ALTHEA. From the opening notes, you could hear Giangreco expertly balancing his desire to pay homage to Mark Mercier’s tone and style, one that has clearly influenced Jordan’s playing while also blazing his own trail and taking the band in new and different jam directions.

With all thoughts coming into tonight why not take a ride on EMOTIONAL RAILROAD with Murawski on vocals everything seemed like it was running on time and the band was doing it well  Next up was Billy Carbone piping out I’LL BE YOUR BABY TONIGHT. Then things got a little trippy, Floyd style JAMs trippy were just another brick in THE MET’s walls leading into a beautiful beat filled BLOOD RED ROSES thanks to the bass of Founding Member John Rider.

There was more to be had before the end of this first set. It was a fan favorites Creek’s take on The Beatles IVE GOT A FEELING (with Scott Murawski on vocals) By this point in the evening it may have been 40 degrees outside but it was for sure 85 degrees inside Max Creek had the place warmed up.

For the second set they came out with exactly what the crowd was JONESn’ for. Then the votes were in… It was Jay for Pres, and Sir Carbone on the PERCUSSION & DRUMS that brought the crowd into a trance. You could feel the floors bouncing like those Living Room days I mentioned earlier, John Rider then took the helm once again for PEACEFUL WARRIOR the vocal load was then passed back to Jordan Giangreco for THE WEIGHT. The band then led us down to BACKSTREET WOMAN being hammered by Murawski into the crowd sing along I WILL ALWAYS SEE YOUR FACE.

It wouldn’t be a holiday show without the RUN RUDOLF RUN, as sung by Bill Carbone. The band then revisited the Grateful Dead catalog and performed GOING DOWN THE ROAD FEELING BAD, but were we feeling bad or feeling glad? The encore was IF YOU ASK ME I would say glad that we had this show at least to celebrate the Holidays.

Jordan Giangreco expressed his thoughts on this momentous night on his FB page:

“Wow what a night!! Thank you to the OG of jam bands Max Creek for calling me in to fill In for Mark (Mercier). This band still is my all time favorite.. there’s only two other bands that rage that hard on stage and one is Phish.. the other is a 4 pc from East Haven named after a meal..
The Creek fans came out full force with uncertainty with the absence of Mmmark but seemed to really enjoy what was happening.. I sure did myself after almost having a mild panic attack not knowing how I would do giving I had literally hours of notice.. Thank you Max Creek Fam…”